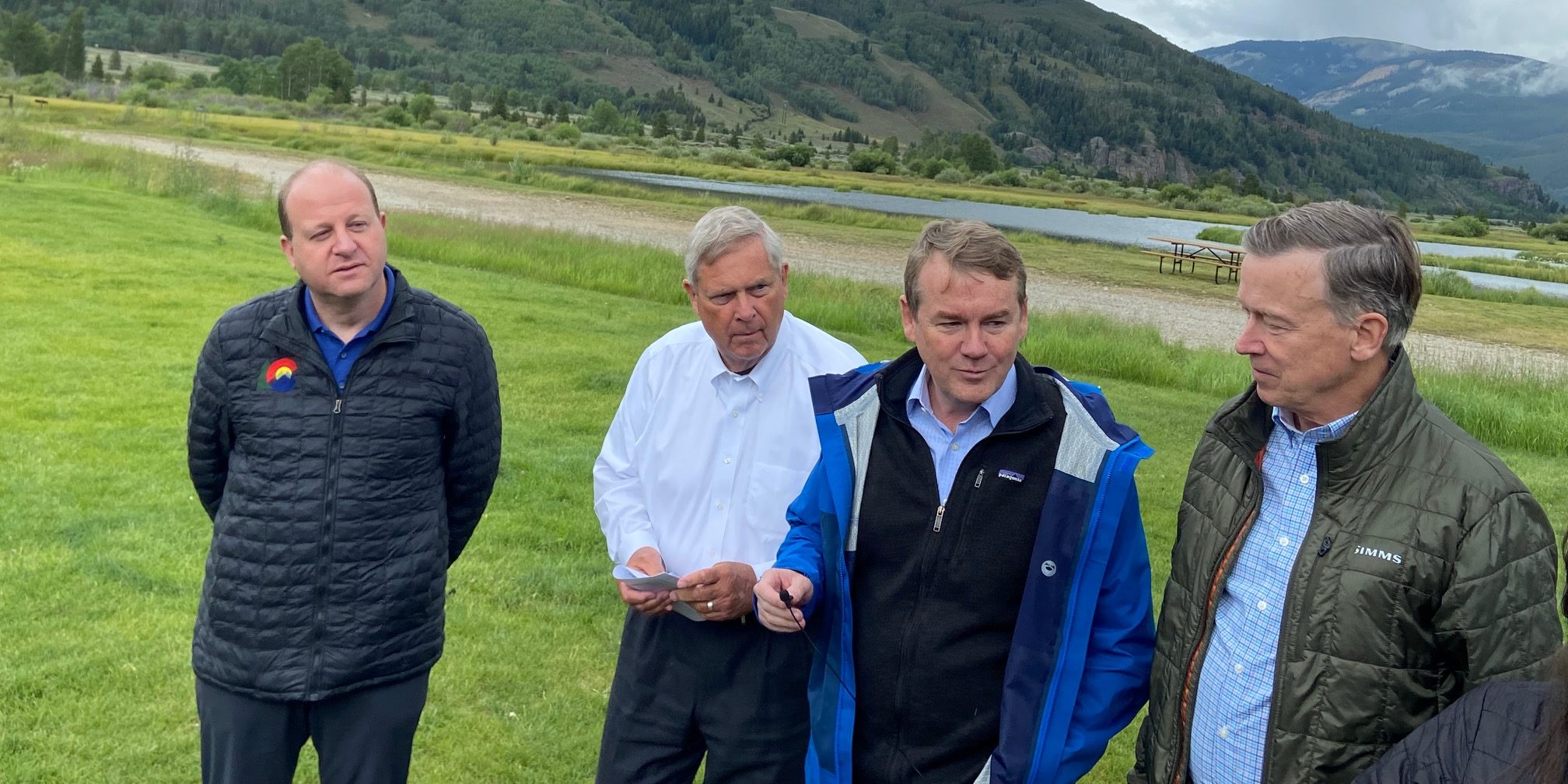 CAMP Hale, Colo. – U.S. Secretary of Agriculture Tom Vilsack, a wealthy Iowa farmer and former governor, has many Colorado connections and clearly understands the plight of the dwindling Colorado River.

Vilsack also acknowledges the urgent need to conserve Colorado’s public lands and the critical wetlands in the upper Colorado River Basin watershed, especially in the wake of Tuesday’s announcement of federal intervention to curtail water use.

But when a reporter on Tuesday, during a press conference at this historic, high-altitude military training area near Leadville, asked why the Biden administration hadn’t already taken executive action on public lands preservation, Vilsack had a long, roundabout answer.

“Let me be clear about this,” Vilsack said. “The president, basically with the help of these gentlemen here [Colorado U.S. Sens. Michael Bennet and John Hickenlooper], and others, passed the American Rescue Plan, which essentially saved the economy, when we were faced with 10% or more unemployment, and we now have record employment. Then [Biden] has shifted to doing something that many presidents have talked about but couldn’t get it done, which is a bipartisan infrastructure bill. That’s going to invest a lot of resources in this state and other states to reconnect folks in rural communities to make sure our highways, our bridges, our roads, our ports are fixed and are prepared for the 21st-century economy.

“Then he turned his attention to making sure, with John Hickenlooper’s assistance and help, that we actually become less dependent on China and others for our microchips, which basically control just about everything these days. These guys worked on this, making sure that it’s going to be made in America. And then, on top of that, the Inflation Reduction Act [IRA], which is going to lower health care premiums for many, many people in Colorado, that’s going to allow those who have insulin concerns a cap on how much they have to spend, and it’s creating new jobs in terms of construction and opportunities in terms of the climate portion of this. So, he has been very, very busy — not to mention what’s going on in Ukraine, with a united NATO. I mean, seriously.”

Hickenlooper, Bennet, Colorado Gov. Jared Polis, and U.S. Rep. Joe Neguse (D-CO) were all on hand for the tour of Camp Hale as key stakeholders lobbied Vilsack and the Biden administration to take executive action on elements of the Colorado Outdoor Recreation and Economy (CORE) Act, which has passed the House five times but is stalled in the Senate.

Hickenlooper jumped in on Vilsack’s laundry list of Biden’s accomplishments with, “He’s been busy … and reducing the deficit by $300 billion just while he was at it [a feature of the IRA]. As well as the first bipartisan gun-safety built in 30 years.”

Bennet followed with, “I’ll add, while we’re on this hallowed ground [of Camp Hale], passing and signing the PACT act, which veterans have been fighting for for years and years to deal with the toxic exposure that people have faced because of burn pits and other kinds of things.”

The House version of the CORE Act included a first-ever designation for Camp Hale as a National Historic Landscape to honor the U.S. Army 10th Mountain Division ski troopers who trained here and fought in Italy and Alaska during World War II and then returned home to launch the state’s iconic ski industry. Backers of the bill hope Biden will declare it a National Monument if the legislation can’t make it through the deadlocked Senate.

Asked if it’s all the more critical to protect public lands in the headwaters of the Colorado River from oil and gas drilling, logging, and other industrial uses because of climate change and the dwindling flows that endanger Lake Powell and Lake Mead, Vilsack again circled back to recent legislative accomplishments.

“Frankly, your question suggests that there are a wide range of actions that need to be taken,” Vilsack said. “Properly maintaining our forests, for example, is one way of dealing with the water issues, which, again, gets back to the legislation these guys just passed. That’s going to provide us the resources, along with the infrastructure act, that will allow us to do a better job of maintaining our forests. So, it’s [wilderness] designations, it’s forest management, it’s providing assistance and help to farmers to do a better job of using scarce water resources and more efficiently, it’s providing disaster assistance. It’s a lot of work that needs to be done as we deal with the changing climate and its impact on water and water availability.”

The CORE Act is a whittled-down version of Hidden Gems – a piece of legislation first championed by then-U.S. Rep. Polis more than a decade ago that would have preserved more than 342,000 acres of Colorado public land as wilderness, prohibiting motorized travel. The current CORE Act that Polis’ successor, Neguse, has moved through the House five times, would add 73,000 acres of new wilderness and 80,000 acres under other protective designations that still allow some forms of recreation.

Polis argued presidential actions on public lands protections, which can be overturned by subsequent administrations, are not a replacement for legislative action, but he added the two aren’t mutually exclusive: “Taking additional executive actions can help provide momentum for future legislative protections.”

Finally, Vilsack was asked about reversing a U.S. Forest Service decision clearing the last regulatory hurdle for the proposed 88-mile Uinta Basin Railway that would send up to an additional 10 oil trains a day along the Colorado River and down into the state’s Front Range on their way to Gulf Coast refineries.

The Center for Biological Diversity and other environmental groups – along with Eagle County, Glenwood Springs, and other jurisdictions – are suing to stop the project on environmental grounds centering on climate change, spills, and wildfires. They’re also urging Vilsack to simply overrule his own USFS.

“You know, this is currently in litigation,” Vilsack told the Colorado Times Recorder. “Folks are raising questions about the Surface Transportation Board’s decision, and it’s probably inappropriate for me to comment too much about this.”

Bennet wasn’t as reticent to address the issue: “I might take the opportunity to comment on it because I sent a letter to the secretary, asking him to take a look at it, and I hope that they do [reverse the USFS approval].”