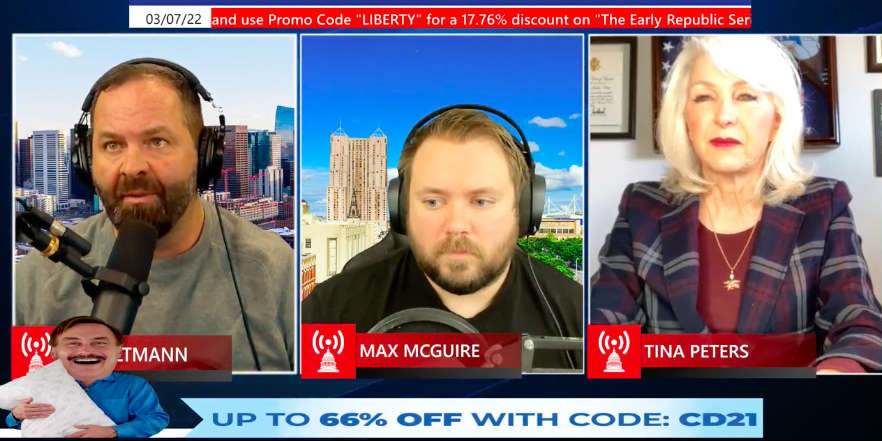 Mesa County Clerk and Recorder Tina Peters appeared on the Conservative Daily Podcast Monday to discuss the latest “Mesa County Forensic Examination and Analysis Report,” which she claimed provided evidence that the county’s Dominion Voting machines were unsecure and able to connect to the internet. The Grand Junction Daily Sentinel has reported that Mesa County officials have debunked the claims in the 146-page report.

“It is a blockbuster,” Peters told Conservative Daily host Joe Oltmann. “As you can see from Doug Gould’s bio and his credentials, he is way overqualified to do a report like this.”

Oltmann noted, “Doug Gould is a consultant for ASOG, and ASOG is retained by the Tina Peters Legal Defense Team.”

A representative from the Tina Peters Legal Defense Team confirmed that Oltmann’s statements were accurate, and said in an email, “Mr. Gould is a highly credentialed individual and an expert in the field of cyber security”

ASOG is the Allied Security Operations Group, founded by Russell Ramsland, a former Republican congressional candidate who has a history of promoting false voter fraud claims and is one of the primary promoters of the baseless election rumors in Antrim County, Michigan. Phil Waldron, a former military intelligence officer who circulated a PowerPoint presentation outlining how to overturn the 2020 presidential election on Jan. 6, was also an employee of ASOG.

While Gould does have a wide variety of cyber security credentials, he is not an expert in election software, and during a January 2021 appearance on The John Woodard Show, a podcast, Gould discussed a wide range of since-debunked conspiracies about the 2020 Presidential election.

“I actually have a copy of the affidavits that Sydney Powell has submitted for her Supreme Court case in Arizona,” said Gould in a video posted to YouTube on Jan. 7, 2021. “I did get a copy of those. Very interesting. Some of the details that have been made public talk about how some of the core software in our voting systems was written to create the potential for manipulation. When you hear that our voting systems were manipulated, there is an affidavit, which will — if the Supreme Court hears the case — go before the Supreme Court, of an individual who sat with Cesar Chavez in Venezuela. At the time that he specified, the operating rules for this vote manipulation software. The same individual testified under oath in a sworn affidavit that he was present during several elections where Chavez used this vote manipulation software in Venezuela to remain in power and later Nicholas Maduro took advantage of it when Maduro took over the country. There is a history of software having been corrupted and countries using that software not only to gain power but retain power.”

Powell’s lawsuits regarding the 2020 election have all been dismissed, and Powell is currently a defendant in a defamation case, alongside Oltmann, brought by former Dominion executive Eric Coomer. During her deposition, Powell admitted that she did not actually verify the accuracy of the claims submitted in her affidavits.

Gould went on to note, “The company that did this is called Smartmatic, and Smartmatic has written the core part of voting machines that are included in the Dominion Voting machine software.”

Dominion’s website states, “Dominion and Smartmatic are separate companies. Dominion does not use or license Smartmatic software.”

Gould went on to mention the Michigan forensic audit, which found no evidence of fraud. In the second part of Gould’s interview with Woodard, posted to YouTube on Jan. 12, 2021, Gould indulged in wild conspiracy theories about a potential civil war, antifa’s intelligence tradecraft, and the QAnon conspiracy that the Trump administration has thousands of sealed indictments ready to unleash against the deep state.

“Those of us on the conservative side tend to think that Donald Trump won this election by a landslide,” said Gould. “If that is correct — and I’m saying if — there are far more people who are conservative and believe the patriotic values that Trump and his agenda stand for than there are liberals who want to oppose it.

I would think an uprising in this country might result in a civil war, and then I have to ask, ‘Gee, which side is it that’s pro-gun and which side is anti-gun? On which side are you more likely to find more weapons and ammunition?’ and ‘Gee, doesn’t that kind of explain why Biden wants to put Beto O’Rourke in as the gun czar and seize all our weapons?’ What might happen is up in the air.”

To back up his claims about antifa’s intelligence skills, Gould shared an anecdote about a rumored action against a confederate statue. Despite receiving credible reports from “insiders” about the plan, Gould was unable to find any evidence of the antifa operation he could forward to law enforcement, which he said was evidence of their advanced intelligence tradecraft. During the Black Lives Matter protests of 2020, unfounded rumors about “busloads” of antifa members spread throughout right-wing media.

“Doug Gould is an independent forensic expert,” said Peters. “His credentials and credibility can stand alone.”