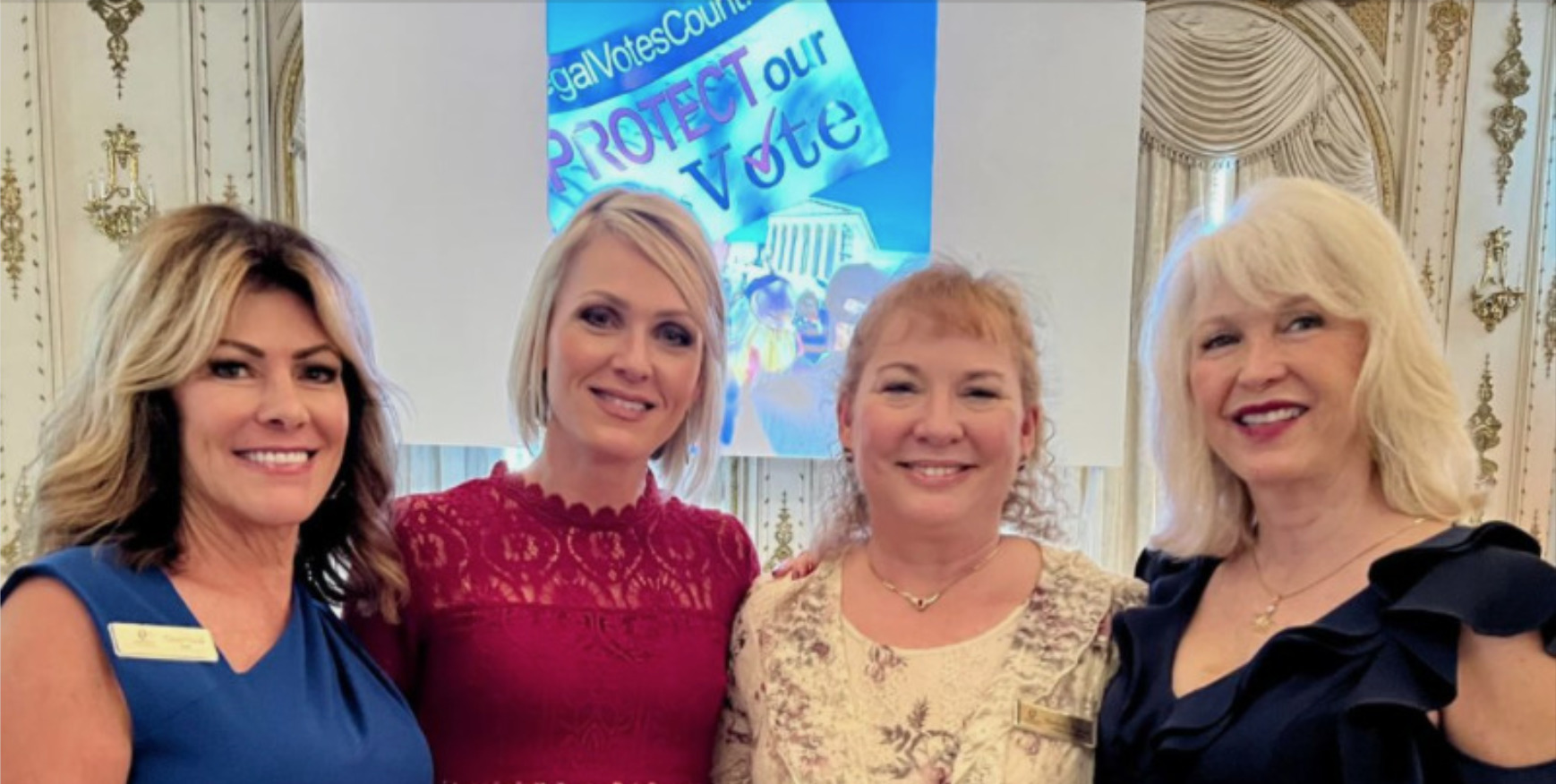 Colorado Gubernatorial hopeful Heidi Ganahl made headlines last month for sharing her belief at a Durango fundraiser that the 2020 election results may have been rigged.

In another exchange from that same fundraiser, Ganahl responded to a question about voter fraud by saying she’s bringing on a group of tens of thousands of moms who worked with newly-elected Virginia Gov. Glenn Youngkin’s campaign.

“Yeah, so I talked to Youngkin’s team about that, because they had an army out: 27,000 moms volunteered for his campaign!,” said Ganahl when asked about voter fraud. “They were election judges, poll watchers, they were making sure they were getting out the vote, they were doing door-knocking, it was a ground game like no other — that’s part of why I’m bringing their team on board — to help activate that.”

It’s not entirely clear which group of moms Ganahl means, but on its website the nation’s most prominent conservative mothers group, Moms for America (MFA), is publicly claiming credit for helping Youngkin win.

We are on a destiny shaping mission at Moms for America®! The sweeping change we saw in Virginia and across the country November 2nd is only the beginning, as Moms for America® mobilizes moms from coast to coast to reclaim our culture and restore the Republic!”

The group, which has both a nonpartisan 501c3 and an associated 501c4, Moms for America Action, also says its mobilization against the National School Board Association (NSBA), over a letter it sent to the Biden administration that likened parents’ angry public testimony to school board members to “domestic terrorism,” aided Youngkin.

Multiple news outlets cite conservative white moms and election fraud conspiracists as integral components of Youngkin’s win. Mothers for America isn’t the only active “mama bear” group, there’s also Moms for Liberty, which co-signed MFA’s letter to the NSBA and partnered with Fletcher’s group at its rally outside NSBA headquarters in Arlington, VA. MFA, however, which reportedly backed Youngkin and whose Virginia state leader recorded an ad for the Youngkin campaign, has proactively linked itself to Youngkin’s victory. Furthermore, MFA is a powerful voice for not only the mama bears, but for election fraud conspiracists.

The U.S. House’s Jan. 6 Select Committee recently subpoenaed MFA founder Kimberly Fletcher for her role in planning rallies for “election integrity” that led to the storming of the U.S. Capitol. In a video posted from her hotel room while the insurrection was taking place, Fletcher stated unequivocally that the election was stolen, while simultaneously criticizing and justifying the actions of the insurrectionists.

Fletcher’s Moms For America group organized these rallies on Jan. 5 and Jan. 6 intending, in the group’s own words, “to support the president and call for Congress, courts, and state legislatures to investigate the legitimacy of the election and not certify the electors until the truth is revealed.”

Fletcher routinely speaks on QAnon podcasts and at QAnon-linked conspiracy conferences. Last month in an appearance at Clay Clark’s ReAwaken America Conference in Texas, she took credit for Youngkin’s victory.

“The vast majority of conservative women of faith in this country aren’t voting,” said Fletcher. “What you saw in Virginia is what happens when we do. So ladies, you want to know what happened in Virginia? Moms got out and voted. That is our voice for our values. I need you to get registered, I need you to vote and we’re going to help you vote your values with confidence. And not only did we have a major impact in Virginia, we got the most awesome Lieutenant Governor coming in with Winsome Sears.”

Just last week Moms For America honored Sears and other “Moms of Influence” at their annual awards banquet at Mar-A-Lago.

Among the attendees were several Coloradans, including Tamra Farah, former Americans For Prosperity of Colorado Deputy Director who now works for Fletcher’s group, running its “MomForce” program training school board candidates.

Farah was joined at Mar-A-Lago by two other Colorado women, both of whom are election conspiracists: Mesa Clerk Tina Peters and Sherronna Bishop, the former campaign manager for Congresswoman Boebert who now works for Mike Lindell promoting election fraud around the country. Lindell, who spoke at MFA’s election Jan. 5 integrity rally in Washington D.C., also attended last week’s awards event at Mar-A-Lago.

Trump himself made an appearance at the Mar-A-Lago event, according to Bishop.

Farah posted a picture of her at the event with Fletcher, Bishop, and Peters. Between Fletcher’s subpoena and recent FBI searches of both Peters and Bishop’s homes, Farah is the only one pictured who isn’t under federal investigation.

The image on the screen behind them shows a website created by MFA Action, “LegalVotesCount.com,” which Fletcher’s group used to organize “Stop the Steal” rallies in numerous states. Fletcher spoke at the Nov. 7 rally in Nebraska, where in addition to pushing the Big Lie, she promoted classic antisemitic conspiracy theories, insisting that “those who are trying to destroy our country are being orchestrated by a bunch of international bankers and they are in a an effort to put us down and lift themselves up. It sounds crazy it sounds kooky but it’s real.”

Both Peters and Bishop have been working closely with a Colorado-based election fraud conspiracy group, the U.S. Election Integrity Plan, which also concentrates on recruiting conservative moms.

The dedication page of the group’s “County & Local Organizing Playbook” is signed by “The Super Moms of Colorado.”
It reads:

In April 2021, Dr. Douglas G. Frank came to Colorado and told us that Super Moms are going to save the world. Challenge accepted. This resource guide is dedicated to Dr. Frank, Mike Lindell, Professor David Clements, COL Phil Waldren, Col Shawn Smith, and all the incredible Patriots that are risking Lives, Fortunes and Sacred Honor in the name of truth. Thank you for inspiring us and leading the way. – The Super Moms of Colorado

Bishop used her substantial online reach via her America’s Mom social media platform to push the Big Lie and help USEIP build teams of canvassers all over Colorado to use publicly available voter data to create lists of addresses for conspiracist volunteers to knock doors in search of “phantom ballots.”

The group is convinced that unnamed criminals used mail-in ballots to cast fraudulent ballots in order to flip the election to President Biden.

Frank, whose debunked conspiracy theory about discovering an algorithm that controlled hacked voting machines, explained his nationwide efforts to build canvassing teams on an evangelical podcast earlier this year.

“That’s my job,” said Frank. “I work with the teams and get the data. We analyze it together and make a game plan and we form teams of ‘supermoms’ and we start canvassing voters. Once we find the phantom voters and it guides us where to look- we find the fraud and that builds a movement in the state.”

At the Durango fundraising event, Ganahl made it clear that she’s perpetuating some of the same conspiracies pushed by Bishop and USEIP, such as the claim that turning in a ballot for another person who might not be able to get to the polls in person, which is legal in Colorado, is somehow indicative of fraud.

“We’ve also got to keep people aware of how voter fraud happens, said Ganahl. We’re not going to get an audit on the machines because Jena Griswold has the contract right? But we can tell people about ballot harvesting! Don’t give your ballot to anybody else! Tell nursing home residents that: ‘don’t give your ballot to someone to turn in.’

Ganahl: That’s one of the the best practices. I don’t think it will happen in time for ’22, but if you’re looking long-term, yes that and photo ID at every step of the way.

The other thing that people don’t know is when you sign those voter- you know when you sign to register to vote  at the grocery store and stuff? So the activists that get your signature, those are put on a picture and you can CORA [Colorado Open Records Act] those. So bad actors can get you can CORA request pictures of all these  petitions or the signups. And guess what’s on there? I think your  driver’s license number is on there, your  signature’s on there. You don’t need anything to go online and change your voting information or your address so make sure everybody that you know checks their address online right before the election and signs up for the text alerts so that you know what’s happening.

And you guys- keep pushing hard! USIE- USEIP, I always mess up the acronym. There are a lot of great people working on this issue that would love to have you volunteer, get involved, and they are just doing great things. I’m happy to spread that contact information: it’s Emily Brake out of Boulder and that’s the best way you can get involved on that effort.”

Ganahl’s campaign did not return an email request for comment. This article will be updated with any response received.

Disputing Ganahl’s last assertion, Emily Brake offered the following statement: “I am absolutely not the contact for USEIP.  I am not and have never been a member of USEIP.  I do not condone violence in any way.”