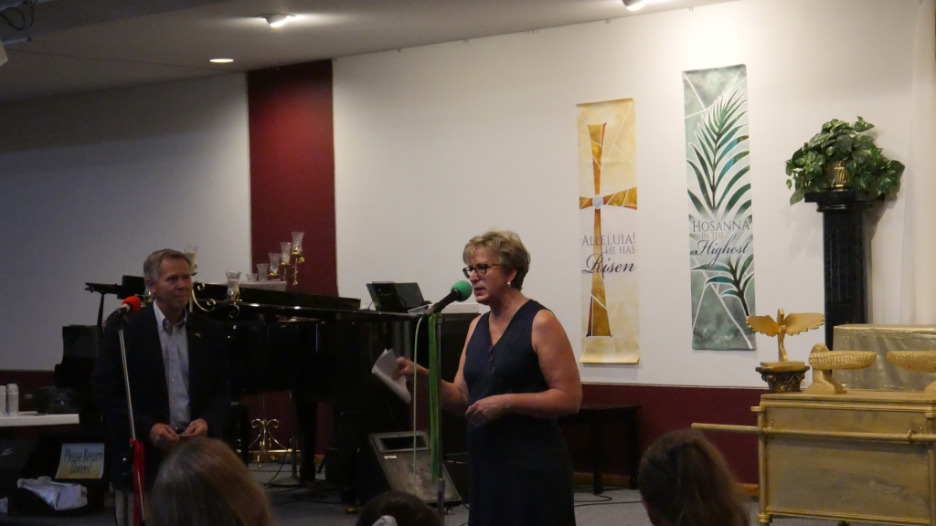 While all current amendments to our nation’s Constitution were proposed by a two-thirds majority of both chambers of the U.S. Congress and ratified by three-fourths of the states, a debate Tuesday night in Loveland, Colorado, covered the merits and drawbacks of another process entirely: a convention of states.

Hosted by conservative activist organization Keep Colorado Free & Open and the U.S. Election Integrity Project, an election fraud conspiracy group, the debate covered the pros and cons of amending the Constitution through a convention, which would take place if two-thirds of the country’s state legislatures voted in favor of convening it, as stipulated under Article V of the Constitution.

Lundberg, who supports calling an Article V convention, spoke on the power imbalance between Congress and the states.

“We the people need to take charge of our lives,” Lundberg said.

Southwell took the opposing position, speaking against a proposed Article V convention. She fears such a convention could spiral out of control and lead to the abandonment of the Constitution as a whole.

The last time a similar conference was called, delegates weren’t proposing amendments to the Constitution — they were amending the Articles of Confederation. That document was eventually thrown out and replaced by the current Constitution, which was drafted by delegates to that convention.

“I think there are very good reasons why it has not been applied before. There are inherent dangers in this,” Southwell said.

The debate was moderated by Nancy Eason from the Larimer County Republican Party. It was structured in a traditional manner with opening and closing statements by both sides, as well as a question and answer session involving the crowd.

Concerns from audience members included the impacts potential amendments could have on the Supreme Court, election integrity and vaccine requirements.

One amendment Lundberg hopes could come out at a convention of states is a provision keeping the U.S. Supreme Court to nine justices. Another is a federal balanced budget amendment, similar to Colorado’s TABOR. However, Southwell countered that federal spending could already be reined in through Article VI.

Southwell focused her points on holding lawmakers accountable for potential failings in their duties and educating citizens on their constitutional rights and responsibilities.

“Is the problem that there are errors that need fixing in the Constitution, or is it that we the citizens don’t even know the Constitution well enough to vote for good legislators?” Southwell asked.

Southwell drew comparisons between the current session of the U.S. Congress and the Chilean government under Salvador Allende. Southwell has received criticism in the past for her defense of Chilean dictator Augusto Pinochet.

Both debaters were skeptical of the results of the 2020 presidential election, with Lundberg referencing previous statements he had made surrounding Colorado Secretary of State Jena Griswold’s dismissal of third-party audits. Organizers of the event also discussed protesting vaccination and testing sites, and even bringing criminal charges against health departments that imposed lockdown restrictions.

The John Birch Society is vocally opposed to what it perceives as increases in socialist, communist, and anarchist sentiment in the United States, and is seen by the Southern Poverty Law Center and others as having a long history of taking fringe and extreme positions. Keep Colorado Free & Open, whose members in April expressed desires to revolt against the government “outside the law,” has a policy of only focusing on fighting for the Constitution and against strict public health restrictions, and Tuesday’s debate offered a good deal of rhetoric on both.

Katherine Stahla is an intern at the Colorado Times Recorder. She is a senior Journalism major with a minor in Environmental Studies at the University of Northern Colorado. You can contact her at [email protected]