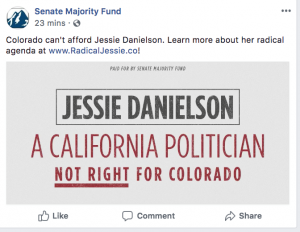 In fact, Danielson was born in Colorado and grew up near Ault in the northern part of the state. She currently resides in Wheat Ridge.

Jessie is the third generation of her family calling Wheat Ridge home. She grew up on her family’s farm near Ault. Her grandmother has resided in Wheat Ridge for nearly sixty years, and Jessie’s mother, aunt and two uncles are all proud graduates of Wheat Ridge High School.

A call to the Senate Majority Fund, which paid for the advertisement, was not returned, but presumably, the Republican organization wants to paint Danielson as an outsider somehow tainted by California.

For example, an outfit called State Solutions, which is connected to the Republican Governors’ Association, paid for a series of “RadiCalifornia” ads, trying to link Jared Polis, the Democratic candidate for governor, to alleged California craziness.

“Jared Polis wants to turn Colorado into RadiCalifornia,” states one of the ads, without mentioning that his Republican opponent, Walker Stapleton, was born in Connecticut. And a lot of Colorado residents weren’t born here.

Another conservative anti-Polis campaign, DecideColorado, spotlights an alleged threat from California and states that “conservative values are not a crime” and that voters should “make Colorado red again.”

Jenson did not return a call from the Colorado Times Recorder.

Jenson has passed up the opportunity to comment on other topics, including where she stands on President Donald Trump.