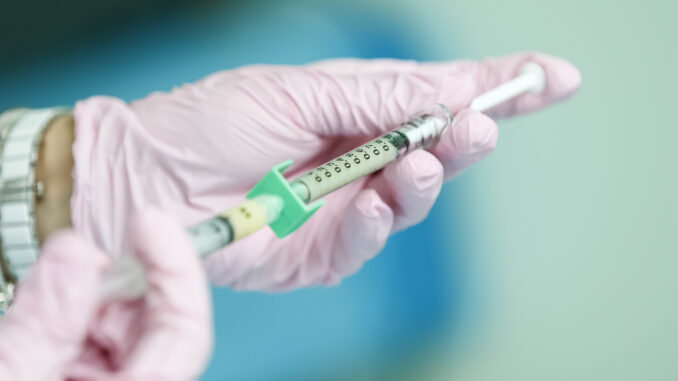 Editor’s Note: During the pandemic, the Colorado Times Recorder will occasionally post articles from UCHealth Today, which is published by UCHeatlh, the hospital associated with the University of Colorado School of Medicine. Our goal is to provide as many people as possible with accurate information about the virus and related topics.

One of the first volunteers for COVID-19 clinical trials in Colorado now knows he also was one of the first people in the state to receive the real vaccine.

Rouse stepped up in August to participate in the Moderna COVID-19 clinical trials at UCHealth University of Colorado Hospital. He knew that it was important for the vaccines to be tested on African Americans, so he volunteered.

And, during a follow-up visit this month, he learned that he had received the real vaccine, not a placebo.

“Congratulations, Mr. Rouse. You got the vaccine. We thank you very much for participating,” said Rebecca Pitotti, a nurse practitioner and one of the sub-investigators on the Moderna trial at University of Colorado Hospital on the Anschutz medical campus.

Because clinical trials have shown that the Moderna and Pfizer vaccines are safe and remarkably effective — preventing COVID-infections about 95% of the time — the vaccine makers obtained permission to tell thousands of study participants whether they had randomly received the real vaccine or a placebo. And, those who got the placebo are getting their vaccines now.

Rouse’s big reveal was called an “unblinding.” That’s because the highest quality clinical trials are known as “double blind.” That means that neither the study participants nor the lead researchers know which volunteers have received the actual medication vs. those who have received a placebo.

A gut feeling and great health too

Rouse wasn’t surprised at all when Pitotti told him about his status. He always had the gut feeling that he had received the real vaccine.

“I think we knew from day 1 that I had it,” Rouse said. “I had fatigue, body and muscle aches, diarrhea and nausea.”

Rouse said all of his symptoms were gone within 12 hours after his first vaccine dose and within 24 hours after he received his second booster dose 28 days later.

“The vaccine is definitely better than getting COVID-19,” Rouse said. “The side-effects were all short-term.”

Rouse was confident that his body was responding well after he received his vaccines. He hasn’t been sick since he got his vaccines.

Despite having a strong hunch, Rouse said it was great to get news that he’s fully vaccinated.

“I’m relieved that it’s been confirmed,” he said.

Still, he continues to take precautions and wear a mask. Medical experts are calling on everyone to keep up with prevention measures until millions more people can get their vaccines.

‘Science is the solution’

When Rouse volunteered for the vaccine study, he knew there was no guarantee that he would get the real vaccine or that it would work so well.

But, he’s proud that he stepped up to help researchers. In particular, African Americans have hesitated to participate in medical research after scientists’ past abuses of them. Black patients also face discrimination now in health care systems.

“I felt I had a social responsibility to get involved and to step up. African Americans have not been treated well. Yes, there are some reasons to be fearful. At the same time, we can’t let the past define the future,” Rouse said.

Because of these terrible trends, Rouse is urging all people of color to get their vaccines as soon as possible.

“If you let the past define the future, you’re going to be dead from this virus,” Rouse said.

He’s pleased that the vaccines are working so well, and Rouse will keep participating in the Moderna clinical trial at University of Colorado Hospital. Researchers will continue to study Rouse and other trial volunteers for two years to determine if participants have any long-term effects from the vaccines. They’re also eager to study how long vaccine-generated antibodies last.

He’s pleased that other people of color joined him in the vaccine study. And, Rouse will keep preaching a message of truth to those who are afraid of research and vaccines.

“I told my family: throughout history, if it were not for people volunteering to do something like this, we wouldn’t have the medications we have now,” Rouse said. “Science is the solution – not fear.”