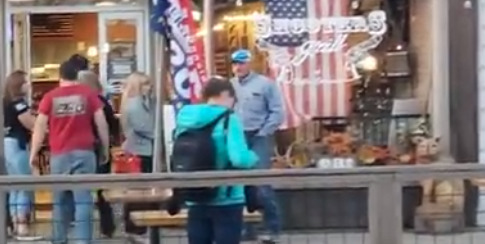 State Sen. Kerry Donovan, a Democrat, tweeted a photo today showing U.S. Sen. Cory Gardner (R-CO) and congressional candidate Lauren Boebert, both maskless and in violation of a Garfield County, Colorado, requirement that “facial coverings” be worn “in all settings, both indoor and outdoor.”

Additional photos, sent to the Colorado Times Recorder by Rifle resident Kyra Schofield, show Gardner and Boebert, both maskless, in close proximity with others, including one apparent child, at the Freedom Rally today in front of Shooters Grill, Boebert’s restaurant in Rifle, which is located in Garfield County.

A video of the event (below), also taken by Schofield, shows what appears to be a Shooters Grill staff member, with a trademark gun at her hip, letting maskless patrons into the restaurant, also in apparent violation of the mask mandate.

In the video, Gardner is standing outside the restaurant, also maskless, as the people enter Shooters Grill.

Boebert gained wide media attention this spring when she defied Colorado’s order to close her rifle restaurant to fight the spread of COVID. She eventually closed the establishment temporarily as ordered, amid much media attention.

Later, her campaign was cited by Pitkin County health officials for violating health orders at an Aspen fundraiser.

Those incidents of flouting health orders, coupled with her own stance that mask-wearing should be a personal decision, led one pubic health expert to say that Boebert’s campaign was “stoking mistrust” of “heroes” who work in public health.

Gardner is inconsistent with his mask-wearing habits, normally wearing masks for official photos on Facebook but often seen maskless in informal images that appear on social media.

Neither Gardner nor Boebert could be reached for comment.

UPDATED Nov. 3 with photo and video credits given to Kyra Schofield.