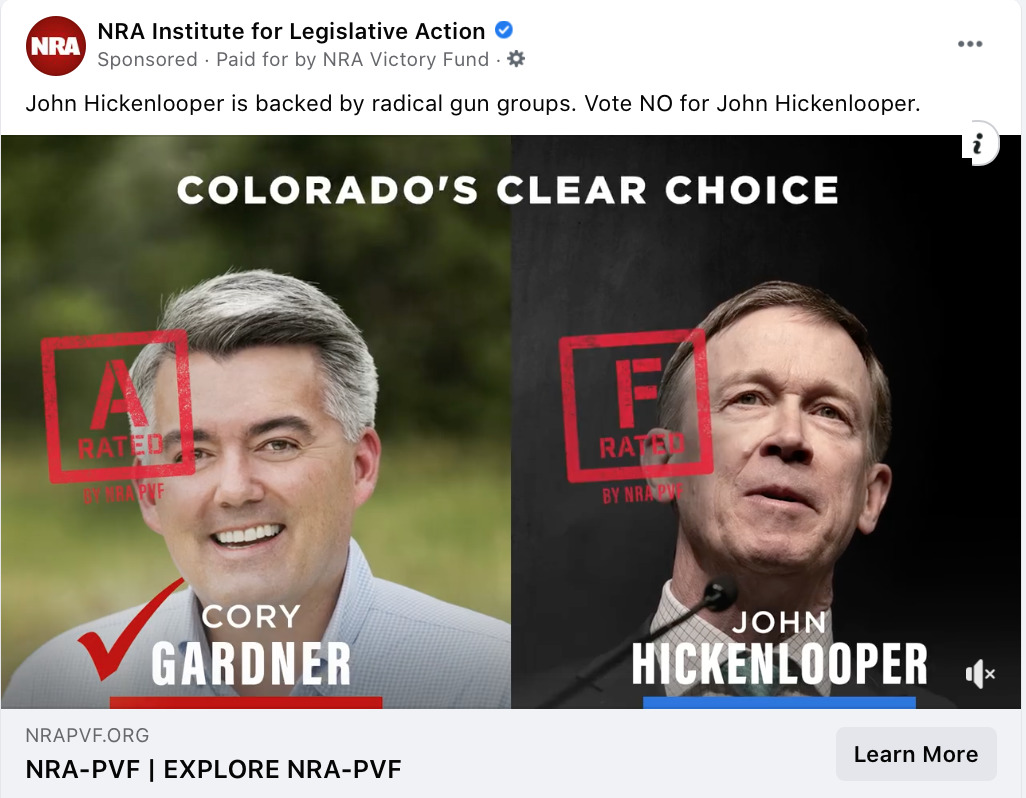 Since the beginning of September, the National Rifle Association (NRA) spent approximately $10,000 weekly on Facebook ads in support of U.S. Sen. Cory Gardner. The ads have been viewed around three million times.

The NRA spent between $38,000 and $50,274 on Facebook ads in September, generating between 2.29 million and 2.71 million cumulative impressions (the times an ad was displayed on a Facebook feed) over the month.

In the first week of October the NRA spent between $7,000 and $8,691 on Gardner-focused ads that were seen between 503,000 and 597,000 times. Facebook only gives ranges for funding amounts and impressions values on its ad library.

Over his career Gardner has received the fifth-highest amount of funding from the NRA among active U.S. senators and was endorsed with an ‘A’ rating from NRA’s Political Victory Fund.

The NRA is not the only gun rights group supporting Gardner. He currently has a 100% rating from Gun Owners of America, a far-right group which endorsed Gardner in 2014. The group, whose former executive director is a noted conspiracy theorist, just recently endorsed congressional candidate Lauren Boebert. Also, despite Gardner’s pro-gun voting record, he has avoided directly answering questions about gun-control policies.

The ads mostly attack Hickenlooper, both in the videos themselves or the captions provided with the ads.

“Your RIGHT to self-defense is on the ballot. Defend your rights. Defeat John Hickenlooper and the radical anti-gun lobby,” another read.

“The choice is clear in Colorado. Defend your rights, defeat John Hickenlooper,” a different ad read.

Meanwhile, gun-violence prevention groups have held Gardner accountable for his pro-gun record. Gardner has a 0% rating from the Brady Campaign to Prevent Gun-Violence.

The Blue Rising PAC, dedicated to fighting the Trump administration and the extreme Right, bought a billboard last year in South Denver which asked Gardner to “Protect kids, not guns,” and highlighted the $3.8 million he’s received from the NRA over his career.

Additionally, the Giffords PAC, a gun-violence prevention group founded by former Congresswoman Gabrielle Giffords, announced it was funding a TV commercial campaign ripping Gardner for his opposition to total background checks and his support of President Donald Trump.