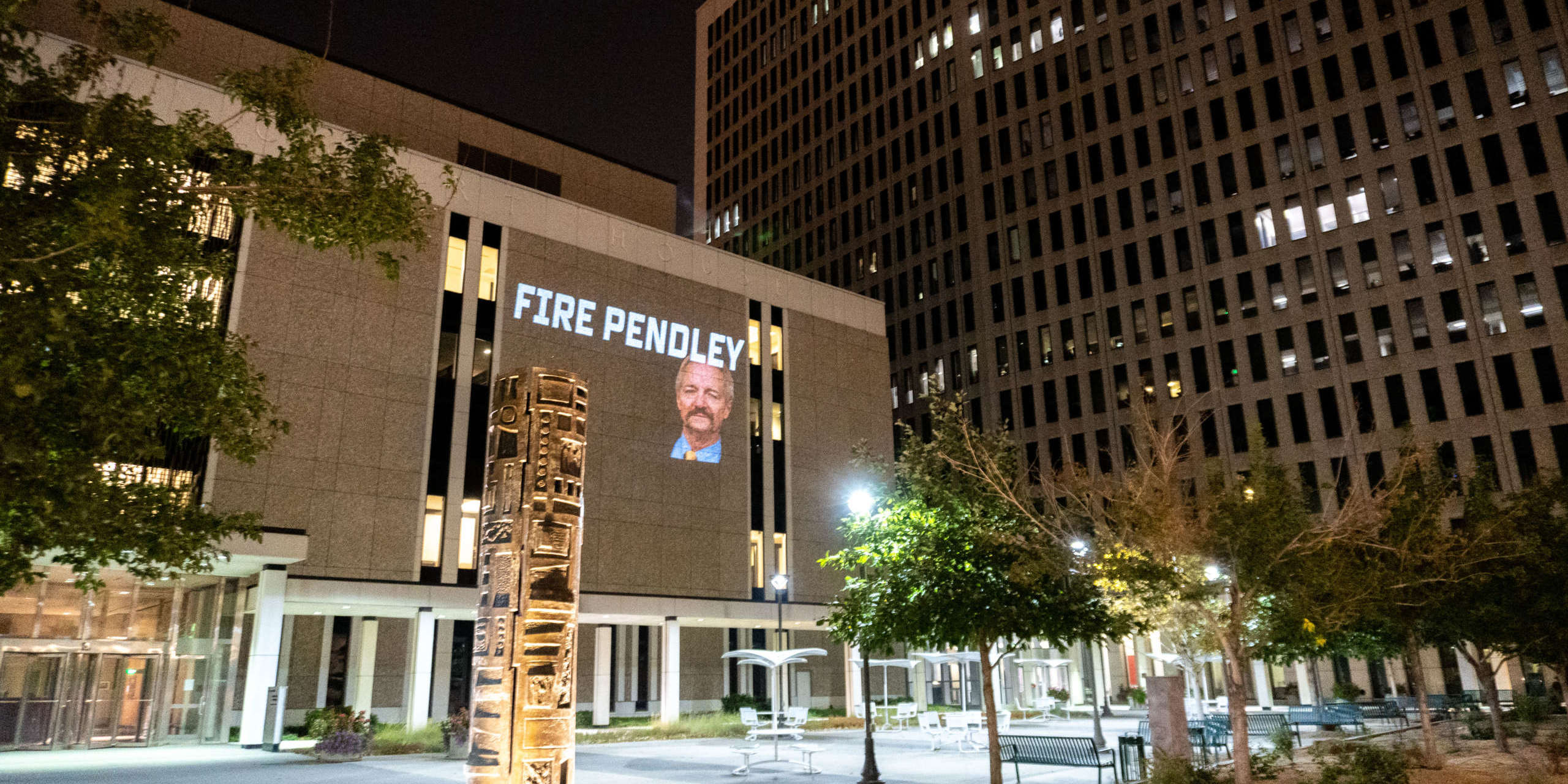 In a protest calling for the complete removal of William Perry Pendley from any position at the Bureau of Land Management (BLM), Progress Now Colorado, a progressive advocacy organization, used a powerful projector to beam the phrase “FIRE PENDLEY” on the building housing the office of U.S. Sen. Cory Gardner (R-CO).

Gardner has avoided directly saying if he supports Pendley, whose nomination to lead the federal lands-management agency incited the ire of Democrats and environmental groups because of his past positions on environmental issues.

Last year, after he was nominated to take over the BLM by President Donald Trump, Pendley refused to say why he does not believe in global warming. Pendley also did not retract statements he made referring to the “fiction of man-made climate change” and calling climate believers “kooks.” In June Pendley wrote an op-ed criticizing the Black Lives Matter movement and saying it was based on a “terrible lie.”

Progress Now Colorado condemned Pendley in a statement and called on Gardner to advocate for Pendley’s removal from the BLM.

“For nearly 30 years William Perry Pendley, a former oil industry attorney, was president of the Mountain States Legal Foundation (MSLF), where he regularly sued federal agencies to challenge conservation policies and regulations managed by the very agency he now leads,” the statement read. “As recently as 2016, Pendley argued that the Constitution ‘requires’ the federal government to sell the lands it owns in the West.”

On Sept. 25, 2020, a federal judge ruled that Pendley had been leading the BLM unlawfully since he was nominated by Trump. Pendley was removed from his office because he was never confirmed by the U.S. Senate. House Democrats have been investigating Pendley for months.

Trump withdrew Pendley’s nomination to head the BLM in August, but he was able to remain in control of the agency because of a loophole Pendley himself created while acting as director.

Secretary of the Interior David Bernhardt said the department will appeal the decision on an appearance with Ross Kaminsky’s KHOIW radio show in Denver on Friday.

However, if the decision holds then the decisions Pendley made while interim director could be rolled back.

“This judge said… Perry can’t exercise this authority because he’s not confirmed by the Senate, and it runs afoul of what’s called the Vacancy Act. I think that’s completely wrong,” Bernhardt said. “But in the meantime, Perry is back doing his very important job, which is the Deputy Director of the BLM, which almost does the same job anyways… But the bottom line is folks have tried from the very beginning to slow down this administration in a whole host of ways. And at the end of the day, they’re just going to keep failing and we’re going to keep delivering results for the American people over and over and over.”

The Fire-Pendley projection shone on Gardner’s office for about fifteen minutes before a security guard told Progress Now Colorado they had to turn their projector off.

“Unfortunately, while the judge’s order bars Pendley from any further actions as BLM’s director, he is still in a leadership role,” Progress Now Colorado’s statement concluded. “Pendley remains deputy director of policy and programs, with continuing authority over BLM policies. ProgressNow Colorado is calling for Pendley’s complete removal from any position at the Bureau of Land Management.”