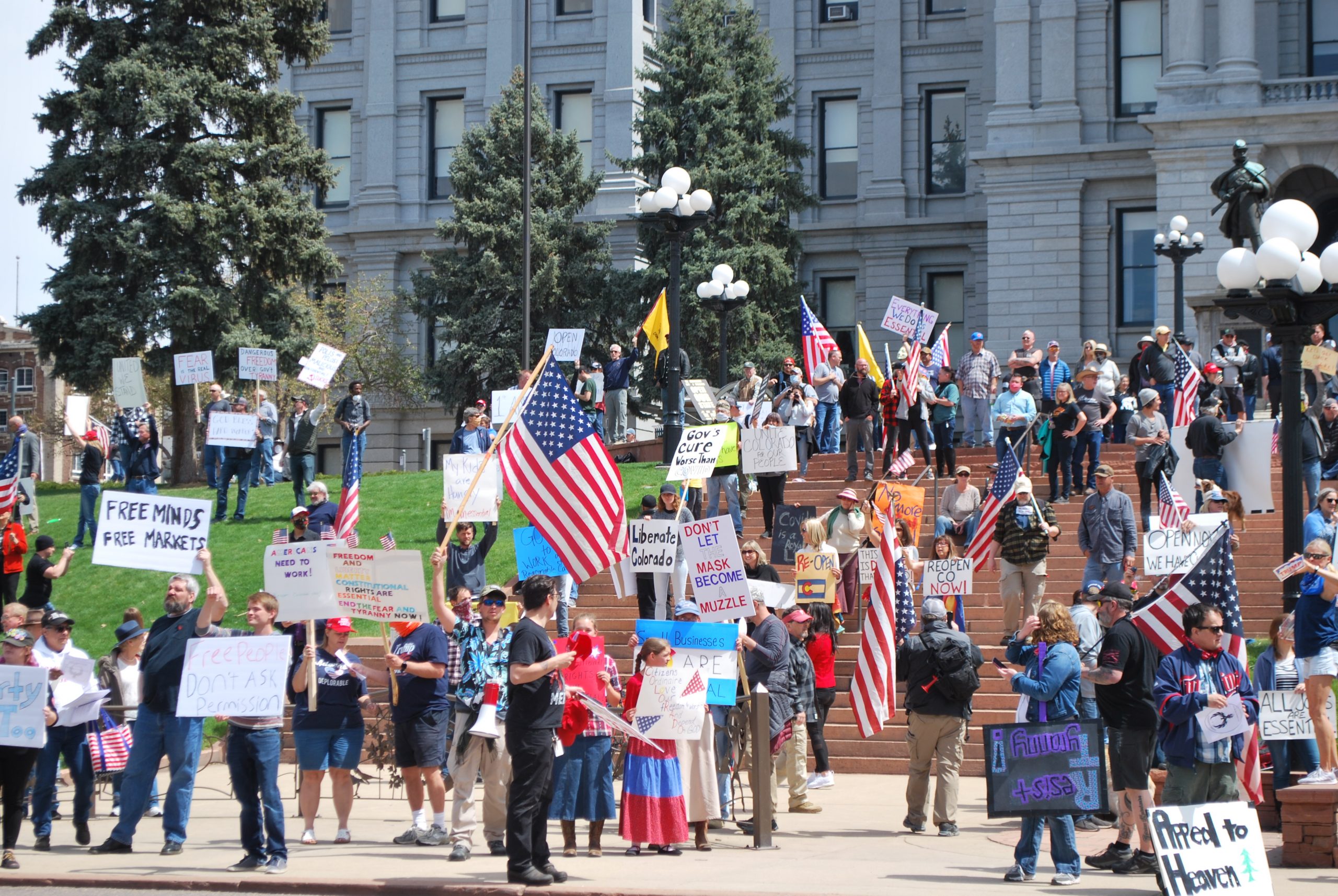 Twenty-four state lawmakers sent a letter to Colorado Gov. Jared Polis (D-CO) yesterday, calling for a county-by-county approach to re-opening the state and alleging that protesters practicing safe social distancing over the weekend proved that the state can re-open safely.

“If Coloradans can protest safely, please rest assured we can return to work safely,” stated the letter.

But a review of multiple photographs from Sunday’s re-open Colorado rally in front of the Capitol showed that participants failed miserably at social distancing.

“Over this weekend, thousands of Coloradans took to the
streets to protest the economic shutdown,” stated the letter. “Some of these protests involved ‘cruising North Ave.’ in Grand Junction; others rallied on the steps of the Capitol. Protesters found clever ways to socially distance and protest the closing of nonessential businesses.”

The 24 state representatives, including House Republican leader Patrick Neville of Castle Rock, argued in their letter that “Coloradans are done with mass quarantining” and that the statewide stay-at-home order should be replaced by a “county model.”

Polis announced Monday that Colorado would begin a phased removal of some restrictions April 27, not in response to Republican demands, but because state health officials believe a partial easing, described as a move from “stay at home” to “stay safer at home,” is acceptable from a public health perspective. Restaurants and bars might be able to re-open in some capacity in mid-May, Polis said.

Many Republican leaders have been attacking Polis’ orders from the get-go.

Neville aggressively attacked his own local public health entity, Tri-County Health, which issued its own first shelter-in-place directive, a day before the statewide order. Neville called the order “completely insane,” and called on Douglas County to terminate its contract with Tri-County Health because of the order.

The following day, Senate Republicans denounced Polis’ stay-at-home order, stating in a letter signed by 14 of 16 state senators, “Despite many of our constituents’ expressed concerns over the last two weeks, we have resisted publicly critiquing you, your office, and your efforts, but we must formally express to you our disappointment in your ‘Stay-at-Home’ order issued on Wednesday afternoon.”

Yesterday’s letter concluded, “The House Republicans look forward to re-opening Colorado for business on a county-by-county basis starting on April 26th. Colorado has been a leader in innovative solutions to complex problems and we look forward to working with you to get Coloradans back to work. We share the common goal of a successful populace with families living the Colorado Way. It is time to make that a reality again!”

“Our health care workers put their lives on the line to fight this pandemic, and now they’re facing irresponsible protests egged on by our very own president and Republican state leaders,” Colorado Democratic Party Chair Morgan Carroll said in a statement Tuesday.