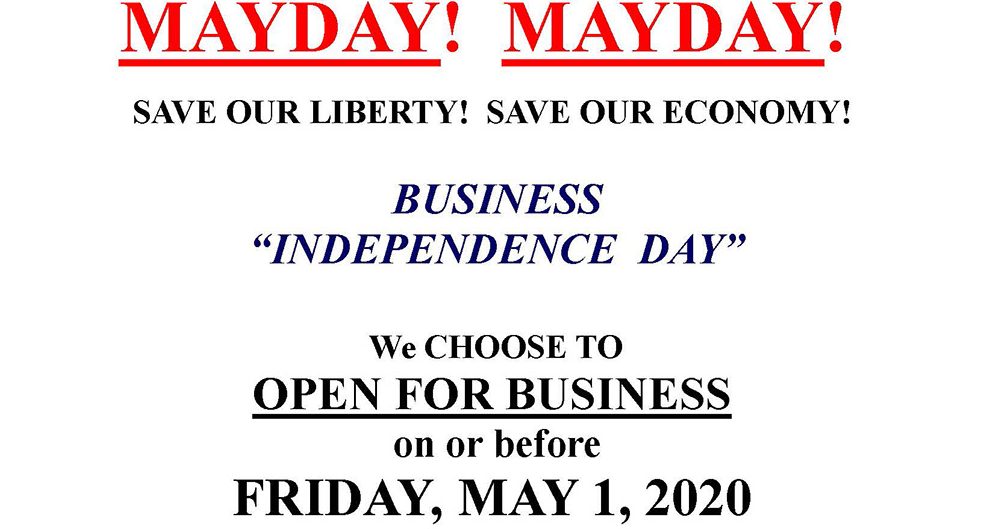 A conservative talk radio host and former spokeswoman for a failed effort to recall Gov. Jared Polis (D-CO) is helping spread the word about MayDay-Colorado.com, which is encouraging Colorado businesses to open May 1, whether or not they have government authorization to do so.

Karen Kataline appeared this morning on conservative 710-AM radio to urge listeners to promote MayDay-Colorado and watch for the initiative’s banner at a drive-by “gridlock” rally in downtown from 1 p.m. to 4 p.m. Sunday, April 19.

“Guess what? We are opening for business on May Day, the old socialist holiday,” said Kataline on air. “We are taking it back, and we don’t need the governor’s permission. We are on solid constitutional ground.”

There’s no evidence that Polis’ order to shut down non-essential businesses to protect public health faces any serious constitutional challenge.

A MayDay-Colorado flyer available for download states: “Business Independence Day” and “MAYDAY! MAYDAY! Save our Liberty. Save our Economy.”

Kataline said people should drive by the “gridlock” protest tomorrow and view the banner.

Kataline, who substitutes for regular hosts on talk radio stations in the metro area, said last month that the response to the virus has been marked by hysteria.

Polis has said that if the virus were to run rampant, it would do more damage to the economy than the efforts to try to fight it, as Colorado is doing.

Polis addressed the economic cost of the health crisis in a news conference Friday.

“We have to address the public health issue,” said Polis recently, “…because if we fail, the economic consequences of the virus running rampant will be far worse in the medium and long term. This will be difficult, but this will also be temporary.”

Reached by phone, Kataline said she is not a spokeswoman for the group. She called the radio show to get the word out, she said.

Greg Lopez, a former mayor of Parker who’s already announced his candidacy to oppose Polis in the next gubernatorial election, came up with the idea to push back with small businesses and open May 1 regardless of state directives, said Kataline. She also said social distancing would be respected.

Lopez did not immediately return a call for comment.

9News reported that Lundberg “acknowledged that Colorado Freedom Force did not consult public health experts about the impact of lifting the stay-home order now.”

“I’ve come to the conclusion that public health doesn’t have all the answers,” Lundberg told 9News.