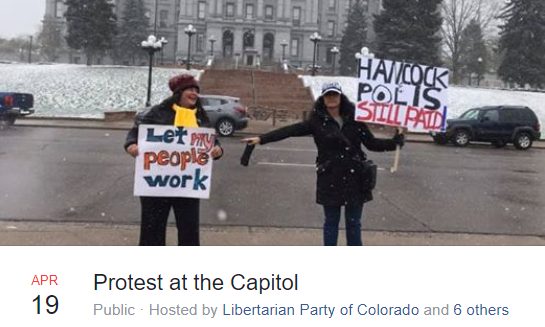 Colorado Citizen Press, an anonymous conservative blog whose sponsors include Take Back Colorado, a political committee tied to Republican State House Leader Patrick Neville, published an item this morning that promotes two protests on Sunday calling on Gov. Jared Polis (D-CO) to allow businesses to open, despite the ongoing threat of COVID-19.

Yesterday, Colorado Citizen Press emailed a “special message from our sponsor,” which turned out to be Take Back Colorado, stating, “If you agree that Polis has done enough damage to Colorado’s economy… please chip in to help us elect conservatives who will support economic and personal freedom.“

The Take Back Colorado email linked to a donation page featuring a “POLIS POLICE STATE SURVEY” that asked, “Do you think it’s time for Polis to lift his lockdown order and let Coloradans get back to work?”

Take Back Colorado is run by Rearden Strategic, widely known to be run by Patrick Neville’s brother Joe Neville.

Efforts to find out if Patrick Neville plans to attend the protest–and for comment on this article– were not successful.

A Facebook page for one of Sunday’s protests, called Operation Gridlock Denver and set for 1 p.m. at the Capitol, shows 323 people going and 1,400 as interested. It’s hosted by the Libertarian Party of El Paso County, Victoria Reynolds 2020, and Peace, Love, and Hippie Juice.

The second event starts at 2 p.m at the same location and is hosted by the Libertarian Party of Colorado. A Facebook page for this event shows 72 people going, 268 interested.

“If you believe enough is enough, go to the Colorado State Capitol on Sunday and make your voice heard,” states Colorado Citizen Press. “If you are done sitting quietly while tyrants across Colorado assume control of your life, go stand in solidarity with your fellow citizens at the State Capitol.”

Polis has said the health of the economy depends on fighting the virus.

“If we fail, the economic consequences of the virus running rampant will be far worse in the medium and long term. This will be difficult, but this will also be temporary,” Polis has said.

Over 350 people have died in Colorado due to COVID-19 and over 1,600 have been hospitalized.

Polis has issued a stay-at-home order through April 26 to contain the illness and avoid overwhelming Colorado’s hospitals with victims of the virus.

Another sponsor of Colorado Citizen Press is the Chuck and Julie podcast, with hosts Julie Hayden and Chuck Bonniwell, who was fired from KNUS 710-AM after joking that he wished for a “nice school shooting” as a distraction from the impeachment hearings.