A Colorado lawmaker either doesn’t read the things he shares on Facebook, or he assumes his readers won’t 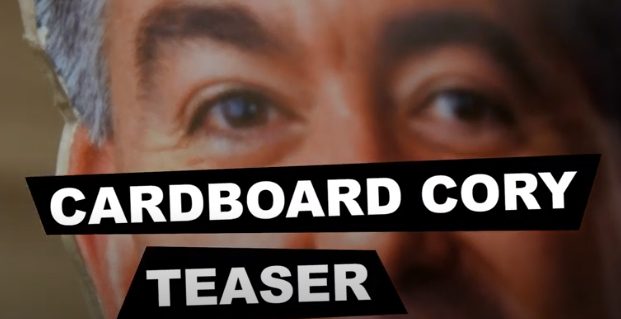 One of the many surprisingly effective qualities of the cardboard cutout of U.S. Senator Cory Gardner (R-CO), which was built to highlight the senator’s decision not to hold town-hall meetings for years, is how photogenic it is, especially when it interacts with real humans.

When people see the smiling cardboard cutout, at an event or on the street, they’re drawn to it, to take selfies, make comments, stick out their tongues, laugh, yell.

“I’ve made so many phone calls to you, Cory. Where have you been?”

“Why did you take so much money from the NRA?”

“Do you even like Colorado? We haven’t seen you in a really long time.”

So it’s a brilliant plan of anti-Gardner activists to create a series of online videos, and a short documentary, starring…Cardboard Cory.

The purpose of the videos, says Indivisible Front Range Resistance organizer Katie Farnan, is to build a volunteer base for phone banking, texting, or whatever can be done activist-wise in the new COVID-19 campaign world.

So Farnan and filmmaker Nick Rosen are turning Cardboard Cory into a recruiter.

“People see Cardboard Cory and want to be part of this awesome thing we created,” said Farnan. “They want to join us. Cardboard Cory makes it okay to get involved.”

To give us a taste of what’s to come, Indivisible has released a teaser titled, of course, “Cardboard Cory.”

It opens with MSNBC host Rachel Maddow saying Gardner’s “constituents have not seen much of him,” noting that at the time the senator hadn’t held a town hall meeting in “486 days, seven hours, ane 20 minutes, not that they are counting or anything.”

The teaser then cuts to irresistible local TV news footage of the cardboard cut-out itself: “They want to get their voice heard, since he’s not coming out and speaking with them,” says a TV reporter.

The big-headed cutout is seen leaning against trees, under people’s arms, in an airport, on the street, standing silently as folks talk to him.

Then, of course, Trump appears in the video, saying Gardner has “been so great.” Trump is widely seen as a liability to Gardner.

Just before the video concludes, urging people to get involved by texting BYECORY to 97779, the cutout is seen blowing over on an empty highway.

The idea is to mix interviews with survivors, activists, everyday people, and grassroots organizers, with archival videos of Cardboard Cory,

There’s plenty of Cardboard Cory video on the shelf, says Farnam, starting from the cutout’s 2017 debuted at a packed Denver middle school to its 2019 promotional bus tour across the entire state of Colorado.

Through it all, Cardboard Cory has emerged as a folk hero among Gardner opponents and supporters alike, a rare achievement for a grassroots figure, much less one made of a wood product.

The Cardboard Cory video and documentary project is paid for by the Payback Project, which is Indivisible’s national campaign focused on 11 vulnerable senators.

Payback will use the Cardboard Cory videos nationally to help recruit and inspire activists to focus on the senate.

“We need to take control of the Senate,” says Farnan. “That’s why we are doing this. The Senate has abdicated its responsibility in terms of checks and balances. Cory Gardner is at the center of that.”