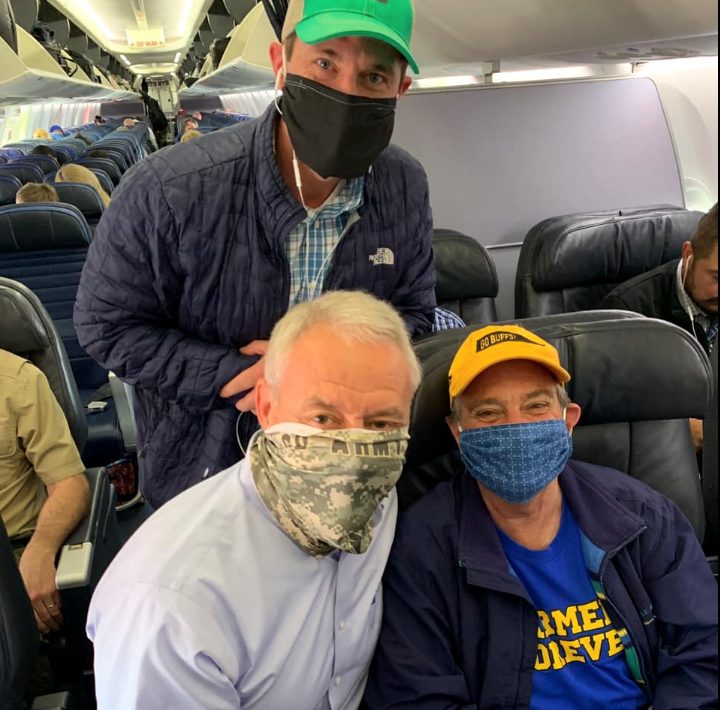 When you’ve been writing coronavirus stories and almost nothing else for a month (and seeing your wife, mother, and almost no one else), you naturally wonder if you’re hallucinating when you see an April 21 Facebook photo of fully-masked Congressman Ken Buck (R-CO) on an airplane–after you were sure he said the week before that he had no plans to wear a mask on an airplane trip to Washington D.C.

But there’s Buck, in an airplane, showing off his mask with fellow Colorado Congressmen Jason Crow and Ed Perlmutter, both Democrats.

“Staying safe with some familiar faces on the flight to DC.,” Buck wrote on his Facebook page along with the photo. “We’ll be debating and voting on the next phase of federal funding in the fight against COVID-19 this week.”

Did Buck’s view of the science behind the mask-wearing change? Did he feel peer pressure from his Democratic Colleagues? That’s not known because Buck didn’t return my call.

But we know that the week before he posted this photo of himself and the other Congressmen, Buck boasted to conservatives that no mask would cover his face on an upcoming airplane trip to Washington.

“I’ll be getting on a plane on Monday and heading back to DC, I have no plans on wearing a mask,” he said April 11 in response to KNUS radio host Randy Corporon’s question, “Do you ever wear a mask when you are out in public?” (Listen below.)

Buck, whom some began calling His Masklessness, did not return my calls a couple weeks ago asking for a science-based justification for not wearing a mask during an airline trip.

There’s some debate about the danger of improperly worn or handled masks, and leading scientists question the utility of masks in areas that are not crowded.

But not wearing a mask on an airplane?

I was hoping Buck, whose actions and comments on COVID-19 have raised eyebrows previously, would return my call today, because he might have an approach to protection from COVID-19 that’s masked by his conflicting statements and actions about masks–which I’ve not been able to figure out from his public statements.

He’s not against all mask-wearing, judging from the fact that he told Corporon that he wore a mask when he collected items from people for a food drive.

And he’s said masks might be part of what’s needed as Americans go back to work.

So Buck is clearly less mask-hating than his initial statement about not wearing a mask on an airplane trip would lead you to believe.

And the photo from the plane confirms this.

Buck would do us all a favor by explaining himself.

Here’s Buck saying April 11 that he has no plans to wear a mask on an airplane:

Home › Forums › After Saying He Wouldn’t Wear a Mask, Ken Buck Posts Photo of Himself Wearing One with Fellow Congressmen