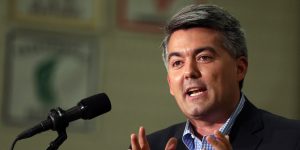 That’s the opposite reaction Gardner had when Obama selected federal appeals court Justice Merrick Garland in 2016 to fill a Supreme Court seat that opened after the death of Justice Antonin Scalia.

Gardner’s refusal to talk to Garland earned him a rebuke from Obama himself. The Colorado Springs Gazette reported at the time:

“Sen. Gardner has not been doing his job as a senator,” Obama told The Gazette in a short interview after the Air Force Academy graduation. “He is perfectly free after having met with Judge Garland to conclude that ‘this is not somebody that I am going to vote for…’ ”

“Everybody agrees that he is perhaps the most qualified candidate for a Supreme Court seat ever,” Obama said. “Here is a guy who has been a U.S. prosecutor and taken on some of the highest-profile terrorism cases in our history. He’s actually been a judge longer than Chief Justice (John) Roberts, who he groomed before Chief Justice Roberts went up to the Supreme Court.”

Gardner never met with Garland, whose nomination died when Obama’s term ended in 2016.

Gardner explained in 2016 that he wouldn’t meet with Garland because “our next election is too soon and the stakes are too high; the American people deserve a role in the process as the next Supreme Court justice will influence the direction of this country for years to come.”

Gardner’s office did not return a call for comment about his apparent double-standard of seeking a meeting with Kavanaugh with an election about four months away–when he refused to meet with Garland.

Kavanaugh’s critics are saying that another Trump conservative on the U.S. Supreme Court could lead to the gutting of Roe v. Wade, the law that guarantees women the right to have an legal abortion.