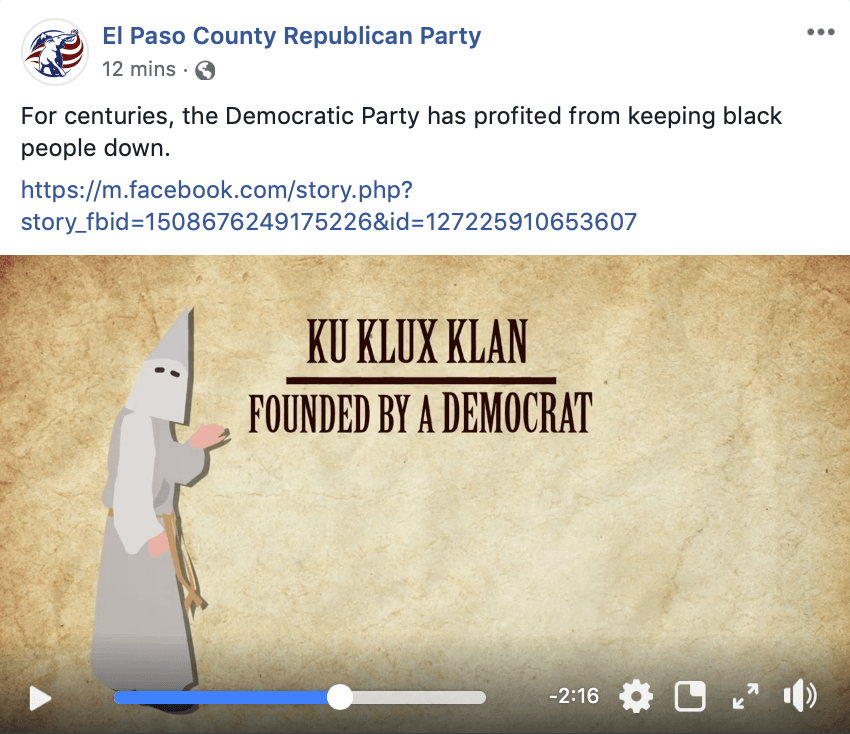 A recurrent attack from some Colorado Republicans is that Democrats promote social welfare programs not to help low-income people, but to keep them in poverty and beholden to Democratic politicians.

“For Centuries, the Democratic Party has profited from keeping black people down,” stated the El Paso County Republicans, linking to an a video arguing, among other things, that “massive government welfare has decimated the black family, opposition to school choice has kept them trapped in failing schools, and politically-correct policing has left black neighborhoods defenseless against violent crime.”

The video was produced by Prager U, a non-profit entity (not a university), described as “an online resource” and founded and directed by author and conservative talk radio host, Dennis Prager, who is heard locally on KNUS 710-AM, a conservative radio station near Denver.

The video states that civil rights legislation was designed to deliver the votes of African Americans to Democrats.

A couple years ago, the Chaffee County, Colorado, Republican Party, commented on another Prager U. video, and argued that Democrats have been keeping African Americans on the “plantation” for years, essentially comparing Democrats to slave owners.

“It’s very sad the way Democrats have treated black people by keeping them economically disadvantaged, by keeping them uneducated and breaking down their families,” stated Chafee County Republicans on Facebook at the time. “The Democratic programs for blacks have primarily been a ruse to transfer wealth to handlers like Jessie Jackson, Al Sharpton, Maxine Waters and Corrine Brown, who keep the false rhetoric of hope and change going to their black pawns while lining their own pockets. It has worked well as the Democratic (Socialist) party has been playing this game for years and has been able to count on the black vote for a few crumbs of bread-with Trump black people will really get ‘hope & change.'”