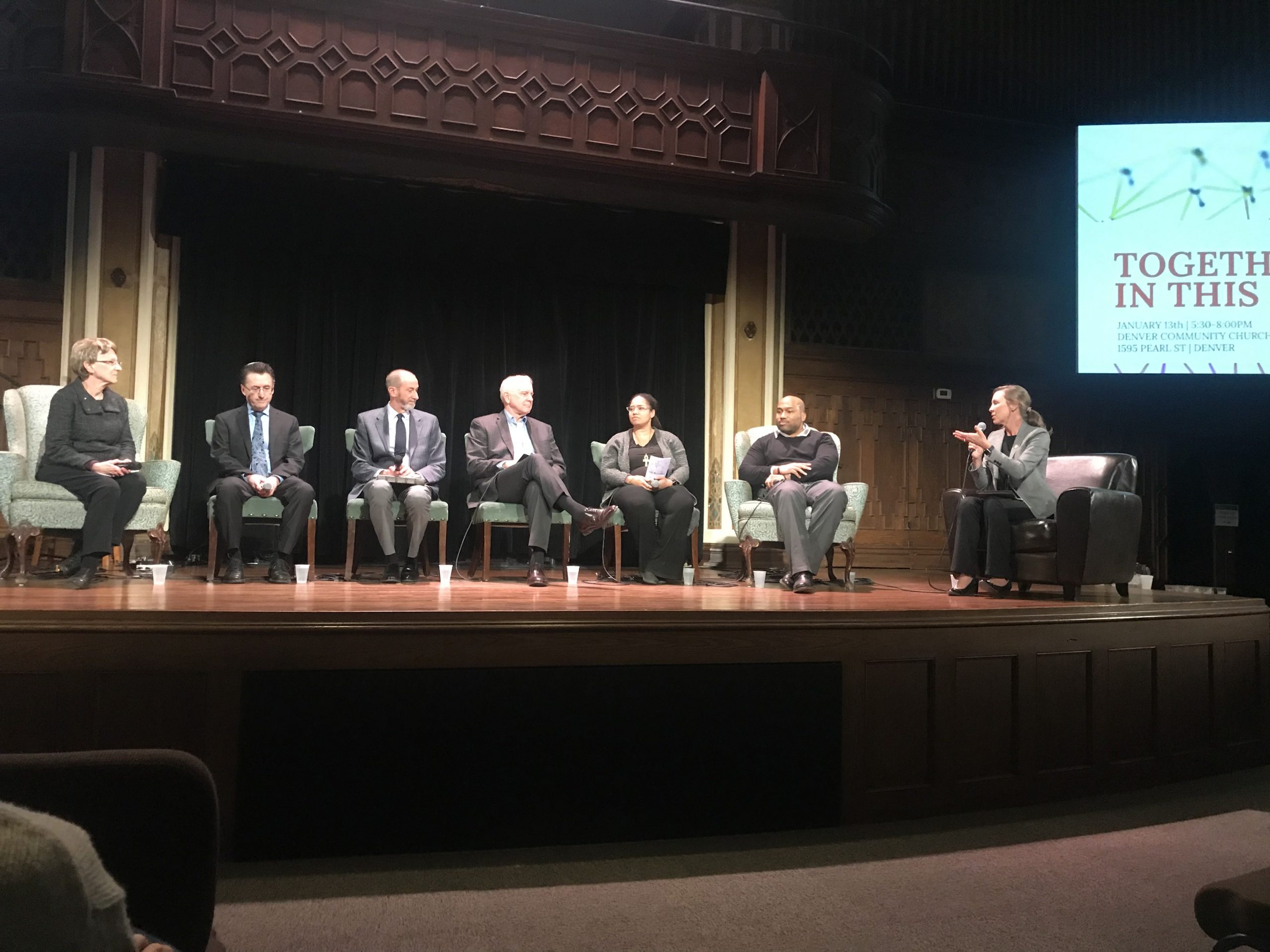 Monday night, the Interfaith Alliance of Colorado kicked off its series of events, called Together in This, with a panel of faith leaders who discussed political and ideological conflicts within their respective religious communities–and presented ideas for moving forward in a more cohesive direction.

Rabbi Dollin immediately brought up the topic of Israel. He said that rabbis in his community had stopped talking about Israel for a while among each other, because of their political divisions.

Dollin said that as President of the Rocky Mountain Rabbitical Council at the time, he arranged for a retreat for 25 rabbis that included a group discussion where everyone talked about their “connection to Israel, and what they found deeply moving about [their] connection to Israel.”

Dollin noted that each rabbi’s political concept of Israel had to do with the political situation in Israel at the time that each rabbi studied there. The older members experienced Israel around the time of the Six-Day War, which Dollin says leaves a very different impression from studying there as a younger rabbi, during peace talks.

Dr. Young, an Evangelical Christian, chose to bring up how the term “evangelical” has become politicized, which he describes as “identity theft.”

“For me, the understanding of what it meant to be evangelical is very closely tied to a profound religious experience, or conversion experience for me,” said Young, “as well as a set of convictions relating to the way we read scripture and the way we choose to live out our lives in line with scripture, as well as engagement in helping others understand who is this person that we worship.”

For Young, the fact that “evangelical” has been “reduced to not just a political term, but the support of a particular candidate in the political world, is intensely painful.”

Rev. Henderson inquired what Young’s thoughts were about a recent editorial published in Christianity Today, an Evangelical news publication. The article presents the opinion that President Donald Trump should be removed from office–a take that surprised many.

Young called the article “a ray of hope” for some, because it broadened the concept of evangelicalism. He also noted, however, that the article has raised “the stark divisions” in his religious community.

“[Evangelicals] are on the verge of being split into red and blue churches[…]and that also causes significant grief,” said Young.

LGBTQ+ issues were brought up by multiple panelists, including Dr. Hasan, Rev. Dr. Wolfe, and Rev. Leath, who is an openly queer woman herself.

Hasan spoke out about the divides he faces in the Muslim community when it comes to the LGBTQ+ community.

Hasan was told by a family member to resign from the Interfaith Alliance because of an Interfaith colleague’s stance in support of the queer community.

“I was left wondering, ‘How do I pick up the pieces with this family member? How do I reconcile this grave gulf that lies between?'” said Hasan.

“The Muslim community is one of the most diverse communities that you will find in America. Politically, religiously, ethnically, racially, you will find Muslims who are as pro-Trump as pro-Trump gets,” said Hasan. “And obviously you will find those who are every bit as invested as anyone in saying ‘impeach the president and let’s get someone else into the Oval Office.'”

Wolfe, a United Methodist, said that he has hope, thanks to his students’ willingness to fight for their identities.

After the decision made by the United Methodist church to disassociate from the LGBTQ+ community, Wolfe said he came back to Iliff School of Theology to find a “huge rainbow flag hanging in our foyer for everybody to see.”

Sister Weinzapfel, a Catholic, was the only panelist to address the oft-avoided topic of abortion.

“I get upset with the abortion question. Because, in our church, so often, this gets related to a party,” said Weinzapfel. “And yet, at the same time, I keep watching delegates come and hope that they would find some middle ground. You know, why can’t we reduce abortions? Why is it just either/or?”

In response to a question posed by Rev. Henderson about what might unite us moving forward in such a divisive time, Rev. Leath cited “The Space Traders,” a short story by Derrick Bell published in 1992, in which an ethical dilemma occurs–aliens come to the U.S. and ask for every black person in exchange for incredible wealth and technological advances. In the story, the U.S. government agrees to the deal.

“I also believe, as a descendant of slaves, that we need freedom. And that we need to rather die than be unfree, and working toward freedom together. And that’s the bottom line: that, if we are ever presented with such a trade,” said Leath, “whether it’s the question of the extermination of black people; of Jewish people; of LGBTQ people; of Muslim people; of any people. If we are ever given that opportunity again, if we ever see that opportunity in the future–we need to be ready. To die for freedom and love together, rather than to offer any one of us up.”

Future events in the Together in This series will continue to address how to overcome the country’s political and cultural divisions.