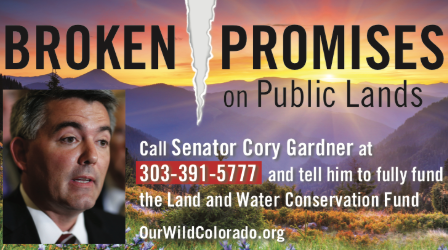 The billboards, which can be seen in Colorado Springs, Denver, and Gardner’s home town of Yuma, depict the Republican Senator next to the phrase, “Broken Promises on Public Lands.”

They also display Gardner’s phone number and urge Gardner to fully fund the Land and and Water Conservation Fund (LWCF), which receives money through fees on off-shore drilling operations by energy companies.

Activists say money for the LWCF has been diverted from land and water conservation projects.

“It is up to Senator Cory Gardner to demand 100 percent permanent funding for LWCF from Congress, starting this fiscal year,” said John Stansfield, a conservation activist, in a news release. “Congress has made disappointing decisions in previous years in regard to LWCF — diverting a large portion of this funding towards uses having nothing to do with conserving our public lands and waters.”

“As a lifelong Colorado Springs resident and lifelong educator, I know the importance of parks when it comes to our community and to our children,” said Terry Martinez, a retired principal in a news release. “This year the Senate is proposing to only allocate half of the funding that is intended for the LWCF.”

Gardner’s office did not return a call for comment, but the senator got an award last week from a conservative environmental group, alleging that Gardner is committed to protecting the environment.

The billboard campaign will run in Colorado Springs through the end of the year, as senators negotiate the funding fate of the LWCF.