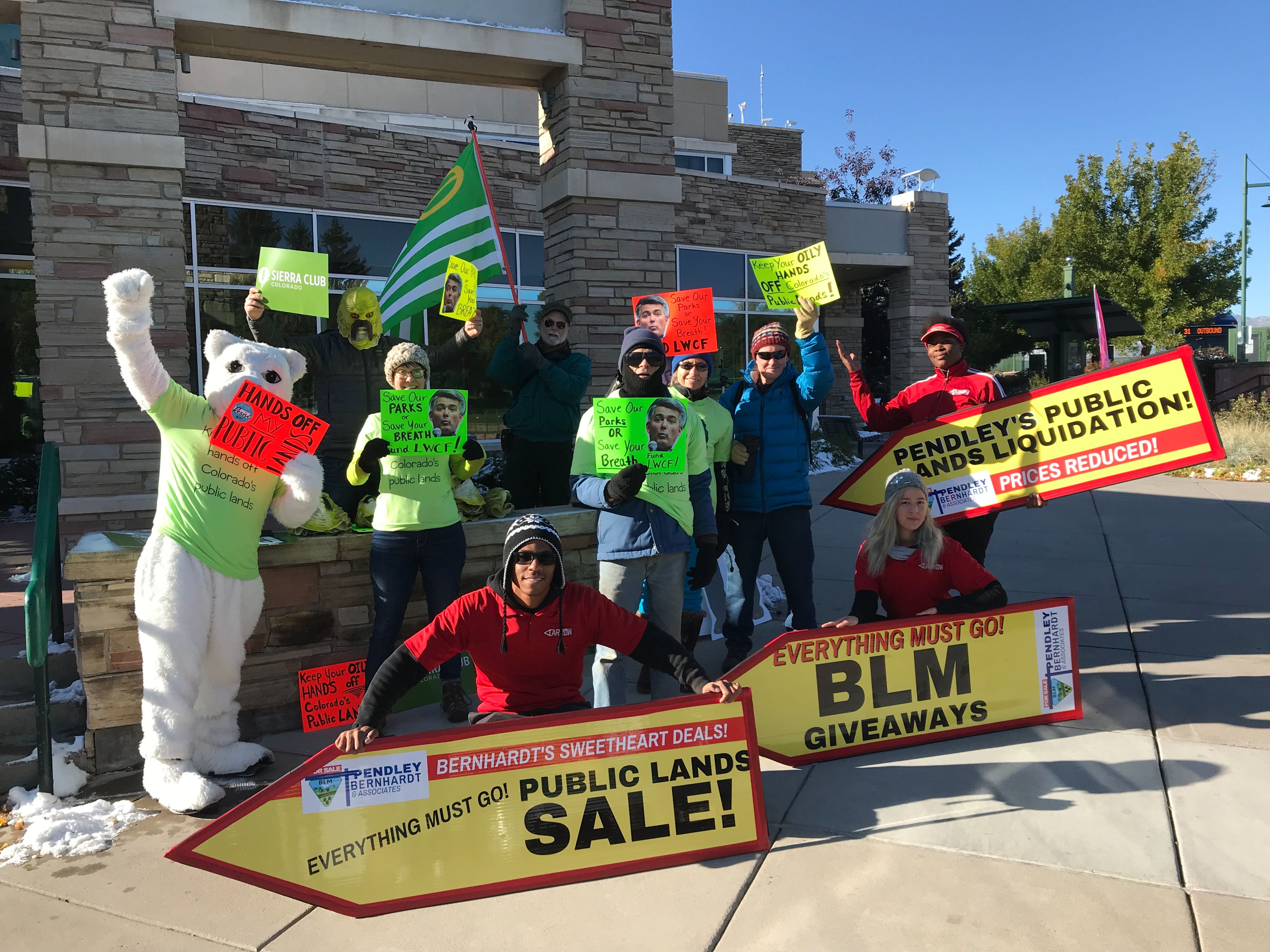 Sierra Club activists spotlighted environmental threats posed by William Perry Pendley, the Bureau of Land Management’s (BLM) acting director, who spoke on a panel Friday at the annual conference of the Society of Environmental Journalists at Colorado State University (CSU).

The activists, who protested in front of CSU, fear that Pendley, who was appointed to his position in July, will, among other things, push Trump to sell public lands.

“PENDLEY’S PUBLIC LANDS LIQUIDATION! PRICES REDUCED,” stated a sign held by one of about a dozen demonstrators at the event.

“This longtime president of a nonprofit that advocates selling off millions of acres of federal lands — who is now overseeing 245 million acres, more than 10% of the entire U.S. landmass — is right out of Trump central casting.” said Jim Alexee, director of Sierra Club Colorado in a statement about the protest.  “It’s up to us to stop Trump’s latest yes man from carving up and auctioning off our last wild places — not to mention sacred Native American spaces — to Big Oil and Gas.”

Asked about this stance by the Colorado Times Recorder at the SEJ event, Pendley said his personal opinions would have no impact on his decisions in his job, just as he said his denial of global warming would have no bearing on his actions at BLM.

“Once again, those views [about a “constitutional duty” to sell public lands] I expressed then,” he said. “That was then. This is now. My personal opinions in that regard are irrelevant.”

Promises no “wholesale” selling of lands, but how much?

Pendley told journalists at the SEJ conference that the Trump Administration does not favor the “wholesale” transfer of public lands, but he did not offer his definition of “wholesale,” leaving conference goers to speculate on how much land he might actually want the government to let go of.

“The Administration has been crystal clear,” said Pendley. “The president of the United States and the secretary of interior have been crystal clear. We do not believe in, we will not participate in, the wholesale disposal or transfer of federal lands. Bottom line.”

With respect to his 2016 National Review article, which was titled, “The Government Should Follow the Constitution and Sell Its Western Lands,” Pendley told the SEJ conference, “Well, I didn’t say there’s a constitutional duty to sell the land. What I did say was that the property clause, which is in Article 4, gives all that power to Congress. I also said that the founders intended to sell all the lands, but things change. Times changed. Congress passed the National Parks Act in 1910. Congress passed…the Federal Land Policy and Management Act, for which it said we have come to the end of the disposal era. We are no longer selling our federal lands. We are holding on to them. In other words, times changed. We are talking about the past.”

Pendley concluded his 2016 National Review article, after reviewing the congressional action mentioned above, by writing that it’s “hardly surprising that westerners think” federal lands in the West should be sold.

Environmental activists worry that Trump will nominate Pendley to direct the BLM, bumping him up from his acting role in the position.

“We also need to stop Pendley from being confirmed as the permanent Director of BLM, because it’s likely Trump will nominate him for that position,” said the Sierra Club’s Alexee.