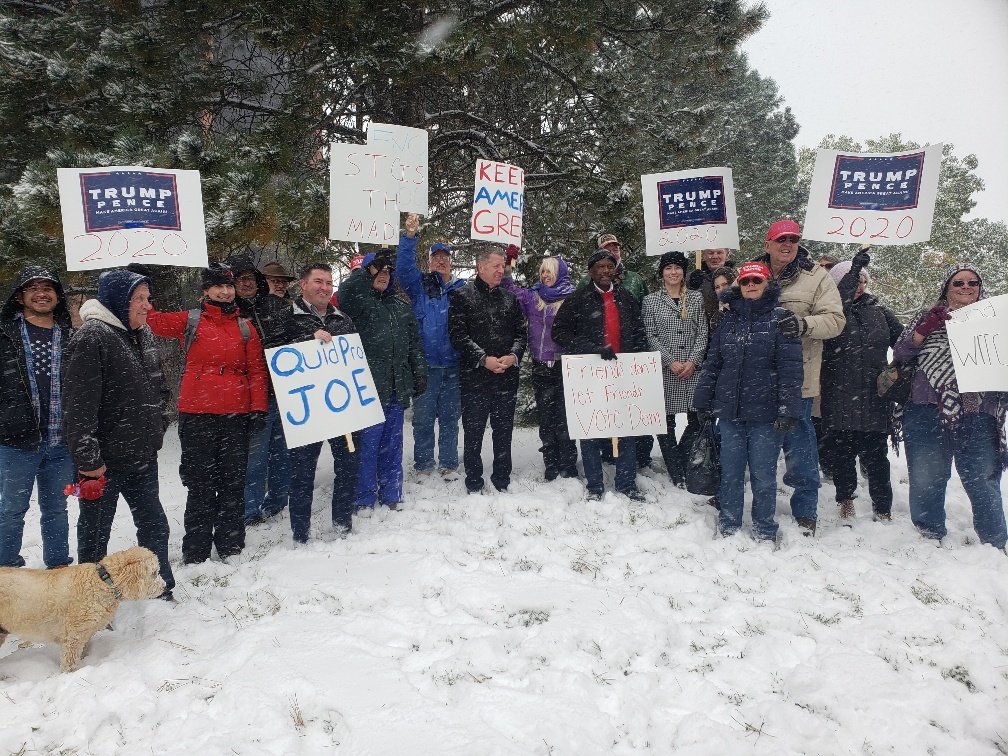 Joining fellow conservatives in staging “Stop the Madness” press conferences across the country today, Colorado Republicans battled freezing whether and an angry property manager to deliver a series of speeches calling on freshman Congressman Jason Crow, a Democrat who defeated Republican Mike Coffman last November, to “drop the impeachment inquiry.”

Standing at the doors of a building housing Crow’s district office in Aurora, Republican state party vice chair Kristi Burton Brown go the event going by introducing Casper Stockham, one of two Republicans vying for the chance to face Crow in November.

“I’m proud to be standing here with the Trump Victory Team with the [Republican National Committee] to challenge Jason Crow to stop the madness,” Stockham told the crowd, after criticizing a Colorado Times Recorder story highlighting racial themes relating to the press conference and the GOP Stop-the-Madness video.

“My primary concern is, I think these guys actually love impeachment and hate this president more than they like our country,” said House. “They need to stop the madness and get back and do the work that needs to be done in our country and let the will of the people and who we voted for govern us.”

Asked if he thought embracing Trump could be a liability to his campaign, especially after former Coffman blamed his election loss on the president, House said voters will decide based on issues, such as healthcare, not on Trump.

“Look at this, he’s the chief law enforcement officer of the country,” Neville told the crowd. “That’s his job. And he says, ‘Hey, can you get down to the bottom of this of what might have happened with this fake dossier that was actually created to use to spy on his campaign.’ He’s trying to get to the bottom of corruption, and they are using that as a way try to impeach him?”

It’s been rumored that Trump wanted the Ukraine to look into issues relating to the dossier, but this hasn’t been alleged by Democrats.

A man, who said he was the property manager, interrupted Neville and told the group they had to move from the front steps of the building to the sidewalk by the parking lot.

“Let’s move to the sidewalk,” said Neville, as he walked away with the group.

“That dude would not make it across the street at 710 KNUS,” said KNUS radio host Randy Corporon, who attended the event

“He must be a libtard,” said another attendee as she walked.

“As I was saying,” Neville said at the new location, “we have a president who is doing a wonderful job, and you’ve got Congressmen like Jason Crow who are just going to take orders from Nancy Pelosi and the Squad. He needs to take orders from the citizens of Colorado.”

Crow’s office did not return an email seeking comment.