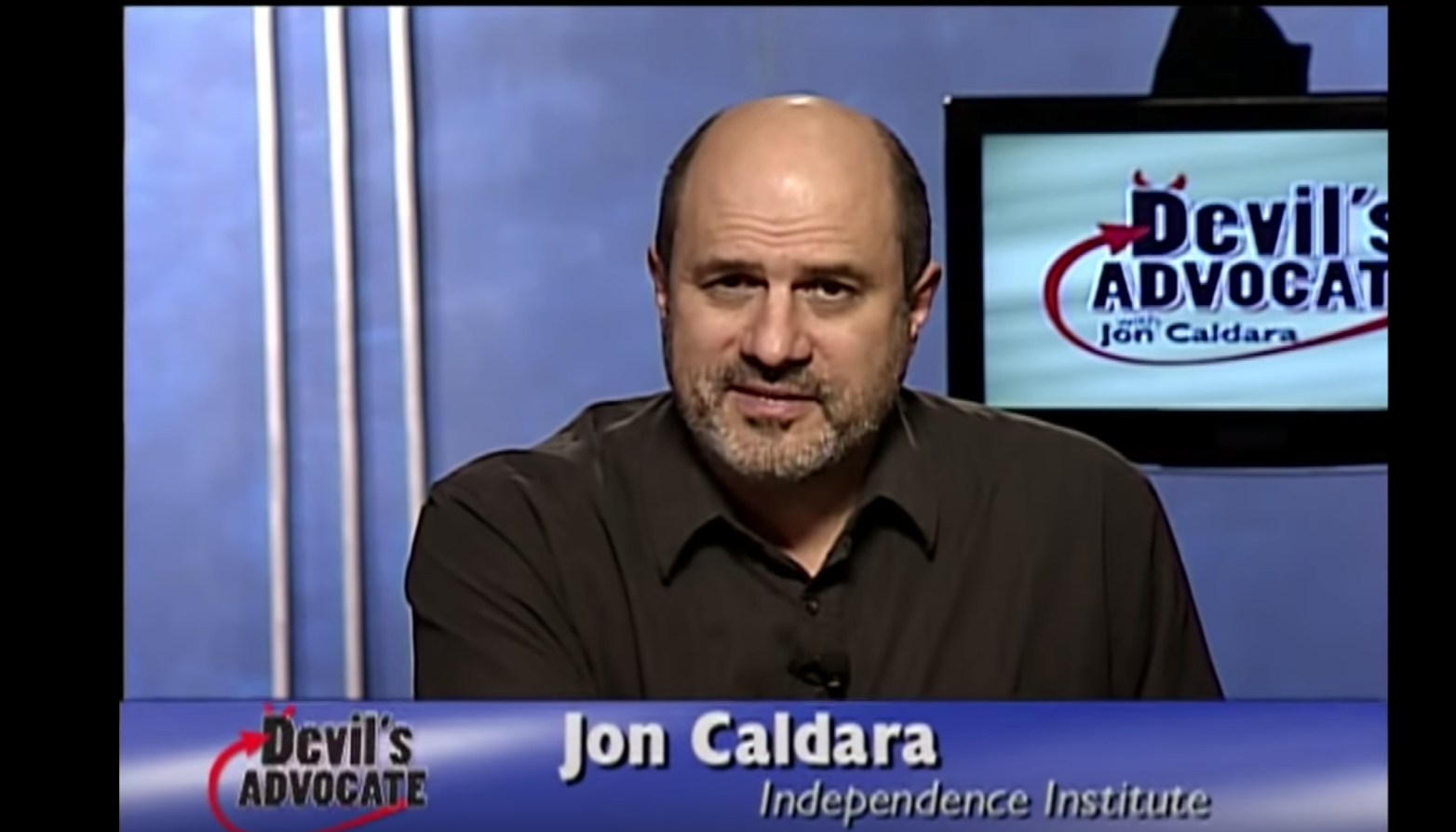 On Sunday, the Denver Post published an opinion column by libertarian activist and provocateur Jon Caldara entitled, “#MeToo replacing due process in the press.”

Let’s start by acknowledging that this latest screed by Colorado’s political bro-troll has succeeded at its most basic level — it’s made someone angry enough to give it more attention. This has been Caldara’s modus operandi for years. Yet he, and the editors willing to publish him, are doing real damage to real people by perpetuating harmful narratives about sexual assault.

Caldara’s column is quite possibly the most enraging thing I’ve ever read in a major newspaper, and while I strongly urged myself not to let it ruin my day, it just couldn’t be helped. So I decided to do an annotated version of it. Let’s begin:

“This column is not about “blaming the victim,” though many will say it is. It is about the inequity in the real-world when someone is accused of sexual abuse.”

We’re already off to a great start. If Caldara didn’t want his column to be about “blaming the victim,” and instead about the “inequity” between the accuser and the accused, I’m very unsure as to why he decided to lead with, well, blaming the victim. If you’re reading this to figure out what Caldara’s column is “about”, you might be here for a while. Buckle up!

“The Denver Post published a story about a University of Colorado Boulder student arrested on sexual assault. The headline read, ‘CU Boulder student accused of repeatedly sexually assaulting woman while she slept.’

“Raping a physically helpless victim?! It is truly stomach turning. Horrifying. For those who skim the headlines in search of other stories they want to dive into, meaning most readers, they’d miss the details of the alleged crime.”

Is anyone else not buying the claim that Caldara found the idea of this woman being raped “stomach turning” and “horrifying”? It seems Caldara wants to be taken seriously here, but given his long, strange history of using rape analogies to make political arguments, his purported outrage is difficult to accept.

In 2007, he described mill levy freeze as “fiscal date rape”, and then, in a 2017 Denver Post column, he compared TABOR opponents to date rapists in an apparent attempt to make a point about taxation and consent. It should go without saying that comparing rape to tax legislation trivializes the experiences of sexual assault survivors. This is not a man who takes the traumas of sexual assault survivors seriously.

“Those details should spur many questions.”

Or, if you are not the law enforcement official tasked with investigating the case and you believe survivors, not.

“The first thing we learn is that Shaver and the victim knew each other for three years — hardly unusual in rape cases. It is a misconception that most assaults are done by strangers.”

At this point, Caldara is attempting to appear as though he has any idea what he’s talking about. I have to give him credit here, though, because it is true that perpetrators often know their victims.

“Next, we learn that the two have had consensual sex in the past. This throws the incident into a different category.”

Oh? And what category is that? The “not sure I believe you now” category? The “maybe she was confused” category?

“The situation is instantly blurry,”

Soooo blurry! Can hardly see what’s going on here. But seriously, Jon, let me clear it up for you. If you actually understood the point you made above about how victims in rape cases usually know their rapist, you’d also know that perpetrators are often former intimate partners. Prior credit revoked.

“maybe changing it to date rape.”

Oh, thank goodness! It was only date rape, not rape. We can all go home now.

“But here is where eyebrows raise. The victim says she was assaulted after drinking alcohol and smoking marijuana then going to sleep wearing only her underwear in the bed of the man she accuses of attacking her. I wish we could live in a world where it was completely safe for a college student to get drunk and stoned with a young man that she previously had sex with, then crawl into bed with him in only her underwear and still have every reasonable expectation of complete safety. We don’t live in such a world. And we won’t anytime soon.”

Ok. This is probably the best (read: worst) part. A couple of things.

First, is Caldara telling on himself? What he’s basically admitting here is that he believes that raping a sleeping woman because she was drunk, stoned, and in her underwear is normal behavior. All I’m saying is that if that’s how Caldara thinks, I certainly would not want to run into him in a dark alley (where he would likely point out sexual assault doesn’t always occur in an attempt to appear as though he has any idea what he’s talking about).

Second, given that Boulder is Caldera’s home town, I’m shocked to learn he doesn’t know how hot it is there in July. I can only deduce from his confusion at a woman sleeping in her underwear that he spends Boulder summers sleeping in flannel pajamas. It’s the only logical conclusion here and you can’t convince me otherwise.

“The line that got me scratching my head was, ‘The next day, the woman said the same thing happened, and at this point she became suspicious Shaver was having sex with her while she was asleep.’

“If this woman believed she was assaulted why would she drink, smoke pot and spend another night with the attacker and put herself at risk again?”

Caldara apparently doesn’t understand that it can be extremely difficult for people who have been sexually assaulted to see themselves as victims. Research shows that the labeling of unwanted sexual experiences is generally a gradual process, and that many survivors never come to terms with the fact that they’ve been raped. He also somehow can’t wrap his head around why someone who’s been sexually assaulted might want to have a drink the next day. But, sure. Rape, as you remember, is oh so “stomach turning” and “horrifying” to Caldara.

“According to the article on the third night, she made a point of not getting drunk or stoned and expressly told him she did not want to have sex with him when she got into his bed, with him.” (My emphasis)

At this point, Caldara has descended into a plain mockery of this woman. He seems so nice.

“We used to hold as cherished American principle that one is innocent until proven guilty. In fact, it was the political left that guarded that value. Those liberals are now silent.

“Today the political left is assuming guilty until proven innocent.

“Colorado’s new red flag gun law for instance, unlike other states’ red flag laws, strips away the presumption of innocence when someone who has had their gun seized is attempting to get it back.”

Feels irrelevant here, I’m still waiting to figure out what the column is “about” if not blaming the victim.

“And what if Conner Shaver is wholly exonerated? It doesn’t matter. The 21-year-old engineering student is already punished, likely for life.”

If Shaver is wholly exonerated, you can bet the Denver Post will report on that, too. Speaking of irrelevant details, I wonder how his engineering degree is coming along.

“Every potential employer running even a simple Google search will read the headline, ‘three counts of sexual assault on a physically helpless victim.’ Next applicant, please.

“Not just employers, but thanks to technology and connectivity everyone who will ever know him in the future can easily learn of his Scarlet Letter, including women interested in dating him.”

You can tell a lot about a person by what they choose to be concerned about. Caldara’s concern is not for a rape survivor who we have no reason not to believe, but that her alleged rapist may have a smaller dating pool in his future.

“In the real-world, by publishing his name, the press has passed judgment and sentenced him in a case that is complex to even try to describe, let alone prosecute.”

This is the part where if Caldara had even a shred of human decency, or sense, he’d at least nod to the fact that sexual assault cases, even when successfully prosecuted, rarely lead to a conviction. Out of every 1000 instances of rape, only 46 reports lead to an arrest, 9 of those are actually referred to prosecutors, and 5 lead to a conviction. These cases are indeed difficult to prosecute, one reason being that critical evidence from rape kits often goes unexamined due to massive backlog. A lack of a conviction isn’t the same thing as an absence of guilt. I know it’s going to shock you, but that’s not where Caldara is going with this.

“And if this is a false allegation altogether? Does the woman pay a similar price? Her name appears nowhere in the news story. Whoever she is, she faces no such life-long penance.”

If this is a false allegation altogether, you can bet it’ll be covered in the Denver Post. But as we know, false allegations are incredibly rare, so don’t hold your breath, Jon. Does anyone else find it suspicious that through all this speculation, he has not once entertained the possibility that this woman is telling the truth?

“In a court of law, you may face your accuser. In a trial of newspaper headlines that last forever in the searchable internet ether, your accuser is forever anonymous.

“In the real-world Conner Shaver has no right to due process. He is guilty for the rest of his life whether he did it or not.

Yes. #HeToo. At this, I am speechless.

To be clear, I believe it’s entirely possible to have a reasonable debate about whether the names of accused rapists should be published in major newspapers without attacking accusers. But that’s not what Caldara did. Caldara used some of the most tired victim-blaming tropes in the book in order to undermine the credibility of a young woman who says she was raped, and, in my view, go so far as to justify her rape. Declaring a column “not about blaming the victim” does not make it so.

Caldara’s column is toxic and dangerous, and could have a chilling effect on the already abysmally low rate of reporting for sexual assault. When people like Caldara are given a platform to maliciously undermine the credibility of sexual assault survivors and mock them for sport, more are deterred from coming forward and our communities are less safe. Is the Denver Post okay with that?

Madeleine is a journalist covering Colorado politics and policy with a focus on reproductive health, rights, and justice. In 2016, she graduated from Colorado College, where she studied Comparative Literature and Journalism. In Colorado Springs, she worked in the newsroom at KRCC, southern Colorado’s NPR affiliate, before moving to Denver to pursue a career in journalism and advocacy. In addition to the Colorado Times Recorder and KRCC, her work has appeared in Rewire.News, Jezebel, BigMedia.org, The Colorado Springs Independent, and ColoradoPols.com. Reach her by email at [email protected]m