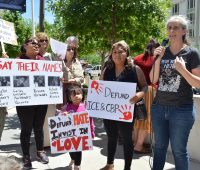 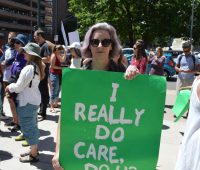 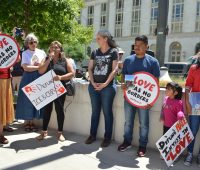 Hundreds of people showed up to Colorado Republican Senator Cory Garder’s office in Denver Tuesday as part of a nationwide wave of protests against the inhumane treatment of immigrants in detention and deportation proceedings.

The public outcry comes as news continues to trickle out about poor conditions at immigrant detention centers, where investigators have discovered severe overcrowding, a lack of access to basic sanitation and nutrition, and immigrants sleeping on concrete floors with no bedding.

An immigrant detention center in Aurora, in particular, has been the subject of scrutiny after reports of quarantines due to infectious disease outbreaks and a history of negligence toward immigrants’ medical needs.

Organized by local Indivisible groups and the American Friends Service Committee, the protest featured chants, singing, and people sharing personal stories about how the U.S. immigration system has affected them and their loved ones.

The protest was followed by a march around Gardner’s office, during which time a handful of protesters delivered a letter to Gardner asking him to cut funding for federal immigration enforcement, citing an ever-increasing budget for a system they describe as “abusive.” They’re also asking him to shut down detention camps where immigrants of all ages are being housed.

Gardner hasn’t addressed concerns about poor conditions in detention camps, but attended a Colorado Compact event last week where he reaffirmed support for the Dream Act, a bill to protect certain immigrants who were brought to the U.S. as minors, called “Dreamers,” from deportation.

The Colorado Compact was launched in 2012 with the help of Sen. Michael Bennet (D-CO) and former CU President Hank Brown, a Republican, as a bipartisan effort to push “common sense immigration reform.” 87 business, political and community leaders signed the initial document, with many more adding their names over the following years.

Although Gardner supports the Dream Act, a shift in position from when he opposed the legislation as a member of the House of Representatives in 2013, he’s against Colorado’s ASSET law, which allows colleges and universities to let Dreamers pay the in-state tuition.

In March, Gardner voted against a resolution to block President Trump’s national emergency declaration over funding for a border wall.