Planned Parenthood Wants You To Vote For These Candidates Come November 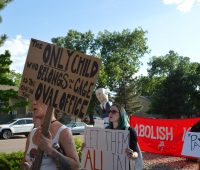 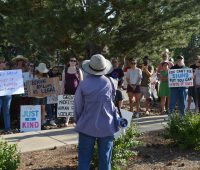 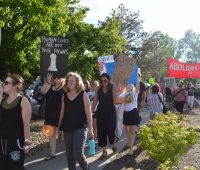 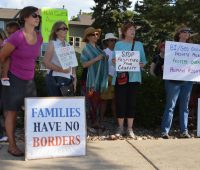 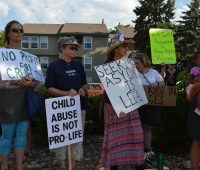 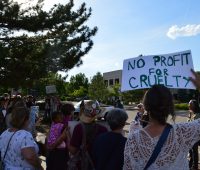 A protest outside BI Incorporated, a Boulder-based company that has raked in more than half a billion dollars in contracts from Immigration and Customs Enforcement (ICE) in the past few years, drew more than a hundred people on Thursday evening.

The protest comes amid revelations of inhumane conditions at ICE detention facilities, like the one in nearby Aurora, which has recently been under added scrutiny after reports of infectious-disease outbreaks and a history of neglecting the medical needs of detainees.

Through a contract with ICE, the Aurora detention facility, in addition to many of those found to have inhumane conditions, is run by GEO Group, one of the nation’s largest private prison and detention corporations.

GEO Group is the parent company of BI Inc, which began as a cattle-monitoring company before partnering with ICE to supply ankle GPS monitors for immigrants. Ankle monitors are worn by undocumented immigrants, including those seeking asylum, while waiting for their cases to wind their way up the immigration system, a process that can take years.

The use of ankle monitoring devices has become increasingly common after the Trump Administration faced fierce public opposition to their policy of separating families at the nation’s southern border and after courts ruled that families with young children could not be detained indefinitely.

BI Inc. claims that ankle monitors provide an alternative to detention while still ensuring that immigrants show up for court proceedings and don’t disappear into the U.S.

But immigrant rights advocates have pointed out that the number of undocumented people in detention has been rising steadily even with the proliferation of ankle monitors, suggesting that they’re not truly an alternative to detention, but an additional way of restricting the freedom and profiting off of undocumented people.

“The number of immigrants in detainment has grown by 40 percent in the past two years alone,” Farnan added.

Ginna MacPhie also spoke at the protest, raising concerns about the humiliation and discomfort caused by ankle monitoring devices, which make immigrants appear like criminals even when they have committed no crime, and in many cases are actually fleeing crime-ridden areas and seeking asylum.

“It’s really a horrible system for people who have committed no crime,” she added.

Immigrants who wear ankle monitors have also reported negative physical side effects. A complaint filed with the Department of Homeland Security’s Office of the Inspector General documents a range of medical problems caused by ankle monitors, with one woman experiencing electric shocks and requiring hospitalization after she began wearing the device.

Not only does BI Inc. manufacture the tracking devices, but they also oversee the program as a whole, serving as case managers and conducting weekly check-ins, home visits, and setting geographical limits.

A report from the Center for American Progress, for example, details the case of Marco Tulio Hernandez, an asylum seeker who was residing in Louisiana, and was given permission by his case manager to travel out of state, but then was apprehended by ICE and sent to a detention camp upon his return.

Bruce Norikane told the crowd that for him, it’s somewhat personal, as his parents and grandparents were incarcerated in Japanese internment camps in 1942. He said the situation immigrants are facing now is worse than what his family had to endure during World War II:

“They lost everything. They lost farms, houses, all of their possessions. They were told they could only bring what they could carry, but please bring with you bedding, sheets because the government didn’t provide that for them. Now that was horrendous. That was a horrible, unconstitutional miscarriage of justice. But as horrible as it was, it was not as bad as what’s happening today, because my parents were kept together in a family unit. Why? Because back then the government was paying for this, and they didn’t want to expend extra energy. So they put them in a family unit, and allowed them to take care of each other. And as horrible as that was, it was a lot better than being separated by thousands of miles like the Trump Administration is doing today…. As horrible as it was, all of my life, my parents, my family, we never believed that the United States government would ever do that again. And now, today, it is happening again, and it is worse. They were not put in cages and required to sleep on concrete floors. They were allowed to bring bedding in so they could have something to cover them while they slept. In fact, many of them actually sewed, made clothes, they took care of each other, they ran schools inside. None of that is allowed by ICE and GEO today. GEO puts people in cages with eight people in a cage, and they have no privacy. The conditions are absolutely reprehensible. So one of the reasons I’m here today, is if someone had stood up for my parents, if many Americans had stood up and said this is wrong, this is what is happening, they would have been released, they might not have had to go to prison. So today, we have a choice. We can stand up. We can stop this. And that’s what we’re here for today.”

In recent weeks, reports about the GEO Group’s treatment of detainees at the Aurora detention center have prompted action from some of Colorado’s Democratic members of Congress.

In May, Congressman Jason Crow introduced legislation that would allow members of Congress to conduct investigations of immigrant detention facilities within 48 hours of notifying the facility. Crow began pushing for more public oversight in February after being denied entry into the Aurora facility, which is located in his district.

Thursday’s protest is part of a recent surge in activism around ICE detention facilities in Colorado.

On Sunday, protesters showed up in large numbers to the detention facility in Aurora. Video footage shows protesters chanting “let them out” while detainees can be seen through windows waving at them and holding up handwritten notes asking for help.

Another protest at the Aurora facility is scheduled for Sunday, June 30. It will feature a Jewish prayer service and Colorado Attorney General Phil Wiser as a speaker.