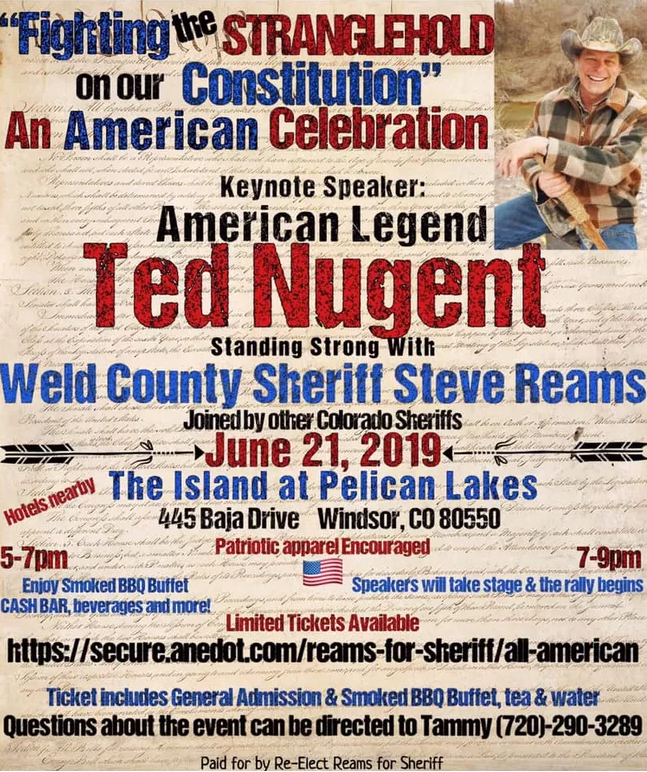 A few years ago Rocker Ted Nugent was on Colorado radio saying the Republican Party has “no balls” and “someone extracted their scrotum with a rusty shiv.”

Now he’s saying Trump is his “hero,” and Nugent is doing a fundraiser for a Republican sheriff in northern Colorado June 21.

Here’s what Nugent said on Colorado radio in 2014 when asked what happened to the Republican Party:

“Someone extracted their scrotum with a rusty shiv,” Nugent replied. “They have no balls.  I don’t know where this ‘Let’s be Mr. Rogers with a Lawrence Welk soundtrack tie adjusting’ mantra came from, but my god! If there’s a life-support system attached to the GOP, it’s flat-lining.”

But now things appear to be looking up for Nugent.

“Finally we have a president who sounds like you and I and your dad and mom at a campfire,” Nugent told KHOW’s Dan Caplis May 10.

“[Trump] is a we-the-people guy,” said Nugent, who described Trump as a “good friend” and “my hero.”

And Nugent also loves Weld County Sheriff Steve Reams, who’s been fighting against Colorado’s red flag law, which allows a judge to authorize the confiscation of guns from people deemed dangerous to themselves or others. Reams has threatened not to enforce the new law, passed by Democrats this year.

“I’m cocked, locked, and I’m ready to rock, and I can’t wait to get back to Colorado, ’cause I have a feeling if I’m with Steve Reams I’ll be in the real Colorado,” said Nugent on air.

Nugent said he’s watched Colorado turn into a suburb of San Francisco, which he described as dominated by “feces, needle Capitol, celebrants.”

“I’ve always confronted the abuse of power, and the corruption, and the cronyism,” said Nugent, who says he drives the left “berzerk.”

The Nugent/Reams event at the Island at Pelican Lakes, in Windsor begins at 5 p.m. with a barbecue. A rally follows at 7 p.m.