The Shomer: Ye, Though I Walk Through the Valley of Death-Con 3 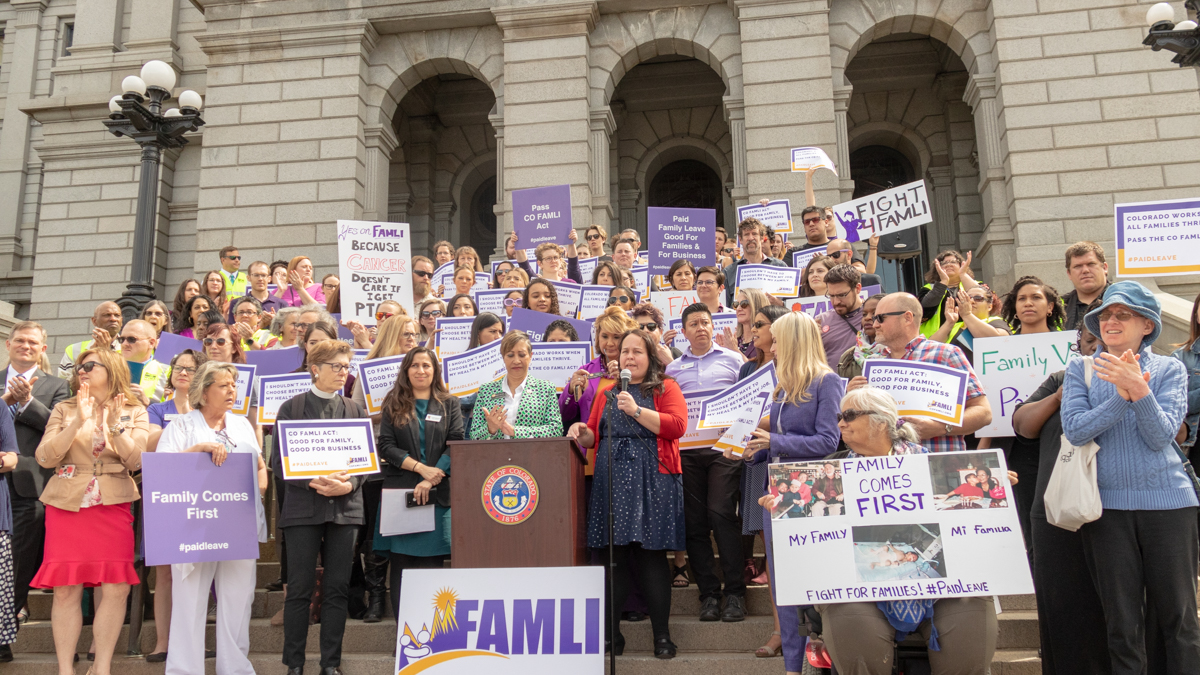 Business owners, working families, and policy advocates rallied Tuesday at the Capitol in support of a bill that would bring paid family medical leave to Colorado workers and their families.

The rally today organized and hosted by 9 to 5 Colorado, an organization dedicated to influencing the public agenda for working women’s issues, and Good Business Colorado, an statewide organization of progressive business owners and industry leaders.

Attendees of the rally on the western steps of the Capitol included small business owners like Lisa Goodbee, owner of Goodbee & Associates, a civil engineering consulting firm based in Denver, who supports the proposed FAMLI Act.

“I have been an advocate for [paid] family leave in Colorado for years and years. I currently offer a family leave policy to my employees,” said Goodbee, “primarily because it’s best for retention of staff. I work with engineers who are not easy to replace. It decreases turnover and helps with the moral of my staff. It is just the right thing to do.”

Companies throughout Colorado are not required to offer paid leave in any form. And for many business owners, especially owners of small businesses, the task of providing paid leave is often unaffordable despite the desire to do so.

Pete Turner, owner and CEO of Illegal Pete’s restaurants, said he has even, in some cases, provided paid leave for his employees given their circumstance, despite his company not being able to provide that for everyone.

“We don’t [have paid family leave], we have informally done it for three of our employees over the years. I paid them full time for three months,” said Turner. “I asked them to maybe do a little work here or there as they could from home because it is something I really believe in.”

Turner, who started his business when he was 24 and now has roughly 450 employees in Colorado and Arizona, spoke about his passion for providing a sustainable job that works for his employees.

“It’s my goal to provide a livable and sustainable job where you can save for the future, you have health insurance, you have paid medical leave if you need to care for a baby or for a loved one,” Turner said. “This was the last major step that we’ve [Illegal Pete’s] been looking at as a major benefit.”

Furthermore, working families employed by businesses that are struggling to provide paid leave programs are the victims of a system working against them, according to Rebecca Zimmerman, a Masters student of social work at the University of Denver, who attended the rally to highlight the impacts of not having paid leave on people suffering from domestic violence.

“This FAMLI bill is really special because it includes what we call ‘safe time,’ which is paid time off to deal with the effects of domestic violence, stalking, or sexual assault,” Zimmerman said. “That would have allowed me to get my life back on track rather than getting in trouble at work for trying to handle all of this stuff in secret. I would have been able to just take some time off, deal with it, and go back to work, and be a more productive employee.”

Other workers across Colorado expressed their desire for paid leave to help them deal with circumstances impacting their ability to work in their personal lives.

Some business groups, and most Republican lawmakers, oppose the bill, because they say, among other objections, it is too expensive and it should be up to businesses to decide whether to provide paid days off for family medical issues. They also say a federal program, which is less generous, is sufficient.

According to a recent poll conducted by Myers Research & Strategic Services and Goodwin-Simon Strategic Research, approximately 68 percent of the voters said they support paid family leave, a number which grew (71 percent) after they were given more specific information about the proposed FAMLI Act program.