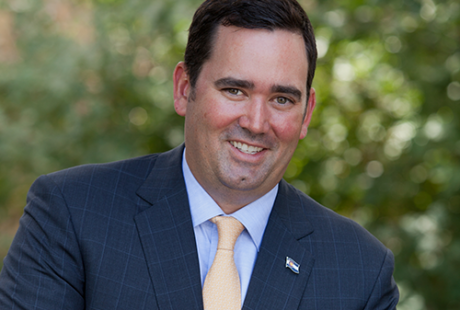 A man accused by five people of yelling “Sieg Heil” and doing a Nazi salute at a Walker Stapleton campaign event has a Letter to the Editor in Colorado Politics this morning defending the Republican candidate for governor against media coverage of his family’s ties to the Ku Klux Klan.

As the Colorado Times Recorder reported yesterday, Russell Haas, a conservative activist in Jefferson County, allegedly drove up to protesters at a Stapleton campaign event last month and yelled a Nazi slur while holding his arm outstretched in a Nazi salute out of his car window.

This morning, Colorado Politics published a Letter to the Editor written by Haas in which he defends Stapleton from what he referred to as the “media mob” and criticizes recent news coverage surrounding the candidate’s family history of KKK involvement. He wrote:

“Is the continuing drumbeat of media articles topped with banner headlines, linking gubernatorial candidate Walker Stapleton with his tainted, but long deceased, ancestor, anything but an effort to sway voters to favor his opponent?

So what needs to be done to rid Walker of this journalistic albatross?

… Isn’t it time for all to return to responsible journalism and deal with issues of the present day?”

Haas, like many Colorado conservatives, argues that it’s unfair to be “blamed for the sins of our fathers.” In this case, it’s Stapleton’s great-grandfather, a prominent Klansman who served as Mayor of Denver in the 1920’s.

Stapleton has not condemned the actions of his ancestor, despite recent news coverage regarding the issue and a grassroots effort to change the name of Denver’s Stapleton neighborhood, which honors the former mayor. And, in fact, Stapleton once campaigned on his family’s record of “public service” and specifically praised his great-grandfather for his “accomplishments” in a 2010 campaign ad released during Stapleton’s first run for statewide office.

Despite the fact that Stapleton himself once used his family’s political legacy to bolster his own campaign, Colorado conservatives like Haas continue to suggest that the media is illegitimately tying Stapleton to his family’s problematic past.

Today’s Letter to the Editor is not Haas’ first in Colorado Politics. In March, he penned one that advocated for ending the Colorado Civil Rights Commission. He wrote:

“Other than in a totalitarian state, where else would such blatantly biased jurors be tolerated?

As these travesties of justice describe the fate of unfortunates dragged before the misnamed Civil Rights Commission (and various administrative law courts as well), isn’t it imperative that a stake be driven through the  heart of said commission, and it be allowed to naturally expire, unamended, as per its 2018 “sunset” requirement?”

The Stapleton campaign routinely ignores requests for comment from the Colorado Times Recorder.