The Russian company paid Facebook a combined 216 rubles ($3.50) to promote two “sponsored posts” from its page “LGBT United,” which pushed memes with poorly worded pro-LGBT arguments. The minimal investment produced equally minimal results: 537 impressions and just 56 clicks. The posts ran a month apart in July and August of 2015. They copied text from progressive reporters covering the Masterpiece case and paired it with their own inflammatory, albeit stilted, commentary.

The Masterpiece Cakeshop case is currently before the United States Supreme Court. It first gained national attention in December of 2013 when the Colorado Civil Rights Division upheld state anti-discrimination laws by rejecting the lawsuit brought by the Alliance Defending Freedom (designated an anti-LGBT hate group by the Southern Poverty Law Center) on behalf of baker Jack Phillips. It is the highest-profile legal debate over LGBT civil rights, making it an obvious choice for Russian trolls looking to exploit politically divisive topics.

The first ad featured a bizarre image of an ax-wielding Christian Bale from the film American Psycho, altered to show the blade aiming at rainbow wedding cake. It highlighted the Masterpiece case as well as another similar case out of Oregon, also being litigated by ADF. The post plagiarized its first two paragraphs from  a July 10 Think Progress article by Zack Ford, who wrote in part,  “In the wake of the Supreme Court’s ruling in Obergefell v. Hodges, conservatives are eager to highlight Phillips and the Kleins as evidence that religious freedom is under attack. In fact, they have actually invented a new claim about how these bakers’ ‘free speech’ is under attack and how they’re thus the real victims.”

The English deteriorates considerably in the third paragraph which concludes, “They can speak about their bigotry and ignorance, not to practice it!”

“Generally, I’m flattered when others find my writing compelling enough to share. Here, though, the intention seems nefarious — if poorly executed. By separating my words from the context of critiquing ADF, the group that’s actually fighting to justify discrimination against LGBTQ people, they attempt to frame me as the provocateur. Unfortunately, I’m not surprised to see such divisive tactics from a country that demonizes its own LGBTQ citizens.” 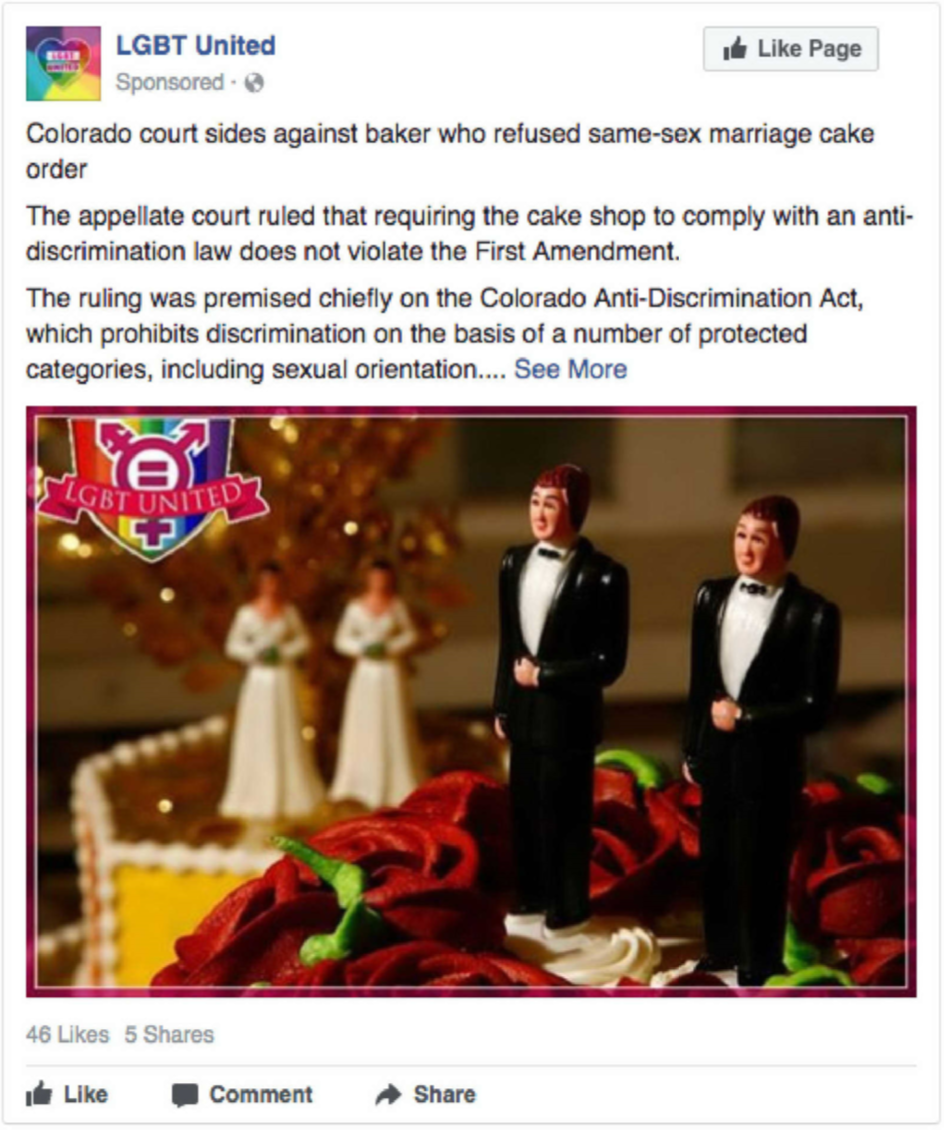 The second Masterpiece ad hijacked an August 13 Huffington Post article by Cristian Farias, who covered the Colorado Court of Appeals ruling in favor of Charlie Craig and David Mullins, the couple unlawfully denied a wedding cake by baker Jack Phillips. This time the Russians used a standard “two men cake topper” image and added a few troll-worthy lines of their own: “I’m so sick of this true Christians who have never taken the Bible in their hands reading or listening someone who read ancient texts and then declaring them to be applicable to today violates the scriptures. God didn’t support divorces, so why did bakers not refuse service to divorcees?
Anyway, the truth on our side…finally. So, grab your bae and go to eat some cakes!”

Nondiscrimination protections for sexual orientation are law in 21 states and countless cities across the country, but they are not specifically enumerated in federal law. The court is expected to issue a ruling on the Masterpiece Cakeshop case this summer.