Gardner’s 2015 statement on an FBI law enforcement alert concerning Middle Eastern men reportedly intimidating Colorado military families became the basis for a Facebook “sponsored post” purchased by “Being Patriotic,” one of the most successful Facebook pages created by the Kremlin-linked Russian firm. 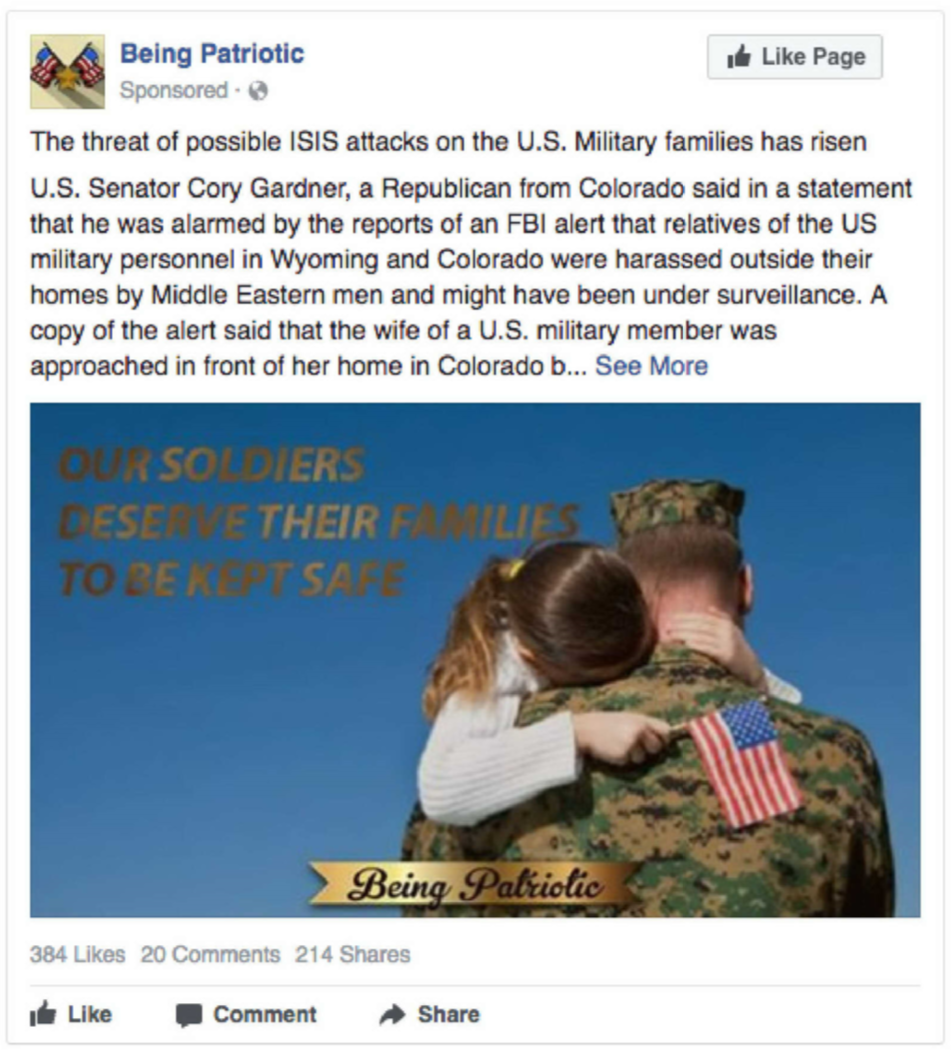 The post begins with information derived from news coverage of the FBI alert and Gardner’s response, before launching into fear-mongering. It used Senator Gardner’s statement as proof of an increasing threat of ISIS attacks on US military families and as a potential indication of the inability of the country’s intelligence and law enforcement to protect Americans.

The full text of the post reads as follows:

“The threat of possible ISIS attacks on the U.S. Military families has risen.

U.S. Senator Cory Gardner, a Republican from Colorado said in a statement that he was alarmed by the reports of an FBI alert that relatives of the US military personnel in Wyoming and Colorado were harassed outside their homes by Middle Eastern men and might have been under surveillance. A copy of the alert said that the wife of a U.S. military member was approached in front of her home in Colorado by two men. The incident took place in May. Similar incidents in Wyoming repeated in June.

We see that the threat of possible ISIS attack on families of the U.S. military has risen. And when the threat is so real the US intelligence agencies are doing nothing. As a matter of the fact they don’t fully perform their duties. First of all, the US security forces should take all appropriate measures to identify people who scour after the wives and children of the U.S. Military. Secondly, families of the U.S. Military should betaken under special protection of the police and the FBI. If even one hair of the U.S. Military family members will be lost then the work of American secret services isn’t worth a dime as they cannot maintain security on the American soil. In case of a negative scenario there won’t be any need in their work. And this will be the final nail in the coffin of the American secret services.

Let’s remember the last FBI and NSA failures, such as failure to stop the Boston Marathon Bombings and so on. Our soldiers fight for America at the other end of the world and they deserve that their families should be kept safe.”

“I am alarmed by reports out of Denver that military members’ families have been harassed outside their homes and may be under surveillance,” Gardner said. “This news comes less than two weeks after FBI Director James Comey, speaking in Denver, warned of the heightened threat from the Islamic State that Colorado specifically faces. The FBI has now alerted all Colorado law enforcement agencies, and my office is in contact with the appropriate officials. I will continue to closely monitor the situation, and I encourage Coloradans to report suspicious behavior to the FBI.”

Facebook identified this ad, along with approximately 3,500 others, as having been created by the Russian troll farm Internet Research Agency. The goal was to generate fear confusion and division online. Democrats on the House Intelligence Committee posted all of the ads to the committee website earlier today.

According to the statistical data, the ad ran from August 7-9, just two days after the news coverage of Gardner’s statement. As with most of the ads, it was a relatively small buy with limited but effective return. The Russians paid Facebook 500 rubles (about $8.10), for 1,867 impressions and 217 clicks, targeted broadly at users and friends of users who liked the “Being Patriotic” page.

A request for comment from Gardner’s office was not immediately returned.