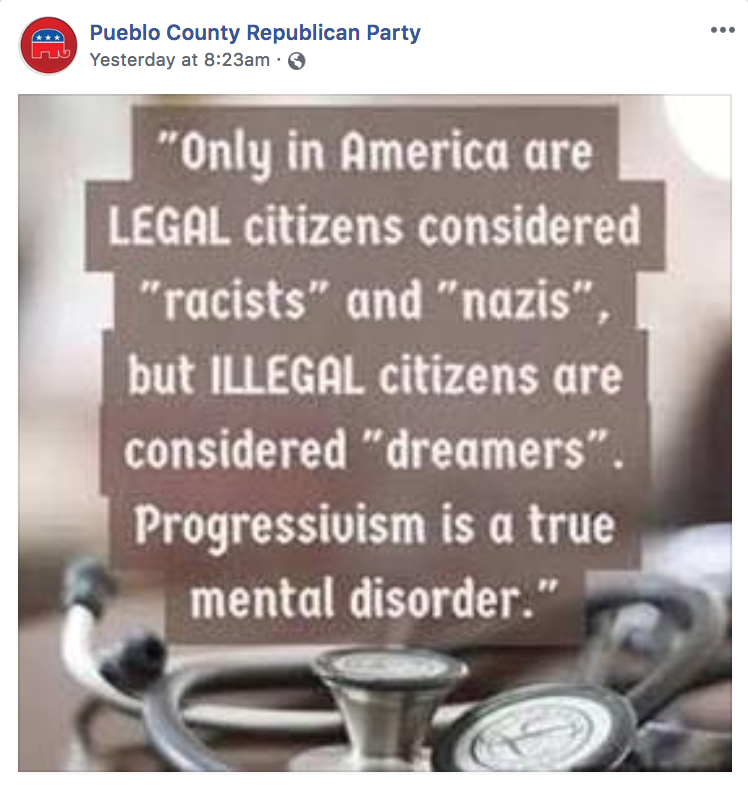 There’s a lot of talk about how divided America is these days, and a trip through the Facebook page of the Pueblo County Republican Party proves the point.

One meme on the page states:  “Progressivism is a true mental disorder.” That stuck to me, being a progressive and all.

I have to admit I question my own sanity when I see Trump in the White House. How can this possibly be real?

But why do Pueblo’s Republicans think we progressives are crazy?

Because we call the undocumented children of immigrants, who were brought here illegally by their parents, Dreamers. We call these incredible, inspirational kids Dreamers.

And we call racist people “racists.”

That’s our progressive mental disorder speaking, according to the GOP in Pueblo.

This is from the official Republican Party of Pueblo, Colorado. Presumably, they’ll explain things, in the name of honest civil discourse.

I tried to cross the divide and asked Pueblo County Republican Chair Marla Spinuzzi Reichert about the meme.

She didn’t return my call.

So we have to speculate. Maybe the Pueblo Republicans haven’t met any Dreamers. And they’ve missed the racists and bigots that are all over the news and in the White House?

How else to explain why they would call progressives mentally ill for loving Dreamers and calling out racists.

I won’t suggest that Pueblo’s Republicans have a mental disorder themselves. That’s a step too far and too rude for a true progressive to take.