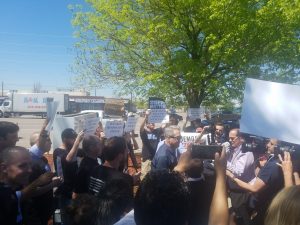 A flock of journalists, from an array of media outlets, covered a rally of about 100 people at The Denver Post headquarters today, pointing cameras at marching and chanting Post reporters, who called on the newspaper’s hedge-fund owner, Alden Global, to find a buyer who cares about journalism and the community.

One of the journalists covering the rally didn’t want to be interviewed about it, saying he needed permission from his bosses before commenting to the press.

But another, KOA 850-AM’s Jerry Bell, quickly offered his take:

“It’s horrible,” Bell said when asked how it felt to cover the rally. “A lot of those people are my friends. I’ve worked side-by-side with them for years. It’s heartbreaking.”

Despite somewhat strong chants of, “What do we want? A new owner. When do we want it? Now,” an undercurrent of horribleness and heartbreakingness, not to mention vulnerability and sadness, indeed pervaded the rally today at the industrial-scale Post headquarters.

That’s because no one at the rally, or chit chatting on the side or anywhere on the internet, explained how The Post’s predicament, with a hedge-fund owner that’s chipping away at the newsroom, ends well.

No path toward a solution is on the table, but, still, the goal was clear, as expressed in a chant that went, “Hey, hey, ho, ho, Alden Global has got to go.”

A dubious group of potential buyers, who rode a media wave after the Post’s former Editorial Page Editor Chuck Plunkett penned an editorial critical of Alden last month, has disappeared, at least for now. Plunkett himself resigned after a follow-up editorial was rejected by Alden executives.

Plunkett spoke at the rally, expressing the painfully obvious truth that the journalists in front of him were uncomfortably protesting and marching.

But Plunkett also told the crowd and the reporters present, “Local journalism is way too important to be neglected, as it has been over the past few years. Local journalism is way too important to be censored, as we are starting to see now. We really need Alden Global to come around and start reinvesting in its newsrooms and start looking for a way to preserve journalism across all its holdings, particularly at the Denver Post. Or they need to sell to more responsible owners. That’s the message these people are trying to get out. And these people have been working hard, under impossible conditions, for way too long. And it’s time for the people of Colorado to stand up and help these folks, if they care about local journalism, and they should.”

Plunkett is soft-spoken and precise with his words, which makes him a somewhat unlikely character to become the poster child for saving journalism in Denver, but most journalists would be similarly ill-suited for the role. That’s their nature, as Plunkett himself expressed.

Yet, as the signs carried by The Post journalists read, “Democracy Depends on Journalism.”

So there’s hope. There’s still a lot of great journalists in Denver, outside The Post.

And the Post’s cause is so noble that big civic-minded money may well flow its way. That’s what I’m waiting for, at least.