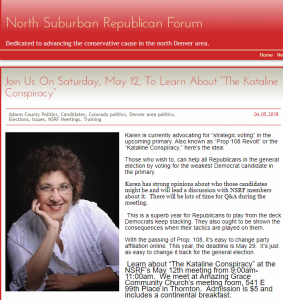 Conservative activist and talk radio host Karen Kataline is calling on fellow Republicans to change their voter registration and become unaffiliated, so they can vote for “the weakest Democrats in the primary.”

“It’s easy to change party affiliation online,” states the North Suburban Republican Forum’s website, laying out Kataline’s case prior to her recent appearance as a speaker there. “This year, the deadline is May 29. It’s just as easy to change it back [to Republican] for the general election.”

Over the past month, Kataline says she’s spoken to Republican audiences across the front range about this idea, broadly called Strategic Voting or Insincere Voting, including at the Arapahoe County Tea Party (a debate), Colorado Jewish Republicans, Denver Republican Breakfast, the Larimer County GOP breakfast, and the Jefferson County GOP Breakfast Club. She’s making her case on talk radio and online forums as well.

“There is no way to know if it’s working until we see the primary,” she said when asked if Republicans are accepting her idea, adding that she personally knows some Republicans who are going to do it. Others, she said, have told her they’d love to register as unaffiliated and vote Democratic, but they want to cast a ballot in the GOP primary. Some hate the idea.

“I present it as an option, as a choice, not as, ‘You’re a bad person if you don’t do this,'” said Kataline, who describes herself as an author and commentator. “What I wanted to do, and I think it’s succeeding, is to get people to think about strategy and thinking outside the box.”

Asked if the groups she’s addressed back her proposal, she said, “There’s never even an implied endorsement. We like to think of ourselves as the party of individualism. So it’s your choice what you want to do.”

Why is she advocating for it?

Obviously, she wants to elect Republicans, and she thinks this is a way to help do it. But she’s got other reasons too.

“I thought proposition 108 [Colorado’s voter-passed 2016 election law allowing unaffiliated voters to participate in primary elections] was terrible and should be repealed. Most Democrats pushed it, and some Republicans did, for reasons I don’t understand,” said Kataline. Before 2016, Republicans would have had to register as Democrats to vote in the Democratic primary.

“Democrats are mucking around with our election laws and our primaries,” she said. “It’s about time Democrats get some of their own medicine.”

Strategic Voting, which has been promoted elsewhere by partisans, is legal, but it’s deemed nefarious by critics, who see it as thwarting the will of partisan voters in a two-party system. The spirit of democracy is not to try to manipulate elections but to vote for the best candidate, they say.

Evidence that groups aligned with the Democratic Party in Colorado are employing this strategy, as Kataline is doing, could not be found, though Kataline says progressive groups have spent money on ads in GOP primaries in the past. But I reminded Kataline, whose podcast is called Spouting Off, that Republicans have been mucking around in Republican primaries. Ask Tom Tancredo and former New Jersey Gov. Chris Christy.

Kataline’s campaign has some backing in the conservative underworld, in the form of KNUS host Chuck Bonniwell, who’s argued that Republicans should consider the strategy in certain races. Co-host Julie Hayden says it’s something worth considering.

Under Colorado law, all unaffiliated voters will receive primary ballots for both the Republican and Democratic Parties. They can choose which ballot to return. If they send both back, their votes will not be counted. Unaffiliated voters also have the option of requesting a ballot from one party or the other from the Secretary of State. Registered Republicans and Democrats will receive the primary ballot of their party only.