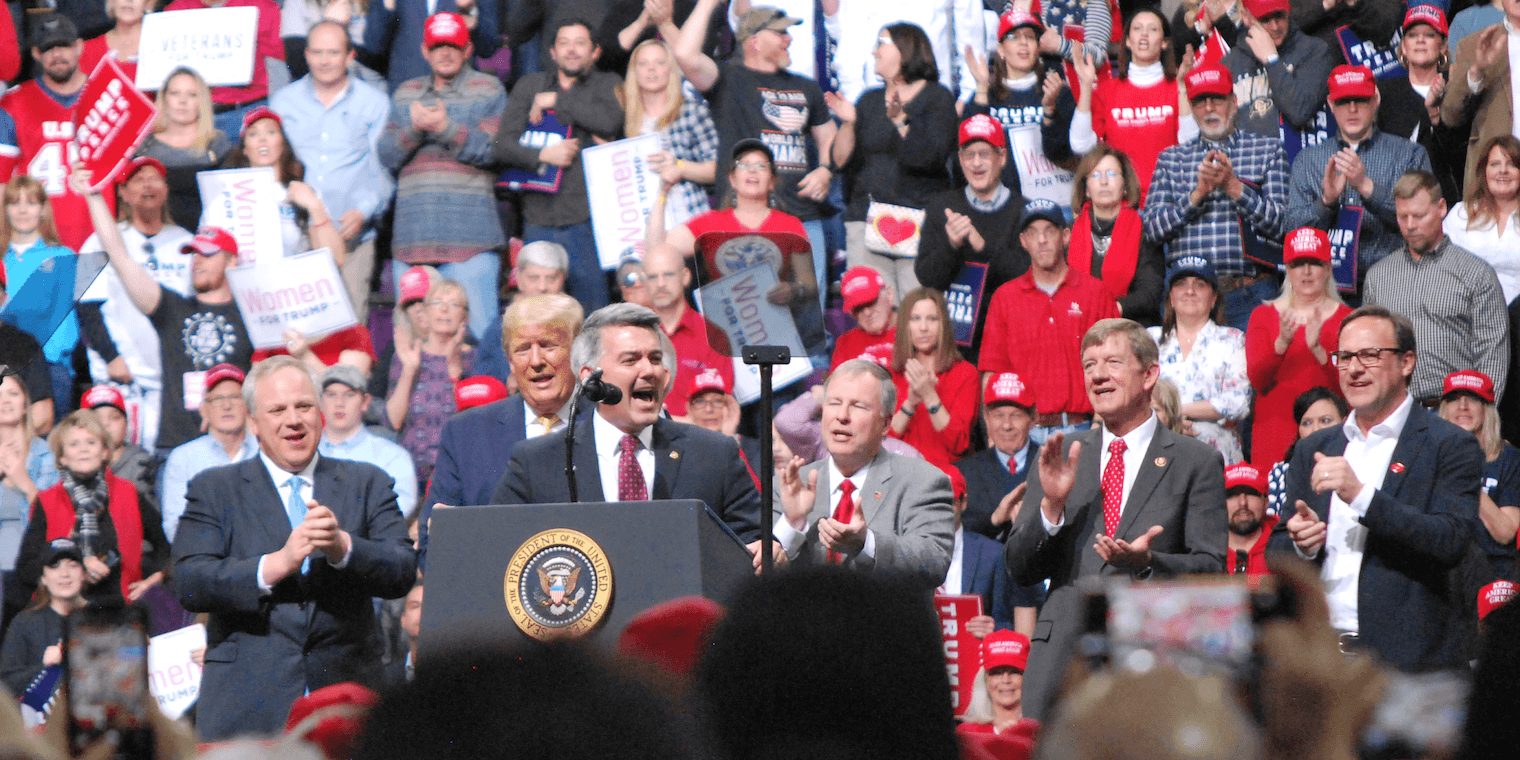 Even before the president took the stage, the noise level inside Colorado Springs’ Broadmoor Arena was deafening. When he finally emerged, clapping slowly as he walked out from behind the blue stage draping, the roar was deafening.

On the federal side, Republican Representatives Buck, Tipton and Lamborn all attended, along with the rally’s nominal guest of honor: U.S. Senator Cory Gardner. Gardner spoke twice over the course of the event, first as the main warm-up speech, and then again near the end of Trump’s speech, when he called upon the Congressmen and Gardner to join him on stage.

While Gardner stuck to his positive message of bringing federal dollars home to Colorado, President Trump served up the red meat, particularly on the subject of immigration. He devoted over five minutes to listing the supposed crimes of “dangerous criminal aliens” he claimed were released by various Colorado cities following the passage of last year’s law restricting interactions between Immigration Customs Enforcement (ICE) and and municipal law enforcement agencies.

“Right here in Colorado Springs, El Paso County officials defied the request of federal law enforcement and released a criminal alien arrested for robbery, assault and kidnapping- they released him straight into your community. These are the Democrats! Democrats think Colorado should be a haven for murderers, predators, kidnappers and felons in our country, that come in illegally. Republicans believe that Colorado should be a sanctuary for law-abiding Americans, not criminal aliens. If you want to shut down sanctuary cities and stop sanctuary states, if you want to protect your family and your loved ones, you must vote for Cory, vote for Trump and vote for the Republican party- we’re getting it done.”

Trump’s anecdote about Colorado Springs followed two similar claims about the heavily Democratic cities of Boulder and Denver, so it’s possible he was confused about El Paso County’s local political leaders. It would presumably come as a surprise to the entirely Republican board of El Paso County commissioners, as well as Republicans Sheriff Bill Elder and Mayor John Suthers (who previously served as Colorado’s Attorney General), that the President thinks they’re Democrats.

The Colorado Republican Party wasn’t the only group with a presence at the rally. Ten or so Proud Boys, designated a hate group by the Southern Poverty Poverty Law Center, wore matching letter jackets and flashed “OK” hand signs associated with white power while cheering on the speakers. In between speeches, they helped fire up the crowd, leading rowdy chants of “U-S-A!” Their enthusiasm didn’t last as long as the president’s, however; they filed out about twenty minutes before Trump finished speaking.

Focus on the Family founder James Dobson, who opened the rally with a prayer, later took in the action along with his wife from the VIP section.

Other attendees included supporters of both the Q-Anon conspiracy and the “Three Percenters”extremist militia group.