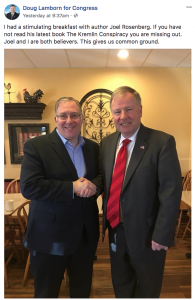 On April 2 Congressman Doug Lamborn (R – Colorado Springs) posted this picture of himself shaking hands with novelist Joel Rosenberg, saying “I had a stimulating breakfast with author Joel Rosenberg. If you have not read his latest book The Kremlin Conspiracy you are missing out. Joel and I are both believers. This gives us common ground.”

Rosenberg is a Republican operative turned terrorism and Biblical prophecy novelist.  He’s also Fox News regular who insists his books aren’t merely works of fiction, but warnings about what may really happen in the near future. He believes that the Rapture —the Biblical end of the world— will take place within his lifetime. From the “Prophecy Q&A” page of Rosenberg’s website:

“We can, therefore, have confidence that Jesus’ return is closer than ever. What’s more, we can be confident that our generation will not pass away before we see this remarkable event occur. No other generation in history has been able to say that, but we now can.”

Rosenberg also believes that “The Bible makes it clear that Iran will join forces with Russia and attack Israel.”

These are some very specific beliefs which he and anyone else, including Doug Lamborn, are free to embrace and espouse. However, most people don’t have Congressman Lamborn’s responsibilities. He sits on the House Armed Services Committee, which “retains exclusive jurisdiction for defense policy generally, ongoing military operations, the organization and reform of the Department of Defense and Department of Energy…”

If Congressman Lamborn indeed shares Rosenberg’s belief that the end of the world is only a few decades away, or that Iran and Russia are planning to attack one of our country’s most important allies, how can he be expected not to let those beliefs affect his strategic decision-making?

Reached by phone, a representative for the Congressman promised to call back with an additional comment but has not done so as of publication.

On April 3 Republican gubernatorial candidate Victor Mitchell shared his new ad, “Don’t California our Colorado.” Here’s the thing- Victor Mitchell himself is a California transplant who moved to Colorado after living in California for over a decade. From a Westword interview he gave last summer:

How I got to Colorado is a little bit different as well. I built a very successful wireless retail business that was sold to Verizon Wireless in 1995. I had brought them an idea to start a different kind of telecommunication company, and they insisted on me signing a non-compete agreement. But AT&T had heard about my story and some of the success we’d had in California, and recruited us to come to Colorado.