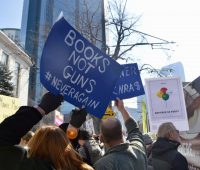 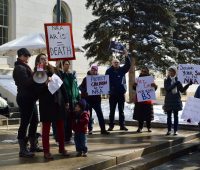 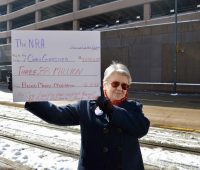 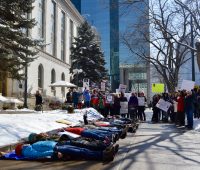 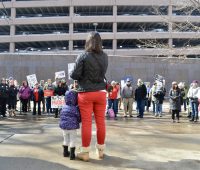 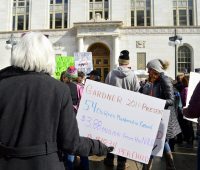 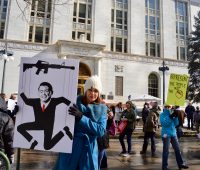 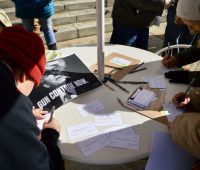 Nearly a hundred people showed up to the office of U.S. Sen. Cory Gardner (R-CO) today to protest his lack of action on gun violence in the wake of the deadly school shooting in Parkland, FL, where 17 students and teachers were murdered.

Gardner, who is the senator with the fifth highest amount in donations from the National Rifle Association (NRA) at $3.88 million, said on Twitter following the shooting that claimed 17 lives, “I am heartbroken for the students and family of those involved in this horrible tragedy and I’m praying for our first responders as they act swiftly to contain the situation.”

But Colorado moms said they’re sick and tired of Gardner’s thoughts and prayers, which never result in any actions from the senator to shield their children from gun violence.

“We know these politicians have no intentions of doing anything beyond being heartbroken on Twitter,” said Katie Farnan of Indivisible Front Range Resistance, a citizen-led group of activists who have for months maintained pressure on Gardner.

Farnan addressed the crowd while holding the hand of her child, and expressed concern for the future of the nation’s children.

“As a Colorado mother, Senator Gardner, this epidemic is breaking over the heads of our children,” said Farnan. “You’re putting my children in the crossfire.”

Cindy Sandhu of Indivisible Highlands Ranch also had her child by her side as she addressed the crowd.

Sandhu explained that her eight-year-old daughter was upset following an active shooter drill at school where she was told her light-up shoes would identify her to a shooter.

“Our children are mad, and they have a right to be mad,” Sandhu said. “It’s disgusting Senator Gardner. We are watching. And we will remember in 2020.”

Atendees made out checks in the amount of “thoughts and prayers” to the senator.

Both of the pro-gun measures were defeated by Democrats this week.

As the rally drew to a close, 17 people staged a lie in to symbolize the lives that were claimed at Marjory Stoneman Douglas high school as the names of the victims were read over a loudspeaker.