After Weinstein, a state lawmaker is reconsidering Pence’s rule about being alone with women. He’s wrong.

by
Madeleine Schmidt
posted on
November 17, 2017

That’s the gist of a recent Facebook post from state Rep. Tim Leonard, a Republican from Evergreen, in which he says he wonders “if there is some wisdom to VP Mike Pence’s rule to not be in a situation of eating a meal alone with another woman other than his wife.” 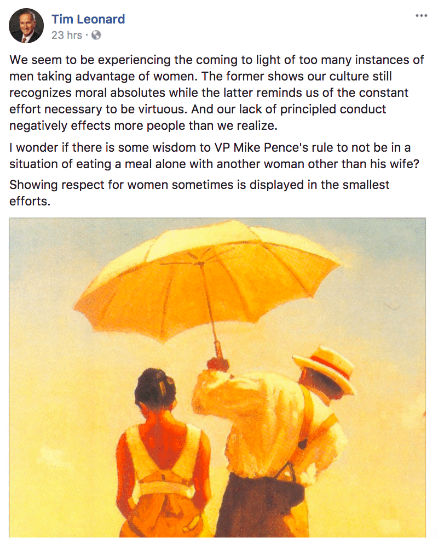 Leonard is referencing reports that Vice President Mike Pence won’t dine alone with women who are not his wife, or attend events where alcohol is present if his wife isn’t there with him.

This rule, which more generally advises men against spending time alone with women, can be traced back to famous evangelist Billy Graham, who implemented it for himself and suggested its use for others so as to avoid even the appearance of wrongdoing.

That approach carries some serious setbacks for women.

First, rather than ensuring professional relationships between men and women, it puts women at a professional disadvantage by cutting off access to potentially powerful people who could help advance their careers, and restricting the ways in which they can work with their professional peers.

It’s also steeped in heteronormativity, propping up a tired and problematic view of men and women: Women as temptresses who must be hidden away, and men as lustful beings who fundamentally lack impulse control.

And applying the Graham/Pence guidelines as a solution for nonconsensual sexual contact, rather than just adultery, implies something far more sinister – that the expected outcome of a private interaction between a man and a woman is sexual assault, and it’s not worth putting the work into changing the culture that allows that expectation.

Throwing in the towel and accepting pervasive sexual misconduct as the status quo allows predatory men to keep their seats at the table while pushing women all the way into the other room, implying that the existence of women in the same spaces as men is the problem that needs solving, rather than the men who think women are up for grabs. And this “solution” just adds to the many ways in which women are continually punished for the violent acts committed against them by perpetrators, peers, the media, and a justice system that rarely delivers justice to the victims of these crimes.

Furthermore, the pervasiveness of sexual abuse is compounded by the fact that women don’t have equal influence in the spaces where it so often occurs, whether it be in the entertainment industry or politics. Pushing women farther to the edges of those spaces only reinforces the power dynamics and social structure that allows the problem to persist.

In his post, Leonard writes that “showing respect for women sometimes is displayed in the smallest of actions.” But this is about much more than respecting women from afar – it’s about allowing women to exist peacefully in the same spaces as men while respecting them as equals. There’s no small action, as Leonard would apparently like to believe, that will solve that problem.