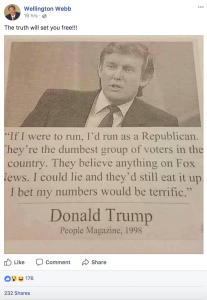 “If I were to run, I’d run as a Republican. They’re the dumbest group of voters in the country. They believe anything on Fox News. I could lie and they’d still eat it up. I bet my numbers would be terrific.”

Webb not only removed the post, which had received hundreds of “likes” and “shares,” but he left a note on his Facebook page copping to his mistake and apologizing.

What more could you want from a community leader?

For this, I officially dub him a Warrior Against the Fact-Free World.

It’s great to remove fake news in silence, but Webb went further by acknowledging his error and thus showed by his example how we can all fight fake news. Anyone can make a mistake and post fake news, no matter how hard we try not to. Webb’s action encourages others to act responsibly if they’re in the same boat.

Contrast how Webb handled the situation with the many Colorado officials who refuse to remove fake news, defined as social-media post that looks like news and has been proven false by Factcheck.org, Politifact, Snopes or a credible news outlet.

On the positive side, a growing number of officials, from former Republican Congressman Tom Tancredo on the right to Webb on the left, have readily removed fake-news, once they become aware of the rot on their social-media feeds. Yay for that.