by
Madeleine Schmidt
posted on
November 8, 2017

Multiple former and current Republican state lawmakers fell for fake news reports that claimed the shooter who killed 26 people inside a Texas church Sunday was connected to Antifa.

Woods recommended that the Department of Justice declare Antifa a terrorist organization as a result of the fake news. 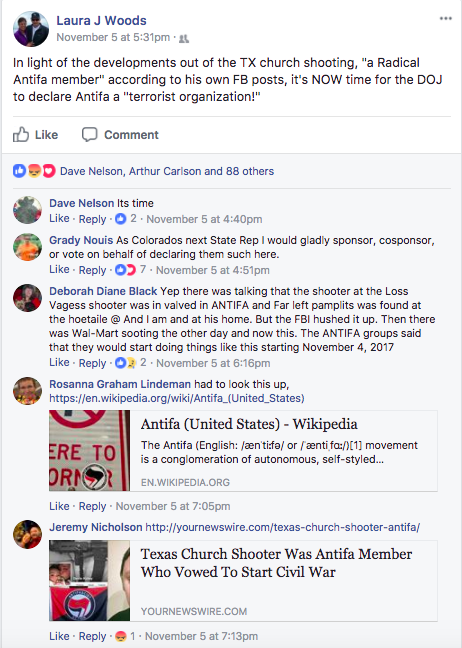 Woods appears to be referencing the news story provided in the comment section, which claims shooter Devin Kelley carried an Antifa flag and shouted “this is a communist revolution” before opening fire on the churchgoers. It also claims Kelley was one of two shooters and “vowed to start a civil war by targeting white conservative churches and causing anarchy in the United States.”

None of those details have been reported by reputable news outlets, or confirmed by law enforcement, and the story has been designated as false by Politifact, FactCheck.Org, and Snopes. Authorities said the shooting appeared to be motivated by a family dispute between Kelley and one of his in-laws, and don’t believe the incident was politically or racially motivated.

Former state Sen. Shawn Mitchell also referred to the shooter as an Antifa member in a Facebook post, which was “liked” by state Reps. Jon Becker (R-Fort Morgan) and Phil Covarrubias (R-Brighton). 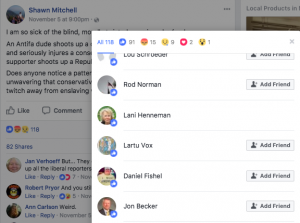 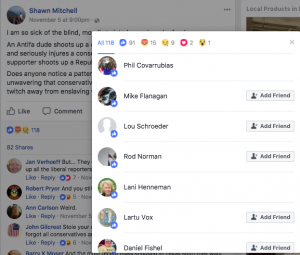