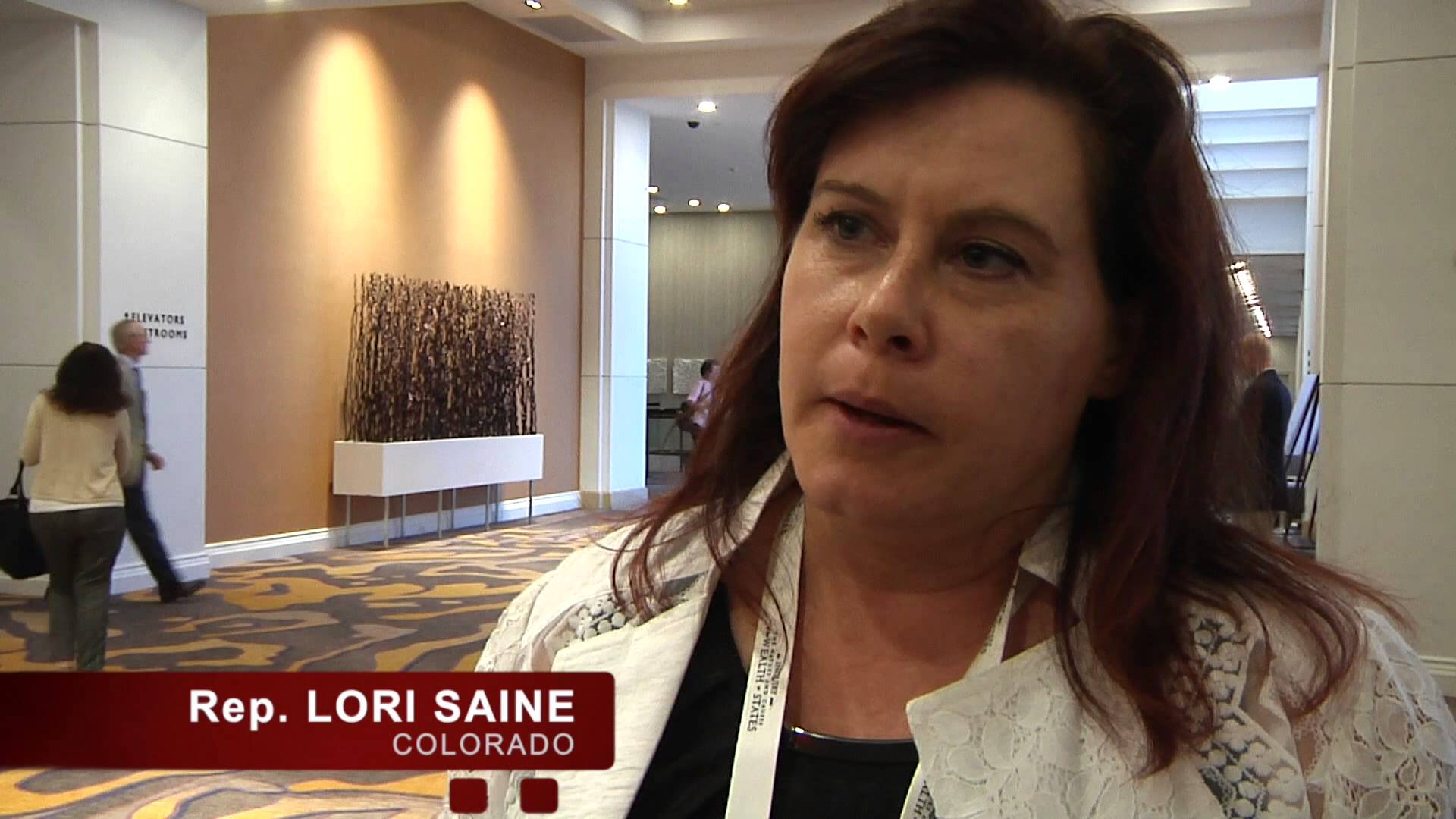 Colorado State Rep. Lori Saine, a Republican from Firestone, shared an article on Facebook from the American College of Pediatricians (ACPeds) that condemns what it refers to as “gender ideology” and claims that the acceptance of transgender people amounts to child abuse.

“In recent news, during the first week of school a ‘first grader sees a classmate, calls him by the name she knew him last year and the boy reports it to the teacher,'” commented Saine on Facebook. “Then the girl is called into the principal’s office to be investigated for bullying.” 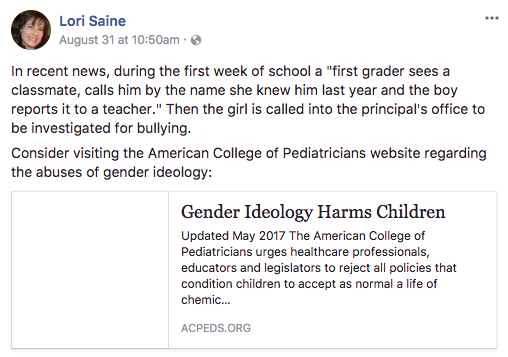 Saine is apparently referring to a Fox News opinion article about an incident at a California school where a child used the wrong pronoun when referring to a classmate. After looking into the incident to make sure there was no bullying involved, the school determined that it was an honest mistake. According to Fox News, that process took about an hour.

The story was disseminated throughout the right-wing media, starting with Fox News before cropping up on Breitbart and other alt-right media outlets, which framed it as evidence that LGBTQ people, and in this case, transgender kids, are the real bullies here.

Todd Starnes, the Fox News contributor who wrote the op-ed, called the incident “an example of how schools have become indoctrination grounds for the LGBT agenda.”

Saine used the story as a jumping off point to promote the idea of “abusive gender ideology,” sharing an article from ACPeds that claims accepting transgender people as normal poses a threat to children:

“Conditioning children into believing a lifetime of chemical and surgical impersonation of the opposite sex is normal and healthful is child abuse. Endorsing gender discordance as normal via public education and legal policies will confuse children and parents, leading more children to present to “gender clinics” where they will be given puberty-blocking drugs. This, in turn, virtually ensures they will “choose” a lifetime of carcinogenic and otherwise toxic cross-sex hormones, and likely consider unnecessary surgical mutilation of their healthy body parts as young adults.”

Although official sounding, ACPeds is a small anti-LGBTQ fringe group consisting of a few hundred members, and is not to be confused with the widely respected American Academy of Pediatrics (AAP), which has 60,000 members and is the largest pediatric organization in the country. ACPeds was started in 2002 by a group of anti-LGBTQ physicians who broke away from the AAP after it issued a statement in support of adoption and foster parenting by same-sex couples. The Southern Poverty Law Center (SPLC) classifies ACPeds as a hate group for “propagating damaging falsehoods about LGBT people,” including linking homosexuality to pedophilia.

The term “gender ideology” also warrants explanation. The term has cropped up worldwide in conservative circles to refer to the idea of gender as something separate from biological sex that can be chosen in accordance with what one perceives as their identity.

It’s a straw man used exclusively by the anti-LGBTQ advocates who oppose its premise, and provides an alternate route around language that is overtly homophobic or transphobic.

Furthermore, those who use it tend to attempt more scientific arguments as to why “gender ideology” is flawed by claiming it threatens the natural order of things and is at odds with biological facts. These arguments oversimplify the issues and cleanly package anti-LGBTQ ideas in a way that’s easily digestible for those susceptible to buying into them.

Quartz published an extensive report explaining how the term has become an effective communication tool across the globe:

“Without being familiar with the more nuanced views of gender developed by the intellectuals whom conservatives are criticizing, it’s easy to take the distorted interpretation at face value. That’s made it possible for conservative groups to convince followers that policies designed to instill basic human rights—a clear state jurisdiction—are really an imposition of a fringe ideology that the state has no business institutionalizing. In other words, the very people acting on their religious beliefs have successfully framed gender issues as a religion itself.”

To summarize, the notion of gender fluidity is painted as nothing more than an ideology, as opposed to biological sex, which is held up as an objective scientific fact.

In attempting to make scientific arguments against the acceptance of transgender people, groups like ACPeds often use shaky science. Take their claim that most prepubescent transgender children change their minds about being transgender after hitting puberty, for example. That claim is based on a 1987 study that researchers have found to be flawed.

There is, however, sound scientific evidence that administering hormones results in improved mental health and general well-being for transgender youth, and that transgender children who feel supported in their identities have developmentally normal rates of anxiety, depression, and self-worth.

Tragically, the science also shows that transgender individuals who aren’t accepted by their families have a suicide rate that is 20 percent higher than that of the rest of the population.

Saine received a lifetime score of zero on LGBTQ advocacy organization One Colorado’s legislative scorecard, meaning she has voted in favor of LGBTQ rights zero percent of the time throughout her legislative career.