Protesters to Gardner: You advocated for bipartisanship and an open process two weeks ago

by
Madeleine Schmidt
posted on
September 22, 2017

Hundreds of protesters gathered at Denver’s Skyline Park against the most recent iteration of the GOP’s Obamacare replacement Friday.

Named after Republican Senators Lindsay Graham and Bill Cassidy, the Graham-Cassidy bill would cost Colorado between $800 million and $1 billion in federal health care dollars and put those with preexisting conditions in danger of losing coverage.

“It seems like we’ve done this before,” said the Colorado Cross-Disability Coalition’s Julie Reskin, referencing the numerous rallies and protests activists have organized in Denver and beyond over the past few months as Republicans in Congress attempt to pass bill after bill to strip millions of Americans of health care coverage.

The focus of this particular rally? Hold Gardner to his word, specifically the words he spoke to constituents at a Sept. 8 town hall meeting in Grand Junction. Responding to a constituent who criticized the GOP’s secretive approach to pushing health care legislation, Gardner said “several months ago I talked about the need for this to be bipartisan, talked about the need for hearings and extended time,” and that “I hope people learn that [the healthcare debate] needs to be open.” 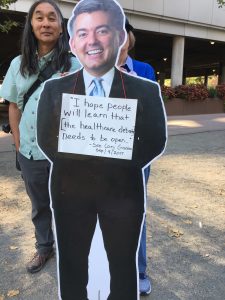 As the GOP once again attempts to pass a health care bill with no semblance of bipartisanship, hearings, or even enough time for the Congressional Budget Office to determine how many will lose coverage as a result of the legislation, Colorado activists are attempting to remind Gardner of his remarks. They even brought along a visual aid in the form of the a cardboard cut-out of the senator with his words posted on his chest.

Rally-goers also scoffed at Gardner’s recent remark to reporters that he was still seeking “more information” on the bill and hadn’t yet decided whether or not to support it.

Katie Kelly, an organizer with Indivisible Front Range Resistance, held up a sign that depicted a Google search of “MORE INFO: ‘GRAHAM-CASSIDY’ ACA REPEAL”, pointing out that “it’s not hard to find information about this bill.” 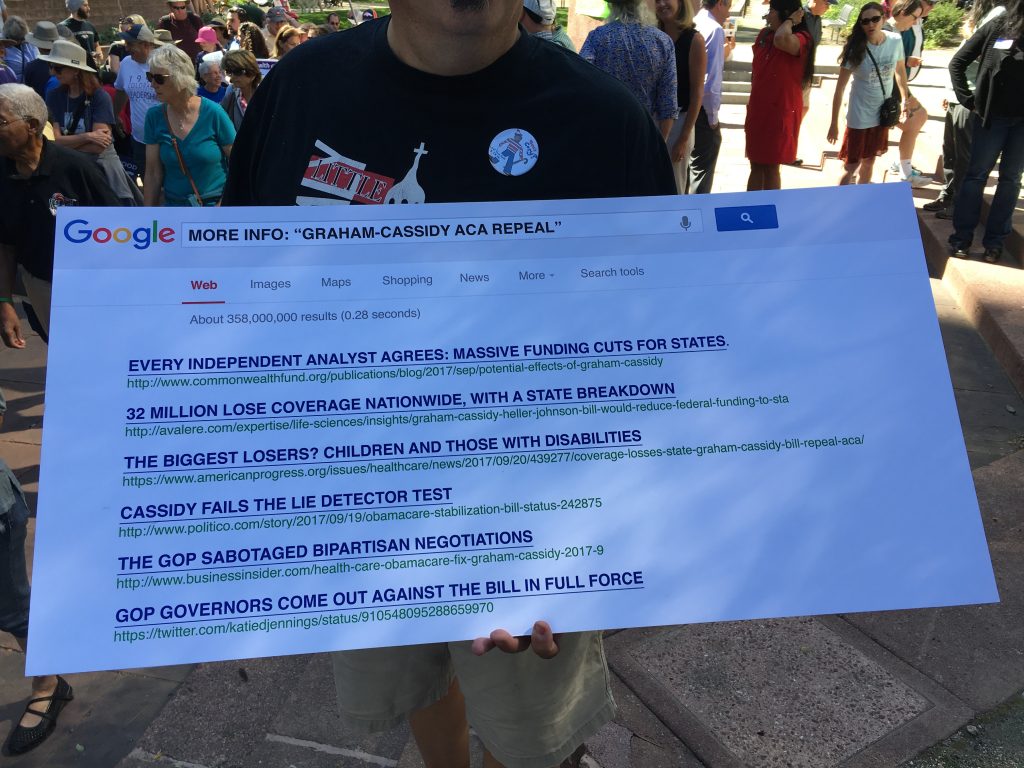 The New York Times in a report today quoted Gardner as saying at a meeting with Republican senators that “donors are furious” with them for failing to repeal the Affordable Care Act, and that campaign fundraising has stuttered as a result. Although the report doesn’t say that Gardner specifically pushed for the Graham-Cassidy bill at the meeting, it does explain the motivation behind the GOP’s last ditch effort at repeal and replace.

Dr. David Keller, a pediatrician, also spoke at the rally. He harshly criticized the Graham-Cassidy bill, calling it “a repeal of Medicaid” based on the drastic cuts it proposes for the federal program that provides health coverage for children, elderly, disabled, and other poor people.

Following the rally, the crowd of more than a hundred marched to Gardner’s office in the U.S. Customs House at 721 19th St to deliver a pledge of accountability that cites the senator’s words to his constituents in Grand Junction.

September 30 is the deadline for Republican senators to pass a repeal bill using the “budget reconciliation” process, which allows the bill to move forward without any Democratic votes.