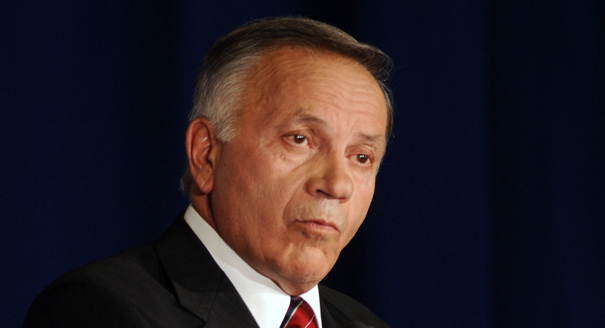 Former Republican Congressman Tom Tancredo is considering a run for governor because he’s “bored” and mad at Republicans for attacking him last time he ran.

That’s the opinion of U.S. Rep. Mike Coffman (R-CO), as explained in a radio interview yesterday.

“I think [Tancredo] misses the spotlight,” Coffman told KHOW guest host Krista Kafer Tuesday. “He really thrives on the attention. And I think he’s bored. I mean, this is cheap entertainment for him. I think it will be awfully hard on the Republican Party.”

Harsh stuff, but it didn’t seem to faze Tank, who joked, “If that’s the best he can come up with, I’ve got nothing to worry about from Mike Coffman.”

“If Mike Coffman was living up to the promises he made me before he was elected, and the people who are running for governor would say the things I believe need to be said, I wouldn’t be thinking about running,” Tancredo told me.

“The idea that I’m bored, well, maybe it’s because he doesn’t have grandchildren, and he doesn’t know how much time they take up with baseball games,” said Tancredo. “It’s constant. Baseball, hockey and basketball. Believe me, I’m not bored.”

A Tancredo’s campaign could “give us a Democratic governor, and I don’t think [Tancredo] cares,” said Coffman on the radio.

If that’s true, Coffman must think a lot of Republicans don’t care or are deluding themselves, because Coffman believes Tancredo can win the GOP gubernatorial primary next year.

Coffman, who once called Tancredo his hero, said on air that if Tancredo can “bring a certain element out” to vote in the crowded Republican primary, Tancredo “may just do it.”

“A certain element? I don’t doubt that to him, that means the troglodytes,” Tancredo laughed in response, adding that he agrees he can win the GOP primary, especially in a crowded field, due to the loyalty of his voters. And in the general, he thinks he’d get serious support from unaffiliated voters.

On the radio, Coffman called it “just bizarre” that Tancredo “came back to register as a Republican so he could run for Governor.”

In his radio interview, Coffman seemed annoyed with Tancredo’s appearance Sunday on “Balance of Power,” a 9News interview program, during which Tancredo said he was on the verge of winning the 2014 GOP primary race until deep-pocketed Republicans launched a stealth ad campaign against him, clearing the way for former Congressman Bob Beauprez, the establishment favorite, to win the nominiation and ultimately lose to Democratic Gov. John Hickenlooper.

“Look at what happened last time around, Republicans,” Tancredo told 9News’ Brandon Rittiman. “The Republican Governors Association, [led] by a guy named [New Jersey Governor] Chris Christie, laundered, and I mean laundered, close to $250,000 to attack me in two counties especially, El Paso and up in Grand Junction. It worked, and I went from first to second place. And the first place guy was Bob Beauprez.”

Now, Republicans, remember that… I was doing better than [Beauprez] was.. Could you be a more milquetoast, more squishy, Republican than Bob Beauprez.”

This might explain why Coffman, who doesn’t return my calls, said on air that Tancredo’s exploration of a gubernatorial campaign is really “about retribution.”

Tancredo, who recently called for a Republican to depose Coffman in a primary, told me he’d like the current Republican gubernatorial candidates to “be a little louder” on the issues, including his signature issue, immigration. Tancredo said “a lot of them want to run as Republican-lite.”

When he announced his possible gubernatorial bid last month, Tancredo told CoPolitics.com he was infuriated that Republicans were silent about cancellation of a conference in Colorado Springs organized by a white nationalist organization with ties to the deadly demonstration in Charlottesville.