‘They Are Putting Litter Boxes in Schools for People Who Identify As Cats,’ Says Boebert. ‘Not True,’ Responds Durango School District 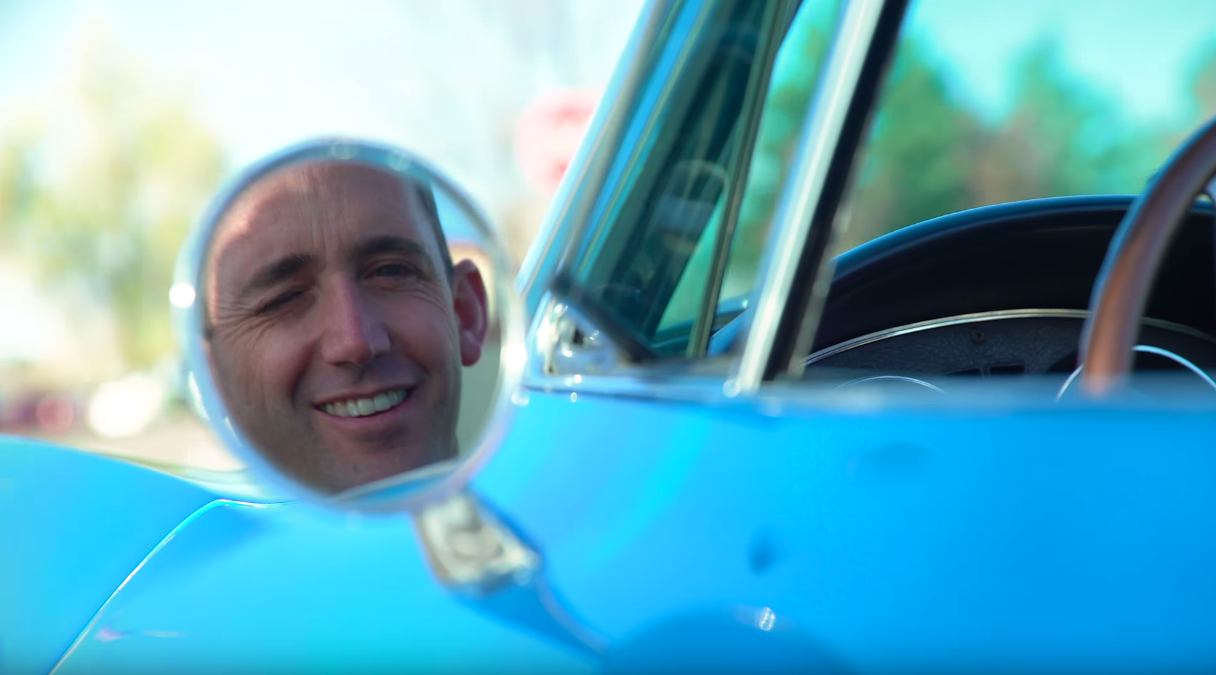 UPDATE 9/12/2017: This post was updated below to include a response from Jeff Hunt, director of the Centennial Institute. Among other things, he writes, “It is a strategic objective of Colorado Christian University to:  Impact our culture in support of traditional family values, sanctity of life, compassion for the poor, Biblical view of human nature, limited government, personal freedom, free markets, natural law, original intent of the Constitution and Western civilization.” See his entire response below.

You might remember Jeff Hunt, the director of Colorado Christian University’s conservative think tank the Centennial Institute, from the silly music video he “starred” in with Cory Gardner to promote the Western Conservative Summit. It was the easily mocked video that launched a thousand gifs. Mr. Hunt seemed particularly enamored of material wealth in that video, to the point where he posed with an extremely expensive car.

Recently Mr. Hunt posted a proclamation on Facebook announcing the Colorado Christian University he helps run was signing on to the so-called Nashville Statement.

The Nashville Statement is a re-affirmation of bigotry against LGBTQ citizens in the wake of Trump’s election, and proof that many religious schools and churches are still locked into the amber of bigotry around the issue of sexual orientation. 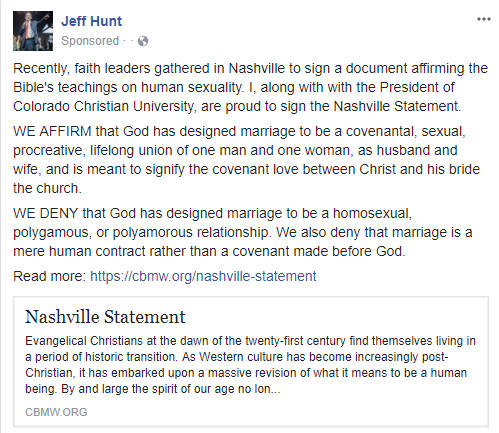 You can read the entire statement here.

There are a couple of things to note about it. First is the unambiguous rejection of civil rights for LGBTQ Americans. Second is the fact that there is scant quoting of scripture to bolster the tenets set forth in the statement. This is likely the result of a dearth of biblical support for bigotry surrounding sexual orientation. Jesus, it turns out, had very little to say about homosexuality and nothing to say about transgenderism.

Why, then, would a Christian school risk its reputation in order to sign on to a statement promoting bigotry?

In my view, it’s because CCU and its leadership are “Christians” in name only.

A quick perusal of Jeff Hunt’s twitter feed makes something very clear: the set of beliefs and prejudices he is obsessed with bear little to no relationship with the primary focus of Jesus’ teachings. Instead, they are fairly standard hard-right political opinions aligned with modern conservatism. In fact, over the last month, Mr. Hunt has tweeted dozens of times about the “scourge” of legalized cannabis but zero times about feeding the poor, healing the sick, or leaving judgment to God—the primary tenets set forth in the Sermon on the Mount.

In fact, CCU seems much less a religious institution than a vehicle for Mr. Hunt’s personal politics, which seem to fit perfectly into the Republican mold: hypocritical calls for smaller government, racial resentment, and a Taliban-esque desire to insert their prejudices into the personal choices of citizens, whether that be cannabis consumption, sexual expression, or reproductive choice.

I call on Jeff Hunt and CCU to rescind their endorsement of the bigoted Nashville Statement and renew their faith by promoting the things Jesus actually preached about. Rather than yearning for the days of yore when LGBTQ Americans were routinely harassed, beaten, and even killed by bigots who think like Mr. Hunt, they should be promoting unconditional love and tolerance. Given high rates of suicide among LGTBQ youth, the lives of the many LGBTQ students who attend their university might even depend on it.

Update: Mr. Hunt has responded to this article on Facebook:

A reporter in Colorado is angry that Colorado Christian University leaders signed a statement affirming the Biblical definition of marriage.

I would point anyone who doubts our position on marriage to review Colorado Christian University’s strategic objectives: http://www.ccu.edu/strategicobjectives/

It is a strategic objective of Colorado Christian University to:
Impact our culture in support of traditional family values, sanctity of life, compassion for the poor, Biblical view of human nature, limited government, personal freedom, free markets, natural law, original intent of the Constitution and Western civilization.

It is a strategic objective of Colorado Christian University to:
Teach students to trust the Bible, live holy lives and be evangelists.

We are not ashamed of the Gospel.

Interesting: In his response, which he summarizes as not being “ashamed of the Gospel”, he lists things like “limited government, free markets”, and “original intent of the Constitution” as though they are biblical principles. In fact, they are hard right political dogmas and not “the Gospel”. He also slips “personal freedom” into the list at the same time his organization seeks to limit the personal freedom of LGBTQ citizens and people who consume cannabis. Mr. Hunt also failed to address how his anti-LGBTQ stance might affect vulnerable students at his school.

In summary, my response is to reiterate that a review of what Mr. Hunt tweets about is more indicative of what he cares about than a laundry-list of objectives on his website. He tweeted dozens of times about a desire to restrict cannabis consumption, for instance. How does that jibe with the “personal freedom” objective? In light of the following chart detailing the epidemic of opioid abuse and death, why does Mr. Hunt view cannabis (nobody overdoses on cannabis) as his gravest concern? 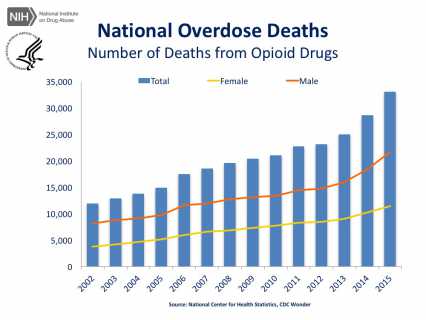 The short answer is this: Mr. Hunt is much more a hard-right, dogmatic, political operative than a man of God.