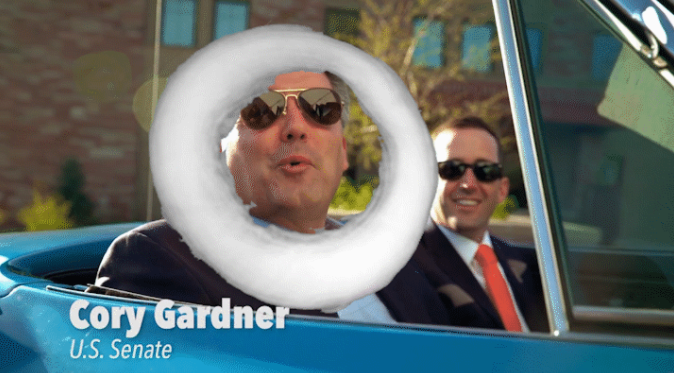 If you haven’t seen it, the GOP and Jeff Hunt, the anti-LGBT bigot who runs the Centennial Institute these days, made a dance video to promote the 2017 Western Conservative Summit. That’s the yearly meeting where “conservatives” get together and preach to the choir about their “economic anxiety” and promote their irrational fear of the “other”.

U.S. Sen. Cory Gardner is in the opening shot, riding around in a luxury automobile with a bigot (hey, it’s easier than defending his policy choices to those pesky constituents) trying fruitlessly to act cool. Not sure where they’re going, but I don’t think that car would fit through the eye of the needle so it’s surely not heaven.

The production values are actually pretty good, so on first view, it seems pretty slick and cute. Of course, the internet (and myself) had a field day and started pulling gifs from it, a few of which I’ve pasted below (some, but not all of these were my creations).

First up is supposed man of God Jeff Hunt, who directs the Centennial Institute, who seems to eschew Jesus’ admonitions to not worship material goods:

Up next is Colorado’s State Treasurer Walker Stapleton. Alan Franklin of ProgressNow Colorado made his little dance into a joke about his DUI incident:

Another gif by Franklin highlights the little dance that Gardner and Hunt did. Apparently the crack crew that made the video didn’t realize they were making their letters backwards, so Franklin turned it into a joke:

The problem with silly videos and trying to act cool is that anyone can use them to make you look silly. Here’s Cory Gardner blowing smoke in his constituent’s faces:

High-fiving the follower of Jesus over taking healthcare away from his constituents:

Of course, George Brauchler is running for governor of Colorado. On twitter he lamented that this little dance was much worse than he remembered:

The crazy look in Gardner’s eye when he was trying to act cool reminded me of one of the first viral gifs to ever hit the internet:

This gif of Buck actually kinda makes him look as cool as he could ever look, so I’ve left it in for the sake of balance:

In the end, the moral of the story might be that even if your silly dance video has some good production quality, for your political opponents, it might be the gif that keeps on giving!