A much anticipated “town hall” meeting with U.S. Sen. Cory Gardner (R-CO) and other politicians, scheduled to take place in Durango tomorrow, may include just five minutes for questions from constituents, according to one of the event moderators, La Plata County Commissioner Brad Blake.

“There’s not going to be much time,” Blake told the Colorado Times Recorder today. “I think people are going to be deeply disappointed.”

Blake explained that U.S. Sens. Gardner and Michael Bennet (D-CO), U.S. Rep. Scott Tipton (R-CO) and Gov. John Hickenlooper are slated to speak for 10-12 minutes each. And the event will last 45 minutes.

And it appears that the event cannot be lengthened.

“The unfortunate thing is, the governor has a really tight turnaround time frame,” said Blake. “So do the senators. They’ve got to catch planes to get to other areas. So it’s pretty discouraging that they are not going to be able to spend more time to answer questions.”

Friday’s event follows a meeting with the Environmental Protection Agency (EPA) and a tour of the Gold King Mine, the site of 2015’s disastrous wastewater spill that contaminated the Animas River.

But the questions will not be restricted, Blake said.

“The public will be permitted to ask a broad range of questions,” Blake said. “I would imagine there will be a good number of questions that do not relate to the mine or the mine spill.”

Gathering a “big deal” for Durango.

“This is the first time in my recollection that we’ve had the governor and both senators and the congressman in one place in Durango,” Durango’s Mayor Dick White, the co-moderator of the event, told the Colorado Times Recorder. “And so this is a very big deal for us. I’m sure a lot of people will come out. There will be lots of questions, and not a whole lot of time to answer them. So I think we’re going to have to be pretty brutal about keeping people to asking short questions.”

Gardner touted his appearance at Durango’s town hall meeting today, which will be his first in 494 days. His constituents, some toting cardboard cutouts of the senator, have been demanding for months that he answer questions at a public meeting.

The announcement comes barely 24 hours before the town hall is slated to take place in one of the most isolated regions of the state, likely preventing many of the progressive activists who have focused their attention on Gardner from being able to attend the event.

Progressives lambaste Gardner for calling the event a “town hall”

Progressive resistance groups Indivisible Denver and Indivisible Front Range Resistance in a joint statement called it “shamefully inaccurate” and an insult to Gardner’s constituents to call the event a town hall given the meager time allotted for constituent questions, in addition to other factors.

Here’s the full statement, as provided to the Colorado Times Recorder: 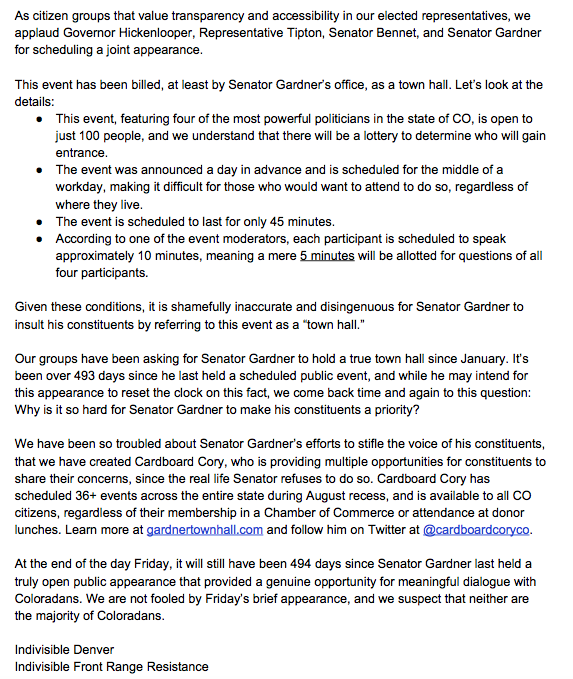 Madeleine Schmidt contributed to this article.

Updated 7:11 p.m. to include statement from local Indivisible groups.