Coloradans know it’s hard to get any face time with U.S. Sen. Cory Gardner (R-CO), who hasn’t held a single town-hall meeting this year. It’s certainly not for lack of trying, considering his constituents routinely show up at his office to try and make their voices heard, especially when it comes to incredibly important issues like health care.

They’ve even resorted to directing their questions toward a cardboard cutout.

But as I’ve reported before, his staff claims to be too busy to even give a second meeting to constituents whose questions were left unanswered and their time cut short.

When it comes to train horn noise, however, he’s all ears. Take a look at his latest Facebook update on his busy busy life as a Senator. 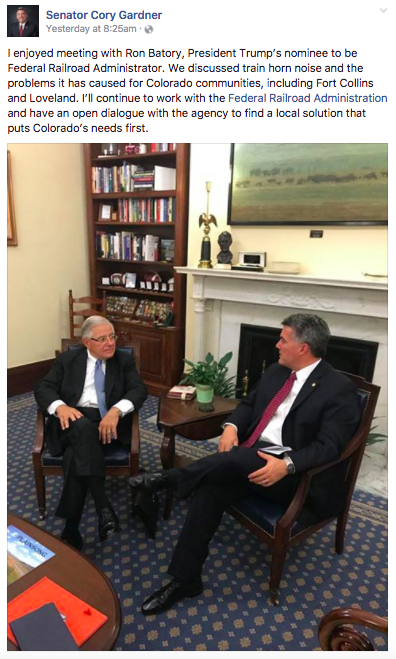 The possibility of millions of American’s losing their health care? Eh. Train horn noise? Better take a look at that.

Here’s what some commenters had to say about it: