Joshua Hosler, the vice chair of the Republican party in El Paso County, recently “loved” this post on Facebook: 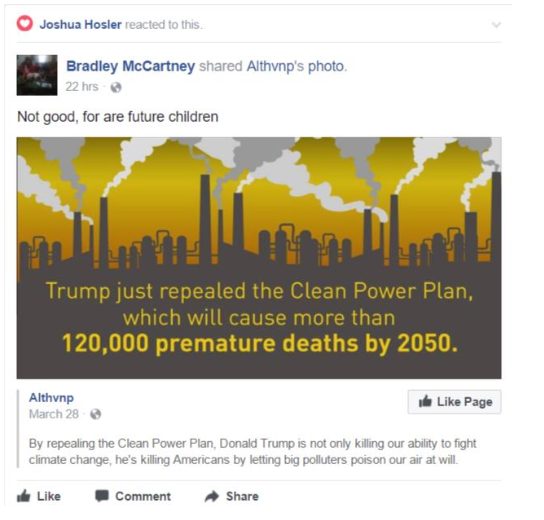 Yes, Hosler apparently loves that Trump’s repeal of the Clean Power Plan, the Obama Administration policy to address climate change and reduce pollution, will cause a major uptick in premature deaths caused by air pollution.

And, in fact, this post vastly understates the impact of repealing the Clean Power Plan, which will actually result in approximately 120,000 premature deaths in 2050 alone, according to the Energy Innovation analysis reported by Forbes. The same analysis found that the repeal will cost the U.S. $600 billion in economy-wide costs by 2050.

But if you’ve been following Charles Buchanan’s “Tales from the Fever Swamp,” which highlights misinformation and bigotry that circulates on the social media accounts of Colorado politicians, this shouldn’t come as a surprise.

Last week, Hosler “loved” another post about Trump insulting our NATO allies. He also has a history of sharing misinformation.

Loving an impending national health crisis, however, feels like a new low for the party official in Colorado.