I had to do a double-take when I saw this. Joshua Hosler “hearting” a headline that reads: “President Trump basically insulted all our allies to their faces.” 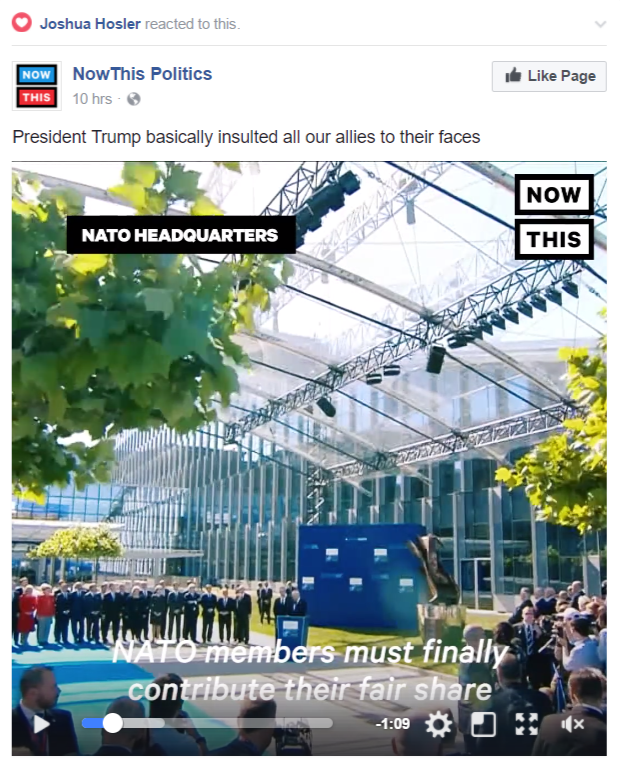 Does Hosler know that NATO was formed after WWII to combat the spread of communism and keep the Soviet Union in check? Considering conservative enmity toward communism, you would think that Mr. Hosler would be an advocate for the North Atlantic Treaty Organization.

After all, we’ve enjoyed almost 70 years of relative peace in the USA on the strength of this alliance. Does he know that after we were attacked on 9-11, Article Five, which provides for our common defense, was invoked for the first time in history and that the same members of NATO Hosler is happy Donald Trump insulted stepped up and aided in our defense?

Another post by Hosler sheds light on his problem with NATO. Unfortunately it is premised on the same misunderstanding of NATO’s funding mechanisms that Donald Trump seems to espouse: 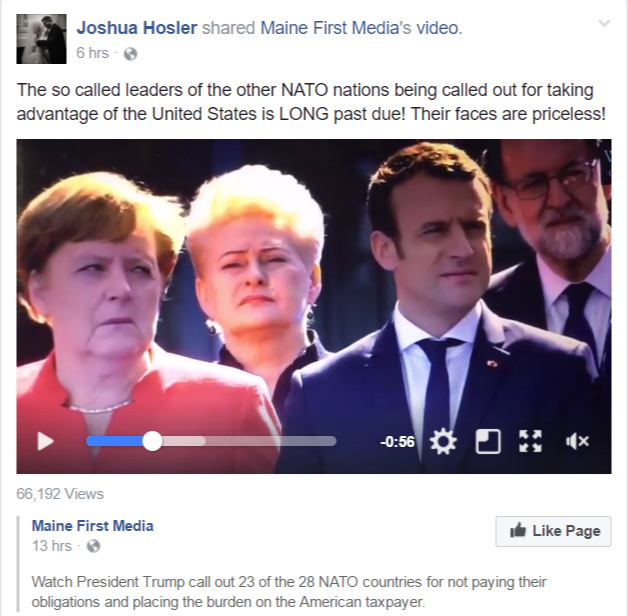 This is off base. Every country in NATO is fulfilling the funding requirement outlined in the treaty in terms of direct funding. Another aspect of funding—indirect funding—is a bit more imbalanced, but the reason for this is the USA’s own desire to project military power around the globe. We spend a larger percentage of our GDP on defense because we operate all around the world, by choice, to maintain power and influence on a global scale. Another thing that Joshua may not know is that as a result of recent aggression by Russia, our NATO partners have been ramping up their spending in recent years, which is making Trump’s claim less and less salient. In other words, the realities of Russian aggression are solving the problem of European “free riders”.

Either Hosler doesn’t know these things, or he has enmity towards our European allies and supports making enemies where our friends used to be. An even worse possibility is that Hosler, like Trump, is objectively pro-Russia, and as a result is happy that NATO is being undermined. If Putin could get one thing on his wishlist, it would surely be the dissolution of NATO, which has kept his country’s aggression in check for almost seventy years.

My suggestion to Mr. Hosler is to crack open a book about the Cold War and understand the vital role NATO has played in the United State’s long era of peace and relative prosperity. And for the sake of our country, quit cheering on a man who seems hell-bent on undermining our national security.