Colorado State Sen. Tim Neville (R-Littleton) has never been shy to broadcast his supposed “pro-life” position. When you look under the hood, however, it seems that he must not care about reducing the abortion rate. How else could you explain his support for policies that would increase abortion rates and make it harder for women to receive life-saving medical care? Today’s example is his support for the so-called “Mexico City Policy” first implemented by Ronald Reagan: 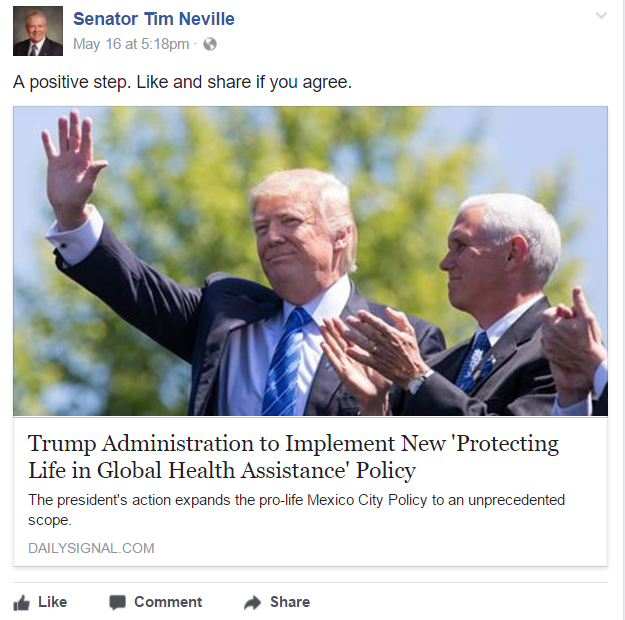 Over the years, this policy has been rescinded by Democratic presidents and re-instituted by Republican ones.

To Neville’s supporters, the policy probably sounds good: stop giving money to organizations that offer abortion as part of their family planning services. Unfortunately, superficial appearances tend to dissipate when they come in contact with the real world, and this is no different.

There are a bunch of studies that show the devastating effect this policy has had on abortion rates, along with maternal and infant mortality. For example, Kelly M. Jones, who works for the International Food Policy Research Institute conducted one such study and lays out the result in stark relief:

Employing a woman-by-month panel of pregnancies and woman fixed effects, I estimate whether a given woman is less likely to abort a pregnancy during two policy periods versus two nonpolicy periods. I find no evidence that any demographic group reduces the use of abortion as a result of the policy. On the contrary, rural women significantly increase abortions. This effect seems to arise from their increased rate of conception during these times. The policy-induced budget shortfalls reportedly forced NGOs to cut rural outreach services, reducing the availability of contraceptives in rural areas. The lack of contraceptives likely caused the observed 12 percent increase in rural pregnancies, ultimately resulting in about 200,000 additional abortions and between 500,000 and 750,000 additional unintended births. I find that these additional unwanted children have significantly reduced height and weight for age, relative to their siblings. Rather than reducing abortion, this policy increased pregnancy, abortion, and unintended births, resulting in more than a half-million children of significantly reduced nutritional status.

Got that? Neville favors a policy that resulted in 200,000 additional abortions. Anyone with more of a thimble-deep understanding of women’s health would have known this. As a sitting member of Colorado’s state legislature, Neville should know the consequences of these funding cuts.