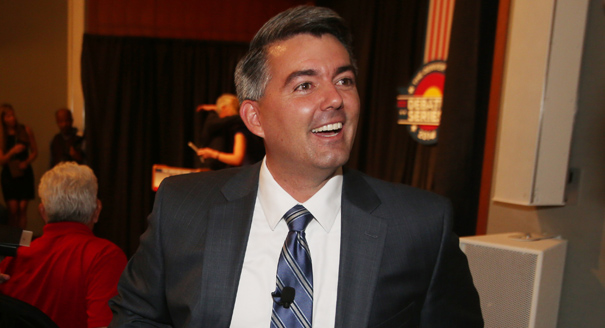 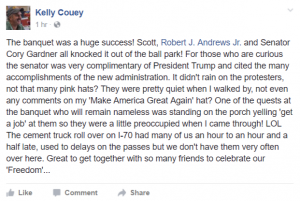 With scores of protesters outside the Hotel Colorado in Glenwood Springs last week, U.S. Sen. Cory Gardner (R-CO) told supporters inside the hotel of Trump’s “many accomplishments,” according to a Facebook post by Kelly Couey, a conservative activist who attended the event.

He also wrote that Gardner was “very complimentary” of Trump at the private fundraising dinner.

“For those who are curious, the senator was very complimentary of President Trump and cited the many accomplishments of the new administration,” Couey wrote in a Facebook post, obtained from a source.

Couey did not return a phone call seeking to find out if Gardner criticized Trump as well, but Couey’s wife confirmed that he wrote a Facebook post about the event.

Gardner’s comments are in line with his 100 percent pro-Trump voting record, but he has nonetheless criticized the president in some public forums and interviews, telling Colorado Public Radio recently, for example, he thought proposed State Department cuts go too far.

Gardner’s warm remarks about Trump at the private the Glenwood Springs event would not have been received well by the protesters outside.

They were upset about a variety of Trump’s positions, including his efforts to defund Planned Parenthood, his hard-line immigration stance, and his environmental policicies, according to the Glenwood Springs Post-Independent, which quoted protesters:

“Cory Gardner is not listening to his constituents. He’s supposed to listen to all his constituents, not just the special interests that can afford to pay him,” said Judi Simecek of Carbondale.

Zoe Yost, from Glenwood Springs, said she was there primarily to fight the effort to defund Planned Parenthood, as the organization had provided her with health care at a time when she was without insurance.

Gardner ran on promises to be a moderate senator, but he has turned into one of the most partisan members of the Senate, said Ryan Yost

Protesters were reportedly chanting, “We want a town hall.”

While Gardner has spoken at numerous private events, like the one at the Hotel Colorado, he hasn’t held a town hall meeting this year. All the other members of Colorado’s congressional delegation have taken questions from constituents at in-person town halls.

Gardner has instead chosen to hold conference calls, including one earlier this week that was live streamed on Facebook.

“Tele-town halls provide us with a great way to reach thousands of Coloradans at one time instead of just five or 10 at one time,” Gardner told a conservative radio host in February.

Gardner does not return this reporter’s calls seeking comment.

Couey, who wrote the Facebook post, obtained from a source, about Gardner’s private event in Glenwood Springs, appeared in an I-Am-Created-Equal video prior to the 2014 election criticizing Democratic Sen. Michael Bennet for his support of Obamacare.