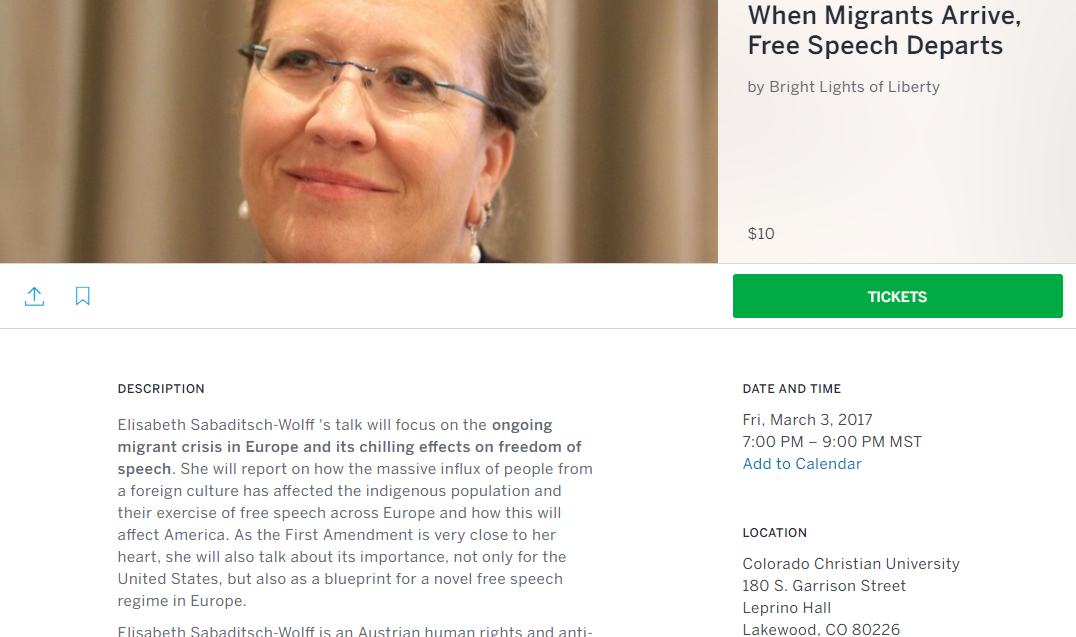 Sabaditsch-Wolff is the daughter of an Austrian diplomat who grew up in Kuwait, Libya and Iran. She has become a radical anti-Islamic crusader and was charged with hate speech in Austria for her statements about the Prophet Muhammad.  Although she has appealed the court’s ruling, it has been upheld as far up as the Austrian Supreme Court and is now awaiting a final appeal in the European Court.

Sabaditsch-Wolff is on a mission to warn the American public to avoid the rapidly approaching fate of Europe. That fate is the invasion by Muslim jihadists intent on destroying western culture and imposing global Sharia.

The refugee crisis is, in Sabaditsch-Wolff’s estimation, a fabrication by Islamists, the mainstream media, the European Union and George Soros in order to end the European nation-state and create a “multicultural Europe.”

In a talk she gave for ACT! For America in Dallas, Texas, Sabaditsch-Wolff gave her opinion on U.S. Immigration,

“Your migration wave includes more Latin Americans than Muslims, but thousands of Muslims are indeed arriving. And an undetermined number of ‘Latin’ migrants who walk across your southern border are in fact Muslims from the Middle East, who have acquired forged papers and learned a little bit of Spanish so that they can pass for Mexicans when they arrive in Laredo or San Diego.”

Sabaditsch-Wolff hopes to preserve western “democratic and secular values,” especially “those of persecuted Christians and Jews.”

Sabaditsch-Wolff’s upcoming talk will be held March 3, at 7 pm. The flyer advertises this as an event for people who agree with the following questions: “Are we still one free people with one common culture? Do we need secure borders and the rule of law? Do our rights come from God? If you agree the answer is yes, we invite to join our cause.”

Turning Point USA is an organization for the recruitment and advancement for young conservatives on U.S. college campuses. One of its main projects is creating a professor watch list. “The mission of Professor Watchlist is to expose and document college professors who discriminate against conservative students, promote anti-American values, and advance leftist propaganda in the classroom,” states Turning Point USA

Some have associated Turning Point USA with the Alt-Right white supremacist movement. It were one of the main organizing bodies behind Milo Yiannopoulos’s college tour, including booking him at CU Boulder. The founder Charlie Kirk writes for Breitbart News.

Kirk will be speaking at the conference as well as other conservative free market advocates including Jennifer Schubert-Akin of the Steamboat Institute and Brent Hamachek of Segueway Solutions.

Ivan Thorne will also be a keynote speaker. Thorne is the self-proclaimed Dark Triad Man, a masculine focused self-help guru who seeks to reclaim manhood, through the dark triad of narcissism, Machiavellianism, and psychopathy. Thorne advocates violent opposition to antifascist activists, and masculine supremacy. Thorne is a free speech advocate, the biography on his website states,

Denver Action Network is encouraging people to call the Grand Hyatt to urge them to cancel the event. It also held a picket of the Hyatt last Tuesday.