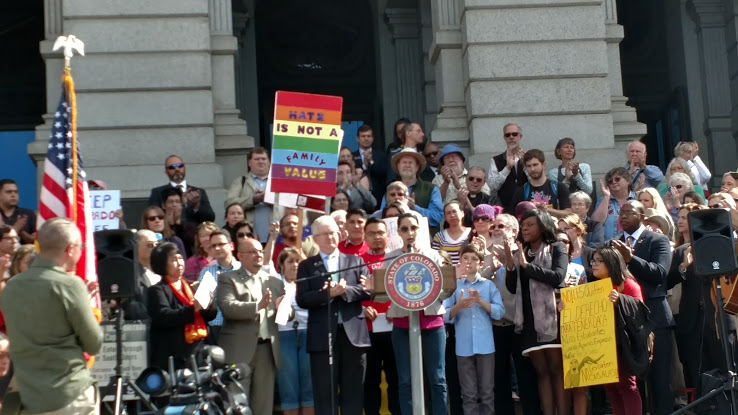 State Rep. Joseph Salazar (D-Thornton) announced at the Protect our Muslim Neighbors Rally, that he was committed to showing up for Colorado’s Immigrant community and was introducing a bill titled the Ralph Carr Freedom Defense Act.

Gov. Ralph Carr (R-Colorado) was Colorado’s governor during World War II who famously protected the rights of Japanese Coloradans, while across the country an executive order forced millions of Japanese-Americans into internment camps in the name of national security. Carr famously said, “If you harm them, you must first harm me.”

Salazar pays tribute to Carr’s example. His bill will make it so that no state resources can be spent on aiding in illegal and unconstitutional executive orders which discriminate against any group of individuals. The bill seeks to protect immigrant communities, preventing  any registry or interment, arrest, or detention of any Coloradan based solely on their religious or ethnic background, national origin, or race.

Several speakers came forward, on the west steps of the Capitol, in support of the bill, including Sen. Daniel Kagan (D-Arapahoe), Jo Ann Fujioka who was detained as a small child in a Japanese internment camp, Jhovani Becerra of Padres y Jovenes Unidos, Iman Jodeh of Meet the Middle East, and Rep. Daneya Esgar (D-Pueblo) . The purpose of the press conference, Salazar stated, was to allow the community to voice its support, while highlighting the personal stories and concerns which prompted Salazar to run his bill.

Jhovani Becerra shared his experiences living in fear due to immigration status,

“Imagine walking home from school knowing that your dearest closest ones could be gone and taken away.  Those thoughts surrounded me, making it difficult to pay attention in class. The internal battle continues, but we must not let our voices be drowned by the waves of injustice.”

Iman Jodeh shared her vehement support for the bill.

“When my father was going through chemo here in the U.S., before he passed, he said, ‘Iman, this is the greatest nation on earth, and God has truly blessed the United States of America. We should be here, we have the right to be here.’ […] All of the work he did to build bridges with the non-Muslim community and the Muslim community are at risk, and that’s a shame. Shame on you, Donald Trump! And shame on anyone who is against this bill! This bill is all-American and if you know what American standards and values are, you should vote for this bill.”

The bill is currently being heard in the House Judiciary Committee.